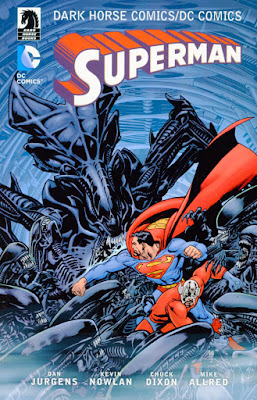 Dark Horse Comics/DC Comics: Superman (Dark Horse/DC Comics) So a few months back I was going through my vast comics midden as part of a (sadly, still ongoing) reorganization project, during which I noticed that I had the first and third issue of the Superman/Tarzan: Sons of The Jungle crossover, but not the second, and found myself wishing they would collect it in trade, as that would be a lot easier to buy than to try tracking down the second issue–plus then I could get rid of those single issues.

And guess what? That story is in here, along with two Superman/Aliens crossovers and Mike Allred's Superman/Madman Hullabaloo. I've only read parts of the Tarzan crossover before and the Madman crossover, so the bulk of this collection is brand-new to me. But, as the above anecdote implies, it is basically a book that I was wishing for recently, so I'm glad to have it.

I obviously haven't read it just yet, but I'm just including it here since I did buy it at the shop this week. I'm sure I'll have a full review eventually. 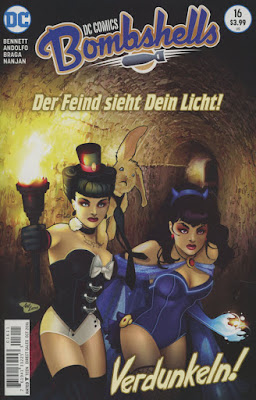 DC Comics Bombshells #16 (DC) As writer Marguerite Bennett continues to expand the cast of her What If Scantily Clad Ladies Fought World War II When They Weren't Too Busy Flirting? comic, and delve deeper into the back-stories of those characters, it seems like the series may have lost a bit of focus. But then, those new characters are all so fun, and the back-stories often so engaging, that it's difficult to fault Bennett for these indulgences, either. Plus the art is, as always, amazing; ideally the series would have but one artist, but both Mirka Andolfo and Laura Braga (who draw this issue) are both great artists.

The two groups of characters who met underneath the streets of Berlin last issue–Harley Quinn, Poison Ivy, Catwoman, Batwoman, Renee Montoya, Zatanna, John Constantine and Raven–are met by still more allies, these ones lead by rockabilly Huntress and her "swing kids" rebels, including this universe's versions of Speedy/Arsenal (Rudi Harpfer) and Lady Nighthawk (Zinda Bleier).

Batwoman pulls Huntress aside to lecture her on how war isn't a kid's game, and we see extensive flashbacks starring each. Huntress, a German, tells her origin story and how she can't stand to stand idly by while her country commits atrocities. Batwoman, meanwhile, tells her what I guess is the Bombshells version of "A Death of The Family," when she and Renee saw their teenage mascot/ally Jason brutally gunned down during the Spanish Civil War (by a red-haired woman wearing a safari outfit with animal print highlights–I imagine she's supposed to be this book's version of either The Cheetah Priscilla Rich or perhaps original Huntress Paula Brooks).

The second half of the book checks in with Mera, and we learn Arthur Curry's secrets, and the secrets of his lighthouse and his island, and the pair travel to Atlantis to deal with the fucked-up political situation under the sea, which has only been hinted at before. This too involves rather lengthy flashbacks, detailing Mera's origins and what this version of Atlantis is like.

As I said, the book seems to meandering a bit–there's still a good four more years worth of World War yet to be fought–but the art is great, the constant reinvention of more and more of DC's character catalog is fun and, appropriate given the source material, the costume designs are appealing and sometimes even surprising. I suppose it's counterintuitive given that these heroes are set in 1941 rather than adventuring in 2016, but some of them boast much better, cooler costumes than their contemporaries. I mean, this Huntress and this Raven look far cooler than they do these days, or have at any time during the last few years. 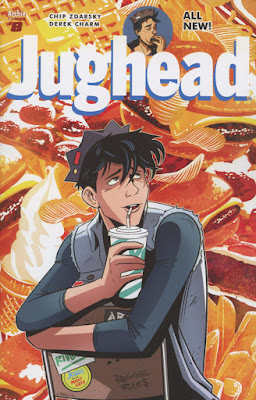 Jughead #8 (Archie Comics) Well, this is the last issue of Chip Zdarsky's run on Jughead (for now...?), which I would normally find to be devastating news, given that this is one of my favorite, and probably the funniest, comic book I'm currently reading in this good old-fashioned, paper-and-staples format. I'm not devastated, however, because the guy following Zdarsky just so happens to be one of my favorite writers-of-funny comics, Ryan North (Whose Unbeatable Squirrel Girl is the only Marvel comic book funnier than Zdarsky's Howard The Duck*).

This issue concludes Zdarsky's two-parter with artist Derek Charm, in which Jughead and Archie have gone camping together to try and reconnect, only to find a variety of dangers in the woods, ranging from a bear attack to a Mantle family reunion. It's good stuff–and surprisingly emotionally potent–but it seems like a rather small story for Zdarsky to go out on after the six-part epic story that launched his eight-issue run. That is, in part, why I wonder if(/hope) he'll return to script future issues at some point.

Charm's artwork is charming (Ah ha ha ha! Get it?). I think his particular style may be even better-suited to the book than that of Erica Henderson, who drew the first six issues. Zdarsky's style was so different it did the job of providing a strong, aesthetic break from "old" Archie Comics, but Charm's style finds a nice balance between the "new" Archie Comics and the flatter, more cartoony old "house style." I'm glad to hear he's sticking around for the beginning of North's run.

There are a couple of pages in here where his work reminded me of that of Gilbert Hernandez, which...well, that's an artist any cartoonist should be happy to evoke thoughts of in his readers.

In addition to the above-mentioned conflicts, this issue also contains a lot of Mr. Weatherbee, the introduction of Mrs. Weatherbee and a new member of the Mantle family, as well as a pretty awesome flashback to the 1970s. Oh, and there is, of course, a classic back-up story to help justify the $3.99 price tag; this one in the form of a Frank Doyle-written, Bill Vigoda-drawn story in the style that Zdarsky told large portions of his first story arc in. 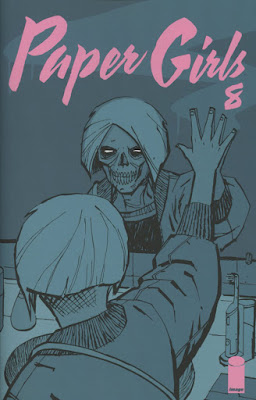 Paper Girls #8 (Image Comics) I suppose I could pretty much just run the same paragraph about this book with each consecutive issue. A bunch of weird stuff happens that continues to ensure that the narrative never settle down into anything remotely expected, and it ends with a killer cliffhanger that seems to make the story veer off into a completely different direction than what the previous pages might have lead a reader to believe. It is almost peerlessly drawn. There are some touches of local, Cleveland-area color.

Yeah, that would work for the previous seven issues or so of Brian K. Vaughan and Cliff Chiang's Paper Girls. I imagine it will also apply to the next seven as well, unless, Vaughan all of a sudden settles into something more predictable with his story of time travel and bizarre animals made into monsters by their sheer size or how out-of-place they are.