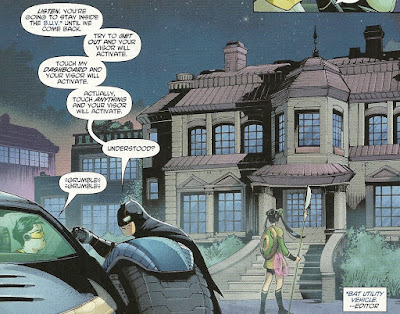 The Bat-Man of China, the country's answer to the Batman, drives not a Batmobile, but a BUV. BUV, naturally, stands for Bat Utility Vehicle.

While  have to assume the real Batman has an SUV or 10 in his Bat-Cave and another dozen in Bruce Wayne's above-ground garage, I don't think he's ever gone so far as to brand any of his sports utility vehicles as "Bat Utility Vehicles," so bravo to the Bat-Man of China (and, of course, writer Gene Luen Yang).

This is what the BUV looks like, as drawn by pencil artist Viktor Bogdanovic, inker Richar Friend and the colorist/s of Hi-Fi:

Both images are from the pages of New Super-Man #2, which remains as well-written and entertaining as the first issue was, but also remains rather poorly illustrated, especially when stacked up against pretty much everything else Yang has written before.
Posted by Caleb at 3:29 PM