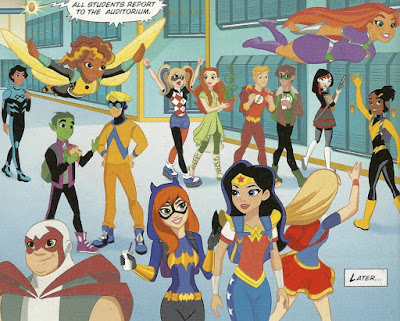 I recently reviewed the first DC Super Hero Girls graphic novel for School Library Journal's Good Comics For Kids blog and, somewhat to my own surprise, I liked it a whole lot.

Why was a I surprised? Well, I'm obviously pretty far outside of the target demographic for the Mattel toy-line from which this graphic novel and other tie-in media sprung. They're not toys I'd play with or collect, the cartoons didn't look like anything I'd watch, I'd certainly not read the prose chapter books, but comics? Yeah, I'll read those. When the line was first announced, it just sort of confused me. I didn't like the over-busy designs of most of the characters–Katana, Poison Ivy and Harley Quinn were the only ones I found aesthetically pleasing–although I suppose it's worth noting that some of the poor designs are improvements over The New 52 designs (Well, Supergirl's, anyway).

Also, I guess I just didn't get the premise: All of DC's superheroes and some of their villains are high schoolers. Is this Justice League Unlimited meets Beverly Hills, 90210...? No. But it is Justice League Unlimited meets Saved By The Bell, and that's close enough for me! Check out the hallway scene above, which comes early in the book and is the point where I started to get into it. You have some of the "girls" who are the focus of the toy line, plus some Teen Titans, some founding Justice Leaguers, Blue Beetle, Hawk (sans Dove!), Animal Man and, a character who by process of elimination I've determined must be either Black Lightning's daughter Thunder or Lightning.

There are some deep, deep DCU cuts for a book like this, as the Silver Age Elasti-Girl shows up in a panel with Bunker, The Ray and a hooded Mary Marvel (whose name goes unspoken) are in another, there's Vibe opening his locker in the background of one panel.

What's interesting about all of this is that in attempting to provide as diverse a line-up of dolls/action figures, and as diverse a student body as possible, they had to dig pretty deep, eschewing the legacy versions of some characters (there's no Jason Rusch Firestorm, no John Stewart Green Lantern, no Ryan Choi version of The Atom, etc), but used plenty of relatively minor characters who are black or Asian or Hispanic: Thunder (or Lightning?), Xs, Bumblebee, Katana, Lady Shiva, Vibe, Bunker and so on.

This has long been an ongoing discussion in bringing diversity to super-comics–creating new non-white characters vs. giving the names of white characters to non-white characters–and while both methods have their merits and drawbacks, this looks like a good compromise. Rather than creating brand-new non-white characters unlikely to catch on, or keep adding new, non-white Green Lanterns or passing the mantles of The Atom or Firestorm or Blue Beetle (wait, that last one's a bad example, as Jaime is the Beetle in here...although, he's the primary Beetle in mass-media), seek out the relatively minor minority characters and focus on them.

Sure it may look forced to a terrible old man like me, who will glance at the cover of the book and immediately realize that Bumblebee and Katana don't exactly seem to "fit" with Wonder Woman, Supergirl, Batgirl and even the Bat-villains Harley and Ivy (kinda surprised they're there and Catwoman is relegated to a one-panel cameo, actually), but this isn't a comic for Caleb and, as one reads, this is a brand-new, self-contained world, so it doesn't matter if Wonder Woman hails from the Justice Society and Justice League while Bumblebee was a minor Teen Titan and Katana a member of The Outsiders, because here they're just classmates at Super Hero High, you know?

I appreciated the sense of humor that went into staffing Super Hero High. Above you see phys-ed teacher Coach Wildcat, Crazy Quilt teaches a class on costume design, Gorilla Grodd is the Vice Principal, and Amanda Waller the principal. Art Baltazar and Franco's Tiny Titans did something similar--and also got there first with a "Finals Crisis" joke--with various Titans villains on faculty at Sidekick Elementary (There, Dr. Light taught science, Slad Wilson was the principal, Darkseid was the lunch lady and Lobo handled phys-ed). Anyway, look at Wildcat's awesome/dumb little cat-ear hoodie...! That's adorkable. 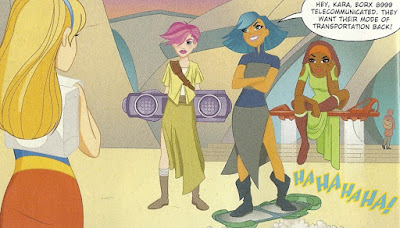 Okay, I know I shouldn't laugh at the bullies' jokes, but this Kryptonian mean girl's diss of Kara Zor-El for riding to school on horseback in this flashback sequence was pretty good. They also make fun of the fact that she has her house crest (i.e. the S-sheild) on her clothes and backpack, which is akin to having your mom write your name on all yours stuff so you don't lose it, and they push her in a very conspicuously-place mud puddle, which looks like it is only there to push bullied students into.

We shouldn't feel too badly for Kara, though. Just remember, all of those Kryptonian mean girls died with the rest of Krypton! You know what they say; surviving the eradication of pretty much your species is the best revenge!

While I'm laughing at Kara, I particularly liked that she got a little circle with a line through it attached to a big diamond, which is Kryptonian for "F" (It wasn't entirely her fault, though; the super-mean girls sabotaged her project by screwing around with her horse). 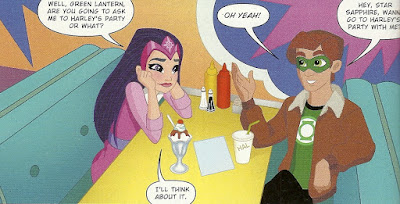 I also appreciate that writer Shea Fontana captured Hal Jordan's core characteristic so clearly: Hal is dumb. Not only do we see Star Sapphire asking him to ask her out so she can say maybe here, but note the fact that he wears a mask (as well as his dumb bomber jacket) and she calls him "Green Lantern." But check out his cup. Apparently when the server at The Max or wherever they are asked what name to put on his drink order, he said "Hal" rather than "Green Lantern." The poor sap hasn't even finished his first semester of high school, and his secret identity has already been compromised!

So yeah, this turned out to be a pretty fun comic.
Posted by Caleb at 5:07 PM

It is true. No matter what iteration, Hal is always as dumb as a bag of hair.