I still think this is funny. 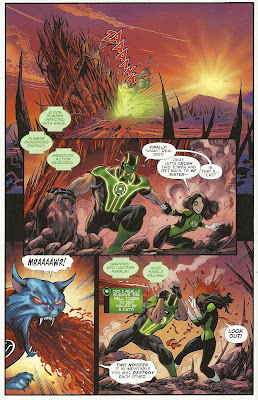 That's the second-to-last page of Green Lanterns #4, by writer Sam Humphries and so many artists that you wouldn't believe me if I told you how many there were (Okay, I 'll try. It's nine. It took three pencil artists and six inkers to draw this 20-page book...that bi-weekly schedule's looking like it might be such a great idea, huh?).

It's been years since former Green Lantern writer Geoff Johns first introduced Red Lantern Dex-Starr, a perfectly ordinary house cat from Earth who earned a Red Lantern ring, which he wears on his tail. Like all Red Lanterns, Dex-Starr now vomits laser-blood that burns like napalm. It's been years, but man, Dex-Starr's existence still hasn't ceased to amuse me.

I particularly liked Green Lantern Simon Baz's set-up to his appearance, the "Is that a...cat?" line.

Labels: dex-starr, phoning it in