And he's humble, too 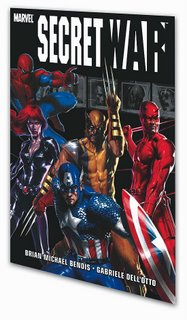 I was somewhat surprised by the word choice in the solicit for Secret War on Marvel.com.

"Starring Wolverine, Spider-Man, Daredevil, Captain America, Black Widow, Luke Cage and more! Brian Michael Bendis, the most popular and acclaimed writer in comics, reveals the darkest chapter in Marvel Universe history! When Nick Fury discovers a disturbing connection between many of Marvel’s deadliest villains, he assembles a ragtag team of the MU’s most misunderstood heroes for a secret mission to do what the U.S. government could never allow – eventually leading to a super-powered blowout between a who’s who of NYC heroes and mutants! Featuring the American debut of the stunning, fully painted work of Italian artist Gabriele Dell’Otto."

Anything strike you as a little odd about it? (Here’s a hint: Re-read that second sentence). Now I don’t begrudge whoever the hell wrote this particular solicit for making with a hard sell; it’s essentially ad copy, and an ad copy writer is expected to make the product seem as appealing as possible, but there’s a difference between exaggerating and crazy talk. Why not just say, “Brian Michael Bendis, the three-headed, winged man-monster with fingers made of pure gold.”

Or is Bendis really the “most popular and acclaimed writer in comics?”

I find that hard to believe. Certainly, Bendis is a good comics writer. Hell, he’s a great one, and a hard-working professional who has mastered several different genres. But he’s not “the most acclaimed writer in comics.”

The argument can be made that he’s the most popular, if one bases it simply on New Avengers's regular spot as the number one-selling book in the field, but it’s a qualified “most popular,” as it simply means he writes the best-selling book of that particular month.

But I don’t see how anyone could even make an argument that he’s the “most acclaimed,” as vague as that phrase is.

Ask anyone who the best comics writer is, and they’ll tell you it's Alan Moore. Maybe you’ll find a few people who will say Grant Morrison, Neil Gaiman, Harvey Pekar or Frank Miller, but more likely than not they’re only saying that because they know you expect them to say Alan Moore, and they want to stand out from the crowd. But Alan Moore is easily, pehraps even inarguaby, the most acclaimed writer in comics, just as he has been for decades.

But let’s look at it another way—who is it that’s doing the acclaiming, and where are they doing it at? Bendis is a talked-about writer, no doubt about that. There isn’t a superhero comic book-related website in the world that doesn’t discuss his work (it's a rare week where he doesn't come up in Best Shots column at Newsarama, for example), and I’d wager at least 75% of those discussions are positive ones, though love for Bendis is hardly universal.

But when was the last time you heard anyone in a mainstream non-comics publication or venue discuss Bendis’ work?

I honestly can’t remember the last time I did. Hearing him called the "most acclaimed writer in comics" sounds especially odd in the fall of 2006, after the entire English-speaking mediascape has devoted some form of positive coverage to Alan Moore these past few months due to the recent release his latest magnum opus Lost Girls, and relative newcomer Brian K. Vaughan’s script for Pride of Baghdad received similar coverage.