What If Marvel Published the What If Specials I Really Want To Read? 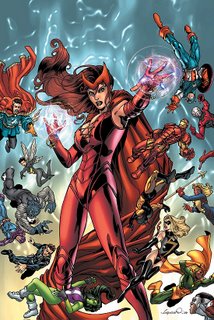 Wednesday Marvel kicked off it’s 2006 round of What If? specials, which revisit recent hot storylines like Wolverine: Enemy of the State and X-Men: Deadly Genesis and explore how they might have gone down differently.

It’s not a bad idea. It’s certainly a marketable idea, and truer to the original intent of the What If…? comic book series than last year’s specials, which focused on characters in different settings, and thus more closely resembled DC’s Elseworlds, and all had rather bland titles, like What If: Thor, What If: Captain America, and so on.

I was a little disappointed in What If? Featuring The Avengers Disassembled, however, and it got me thinking about the problem of these sorts of non-continuity stories in general, how fans tend to hold them to a higher standard than they would “616” stories because, ultimately, they don’t “count,” seeming to boast an even greater level of unreality than the rest of Marvel’s equally fictional stories.

Thinking about alternate universe stories the Big Two, it seems like it’s a rare one that really succeeds on it’s own as a great story (The Dark Knight Returns and Watchmen spring most immediately to mind), and those aren’t the sorts of stories a publisher can plan to release (If they were, I’m sure DC and Marvel would be only too happy to keep publishing Watchmen-quality stories every week). The lesser alternate universe stories I’ve enjoyed usually contained an incredibly talented artist riffing on the classic mold of iconic characters, and pouring out admirable designs. For example, Paul Pope’s Batman: Year 100 was merely a mediocre story, but seeing Pope’s take on Batman, his costumes and his vehicles justified the experience for me.

It’s too early to judge the remaining four Marvel What If?s of 2006, of course, but based on this first one, they don’t seem like they’ll have really inspired takes, nor are the artists involved seemingly given free reign to radically redesign the territory they’re working.

So in the comic book reader’s version of fantasy football, I thought I’d offer my suggestions for What If? stories I’d rather read. It’s never too early to start planning for fall of 2007, Marvel editors. The criteria is simple: Here’s five What If? stories, all phrased in the form of a questions, as they should, with suggestions on who would make for the ideal creative team.

1.) What If Hawkeye Just, Like, Took His Quiver Off? This year’s What If? event returns to the scene of the crime against Avengers history and fandom that was Brian Michael Bendis’ “Avengers Disassembled” story. As a late-comer to the title (I actually didn’t even start reading it monthly until Bendis joined the creative team), I didn’t much mind any of the portrayals of the character in this story, and it didn’t occur to me how silly Hawkeye’s death really was until I heard someone else point out that he could have just took his quiver off before it exploded (Think about how many times you’ve seen a movie, TV show or comic where the hero jumps from a moving truck/tank/plane/motorcycle/pegasus* at the very last minute, rolling to safety as it explodes taking out an enemy base/fortification/truck/plane/spaceship).

Admittedly, Hawkeye simply surviving “Avengers Disassembled” isn’t all that interesting a story, but it would make for a neat hook to parody the New Avengers series to follow, as the loud-mouthed archer and long-time Avenger could act as the voice of the more persnickety Avengers fans in the face of the changes that would follow. (I see a sub-plot where Clint Barton feels strangely attracted to mysterious newcomer Ronin and fights against these strange new feelings—“What’s wrong with me? I’ve always thought I was all man, and yet there’s something about this brawny new guy that attracts me…”—only to be greatly relieved when it’s revealed Ronin is actually a hot chick wearing a padded man-suit for some reason.

Dan Slott would seem like an ideal writer for such a story, being Marvel’s go-to funny guy, although Defenders: Indefensible co-writers Keith Giffen and J.M. DeMatteis could certainly pen a funny superhero tale (they’ve already hilariously parodied Hawkeye’s last words in “I Can’t Believe It’s Not the Justice League”). But after reading Stan Lee Meets Dr. Strange #1, I think it’s clear that nobody parodies Bendis better than Bendis himself. As for art, let’s give it to Mark Bagley; he worked well with Bendis on that Stan Lee story (and a few hundred other stories).

2.) What If it Really Was Clint Barton Impersonating Daredevil? When Ed Brubaker and Michael Lark took over as the creative team on Daredevil, one of their earliest stories dealt with Daredevil running around Hell’s Kitchen going about his normal Daredevil-ing, while Matt Murdock was stuck in a jail cell, and clearly wasn’t in the suit. Who was in the suit became something of a mystery, a mystery Marvel accidentally spoiled when the cat was let out of the bag in another book early. To cover—and use the mistake to pump up the mystery further—Marvel released more names of who it actually was in the red pajamas.

One popular candidate was Clint “Hawkeye” Barton, a name Newsarama.com posters had been throwing around for weeks anyway. Well, what if it was Barton, asked to take over for Murdock by their mutual former lover, the Black Widow?

I don’t know, but seeing as this was one of the bigger mysteries of the past year of Marvel Comics, it seems like it would be ripe for covering in a What If? (next year, after all the wait-for-the-traders can enjoy Brubaker and Lark’s story without accidentally getting spoilers in a silly What If? story).

For the creative team, let’s say up-and-comer Matt Fraction, who’s writing upcoming ongoings featuring two other Marvel street-level heroes (and whose Five Fists of Science proves he kicks all sorts of ass), on story chores, with Marvel E.I.C. Joe Quesada handling the art, as penance for misleading ‘rama readers about who was in the devil suit (saying cryptically that wherever Barton was, he was having “a devil of a time.”).

3.) What If Black Panther Started His Own Avengers? The current Black Panther series has certainly had its ups and downs, sometimes within the same story arc, but my favorite half-story thus far was the one collected in Black Panther: Bad Mutha (Don’t look at me; I didn’t name it), in which Panther teams up with Luke Cage and several other heroes. At one point, the Falcon swoops by a crowd scene just after Cage and T’Challa had vacated the premises, and a bystander asks about them forming an all-black super-team.

I can’t imagine Marvel ever actually doing just that in continuity, but it would make for a sweet What If? one-shot, wouldn’t it? While there are no shortage of black Marvel heroes who could fill out a Black Avengers roster (some of whom are even still alive), if we stuck with the line-up of guest stars in Bad Mutha, we’d be looking at a team consisting of Panther, Cage, Falcon, Blade, Brother Voodoo and Shang-Chi, Master of Kung Fu. Yeah, Shang-Chi’s not black, which would make for a nice running joke, should he find himself on a team called the Black Avengers (although a token white character would be even funnier than a token not-black one like Shang-Chi).

Hudlin would pretty much have to write this (hey, it was his idea!), the controversy of which alone ought to pump sales up high enough to justify it’s existence (Don’t ask me why, but everything Hudlin touches turns to message board controversy). As for his artistic collaborator, there’s no one I’d rather see draw a book like this than Kyle Baker, who drew Hudlin and Aaron McGruder’s Birth of a Nation. Based on his cover of Back Issue #8 featuring Storm, I’d love to see Baker handle more Marvel superheroes. Additionally, Baker’s art is so incredibly individual that even if the story ends up being terrible, it would justify the book’s existence by allowing us to see Baker’s version of The Panther and Brother Voodoo.

5.) What If Marvel Westerns, Marvel Romance and Marvel Monsters Were All One Event? Okay, this one might be a tougher sell, but I did say this was simply a list of What If? stories I’d like to see, didn’t I? Over the course of the past year, Marvel has dusted off three genres that the company traditionally had a great deal of success with, back before the mainstream comics market became all superheroes, all the time.

In the case of the Western and Monster books, they published a series of special #1 issues, each featuring a different monster or western hero in the cover story, back-up feature and at least one reprint of a classic story from the vaults. In the Romance specials, the I (Heart) Marvel event, they paired Marvel superheroes in stories focusing on love and relationships, some of which were quite silly (I’m thinking of the Doop one here), and some of which were quite awesome (like the Tom Beland story in I (Heart) Marvel: Web of Romance, easily one of my favorite Spider-Man stories in years).

For this What If? special, the focus would be romance comics featuring famous Marvel western heroes falling in love with infamous Marvel monsters, so we’d have, like, Devil Dinosaur cheating on Moonboy with the Rawhide kid, the Phantom Rider wooing Monstrollo and the Two Gun Kid learning that giant Chinese dragon-in-shorts Fin Fang Foom has a crush on him, and that the bigger they are, the harder they fall—in love!

Each of these three Marvel events had an almost embarrassing wealth of talent involved in them, and frankly any three of the writers and any three of those artists could probably make a book this weird work. Just so long as Eric Powell, who handled all the covers for the Monster and Western events, provided the cover.


*Actually, I’ve never seen it happen with a pegasus, but that’d be awesome. Maybe in 2008 Marvel could publish What If Captain America Was Flying on a Pegasus With Dynamite Duct-Taped All Over It’s Body and Steered it Right at the Red Skull’s Base, Jumping Off at the Last Minute and Rolling to Safety as it Exploded? Hmm…not bad, but the title needs work.
Posted by Caleb at 7:26 PM

I dunno about Baker on hero books. As terrible as the story on "Truth: Red, white and black" was, his art made things far worse. Of course, I thought that entire series was the poor execution of a good idea.