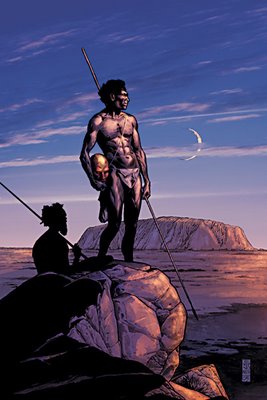 52 #28 (DC Comics) Nitpicks first. Again with the interior dialogue from Renee Montoya? Sheesh. Re-reading the opening section twice, there’s absolutely nothing that narration adds to the scene that isn’t there already, and it hurts the overall POV of the series. Also, something to keep in mind for the trade collection: The datelines identifying where certain scenes are taking place seem to come and go. No big deal, but a grating little inconsistency. As for the plot, it’s apparently fight week, as Montoya and the Question team up with Batwoman to take on Intergang, the “New Look” Red Tornado, called “Tornado Man,” fights against uranium development in Australia, and, finally, our space-faring heroes go up against Ekron and his/its passenger. The space story gets more and more complicated each chapter, and they’re starting to lose me completely on it. The most frustrating part of the book this week, however, is this week’s DC Nation column by Jann Jones. The photo of Ms. Jones looks like a live action JLI cover, and I read the whole damn thing looking for some explanation as to who that is dressed in the sweet Blue Beetle pajamas next to her, but no dice. One more mystery for the most mysterious title on the shelves, I guess. Confidential to Jann Jones: Speaking of alpacas, I’ve got a sweet pitch for an Alpaca Man miniseries, if you’re interested.

Aquaman: Sword of Atlantis #45 (DC) Chronic lateness scores another casualty, as I’d forgotten a good half of what was going on the last time an issue of ASOA actually came out. This coupled with the announcement that the current creative team is on the way out assigns an unfortunate lame duck status to the title. Still a good read, but the current readers are asked to swim against just seems to get stronger and stronger.

Astonishing X-Men #18 (Marvel Comics) And speaking of lateness, it’s all but destroyed the best X-Men book on the stands, which I now sincerely wish I was patient enough to have simply waited to enjoy in trade. Joss Whedon’s dialogue is fantastic—I particularly enjoyed the exchanges between Wolverine and Beast, and between Danger and Ord—and his complicated plot seems to be building not only on his previous arcs, but some status quo from the good old Grant Morrison days. But it’s a lot to keep track of in the long months between issues. Confidential to Dr. Hank McCoy: Was an invasion of the mansion the best time to take a break and change into the old three-piece suit and bowtie?

Birds of Prey #100 (DC) One of DC’s most consistent title’s reaches a rather remarkable milestone, made even more remarkable when one considers that almost half of those 100 issues were written by the same creator, Gail Simone. There’s no time like a milestone for a dramatic change to the status quo, and Simone takes the opportunity to dramatically change the successful formula of the book from a Black Canary/Oracle team-up book—a formula that’s seen some tinkering over the years–into a sort of Ostrander-era Suicide Squad or early era Justice League Task Force style book, with Oracle recruiting whatever heroine is needed for a particular job (To borrow a TV metaphor, she’s Charlie, and all the women of the DCU are potential Angles). This time out, it’s Manhunter, the new Judomaster (Um, shouldn’t it be Judomistress?) and Big Barda, in addition to regulars Huntress and Lady Blackhawk. As fun as it was to see so many characters cameo-ing—new penciller Nicola Scott sure gets a workout in her first issue—the story seemed as stupid as it was fun, with a lot of goofy moments that felt far too forced (The thought of seven-foot-tall Apokalyptian alien/Justice Leaguer Big Barda doing undercover work, Huntress and “Judomaster” stuffing their silly masks under baseball caps as disguises, “Judomaster” existing at all). Then there’s the small matter of the new villain, another needless legacy character whose punchline introduction seems funny in a way that’s not organic to BOP’s usual character-driven humor. Better by far is the back half of the book (co-written by Tony Bedard), in which Black Canary essentially tells her life story to young Sin. Paulo Sequiera’s pencil art is a little stiff and overly pose-driven, but it’s a nice Canary story that certainly belongs on this list.

Civil War #5 (Marvel) The last issue of Mark Millar’s Civil War was an especially dramatic one, ending on a cliffhanger that was the controversial series’ biggest, dumbest Big Dumb Moment. It’s quickly eclipsed by the Big Dumb Moments of #5, which, unfortunately, turns out to consist of nothing but Big Dumb Moments. There’s been a lot of online handwringing about how out of character certain characters have been in this series, but throughout the first half, Iron Man, Captain America, Reed Richards, Spider-Man and the others at least seemed to be acting in character within this series itself (if not with storylines from five to forty years ago). But here, even interior logic of the miniseries is rapidly falling apart, and the previously infallible art team stumbles on a few panels.

The Escapists #5 (Dark Horse) Wow, there’s so much great art in this issue that writer Brian K. Vaughan is vastly out-numbered. You have a Paul Pope cover (you can never go wrong with Pope drawing a cute girl), with Jason Shawn Alexander’s highly expressionistic interior art on the Escapist scenes and Steve Rolston’s cartoony art on the creators’ scenes. Now that the plot seems more focused on the conflict over character rights than the character conflicts (and local color, my favorite part of the series), some of the drama seems to have drained out of the series, but the first four issues were so strong, a slightly disappointing #5 is nothing to get too worried about, especially since there’s only one more issue to go.

New Avengers #25 (Marvel) Another issue of New Avengers, another issue that has fuckall to do with the Avengers, New, old, mighty, assembled, disassembled, re-disassembled or otherwise. This issue’s only Avenger is Iron Man, who spends a majority of the issue flat on his back, silent and waiting to die. The real hero of the piece is either his “disgruntled employee” that’s trying to kill him, or SHIELD Director Maria Hill; who you root for will likely depend on how big a douchebag you think Stark’s been since the start of the “Civil War” story. It would have made a decent issue of Iron Man or a theoretical Maria Hill, Agent of SHIELD monthly, but it makes for a bad issue of an Avengers comic, even one like New Avengers, which is fairly often all but Avengers-less.

Omega Men #2 (DC) I’m afraid this will probably be my last issue of the series, as I find myself lost and bewildered, and in a more frustrating than fun way. This issue sees Vril Dox and his recruited muscle—Superman, Green Lantern John Stewart, Cyborg and Wonder Girl—taking on the Omega Men in a slam bang fight, broken up by an interesting creation myth. Even when I thought I knew what was going on, writer Andersen Gabrych would throw in some tidbit that confused the hell out of me—hybrid Guardians? Ganthet’s a dad? What’s this panel with Kyle Rayner/Ion in it doing there?—and pulled me out of the story. Henry Flint’s art is totally top-notch though, and I really dug seeing not only his Omega Men, but also his renditions of more familiar DC heroes, particularly Superman and Wonder Girl. I do hope DC finds more work for him to do when this miniseries wraps up.

Scooby-Doo! #114 (DC) Sometimes, all it takes is a totally awesome cover to get you to plop down $2.50. I didn’t care for the last two-thirds of the book, as the other two artists aren’t as strong at stylized Hanna-Barbera impression as Robert Pope (who drew the eight-page lead story, “Turkey Terror at 2,000 Feet,” and contributed the cover).

Union Jack #3 (Marvel) U.J. is forced to beat the hell out of his mind-controlled comrades, Arabian Knight proves how hardcore dedicated he is to doing his job and Captain America literally phones in a guest appearance. Writer Christos Gage continues the action movie style plotting, and Mike Perkins continues to draw the hell out of everything. It’s a pretty fun miniseries, but I don’t think we’ll see it followed by a sequel or an ongoing anytime soon—four issues seem more than enough spotlight for Union Jack at this point.
Posted by Caleb at 8:15 PM

Mark Millar’s Civil War was an especially dramatic one and very interesting. click on the link anabolic steroids