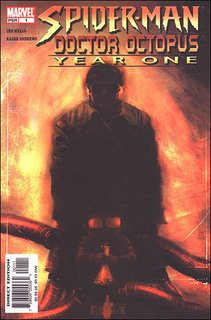 Why’d I Wait?: I remember picking the first issue of this miniseries up off the rack the week it was released, flipping through it, and standing there looking at it in my hand for long seconds, trying to decide whether or not to put it back on the shelf or add it to my weekly haul. I liked at least 95% of Wells’ previous output, some of it quite a bit. I loved Andrews’ art, and bought several issues of Incredible Hulk just for the cover art he provided for it (There’s a dream trade for you, a collection of Andrews’ various Marvel covers). But what I saw in the flip-through (all Otto Octavius, no Spider-Man) didn’t exactly win me over, and I figured I’d check it out in a few months in trade.

Why Now?: Those few months—and a few more—have passed, and it’s in trade. I actually forgot about my interest in the series altogether until I was at the library recently and saw it sitting there.

Well?: Well, it’s an exceptionally poorly named series. I understand giving Spidey top-billing, as he’s the hero and all, but he actually has very little to do with the story, only popping in during the closing chapters.

What I didn’t understand was the subtitle, “Year One.”

I guess I’ve always just assumed that phrase was something DC owned, if not in a legal sense, at least in a cultural sense, not unlike “Crisis” or “Imaginary Story” (Similarly, I’d be stunned to see a DC story with the words “What If?” in the title). Frank Miller’s Batman: Year One kicked off the formulation, being followed by a Year Two and Year Three, and just about every DC hero has had a Year One miniseries or story, it was even the theme for a round of lat -90s annuals, wherein every single DCU monthly had a “Year One” annual.

And the story doesn’t even adhere to that formulation anyway. This isn’t the first year in the relationship between the two title characters, it’s the first, I don’t know, 30 years of Octavius’ life, starting with him as a little boy and working gradually up to his first few battles with Spidey.

All that said, it’s a pretty great story. Wells follows Sam Raimi’s lead and plays Octavius as a sort of tragic figure, a brilliant scientist beset by unfortunate circumstances that eventually turn him into a sympathetic monster. Wells goes further though, in amping up the tragedy—abusive father, very weird relationship with his mother—and in drawing a parallels to Spider-Man.

Peter Parker and Otto Octavius aren’t just two guys who have alter egos named after eight-legged animals; they were both bespectacled little nerds with a yen for science who suffered the slings and arrows of their peers in school.

Wells further ties Octavius into the Marvel Universe as a whole, with his origin relying greatly on radiation, that Cold War weapon that also helped birth the Hulk and X-Men, and he searches for and finds some very nice symbolism in art history with the Da Vincini’s Vitruvian Man. Sure, it’s a character study in extremely broad, often theatrically grand strokes, but the melodrama all works as a sort of science fiction opera plot. If you read one Doctor Octopus story in your life, this is probably the one to read.

Andrews does not disappoint either. He can be somewhat chameleonic in his style, and here his work regularly calls to mind that of Sam Kieth and Tim Sale (particularly the bits dealing with Otto’s childhood, and a few panels of the grown Spidey in action).

He brings some of Well’s weirder scenes to quirky life, like the lover’s embrace/sexual harassment as seen through an X-Ray machine, and he even makes the sight of a fat guy in a tight suit with robot tentacles look pretty cool—not an easy task, to be sure.

Andrews draws some of the best Doc Ock tentacles I’ve ever seen, and the scenes of the villain in his cage, his tentacles unconsciously coiling and uncoiling like those of a real octopus in an aquarium, are simply beautiful.

Would I Travel Back In Time To Buy It Off The Rack?: Knowing what I now know, I might have gone ahead and taken that first issue home with me, but I’m glad I didn’t. At $2.99 a pop, this five-issue miniseries would run you about $15 if you bought it in single-issue installments. But the advertisement-free, easier to store and read trade collection only costs $13.99.
Posted by Caleb at 11:56 AM