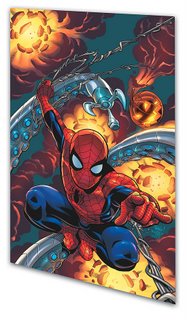 Spider-Man: The Other—Evolve or Die (Marvel Comics), by Various

This crossover story spanned all of the Spider-Man titles, and had several different creative teams, two of which I wasn’t terribly interested in (I do like JMS’s work on The Amazing Spider-Man—although I missed the Gwen/Goblin issues, so that might be why I still like it—but dropped it after John Romita Jr. left the series; Reginald Hudlin’s previous arc on Marvel Knights Spider-Man, meanwhile, was an interesting premise horribly executed). But what really repelled me was that one of the titles it would crossover into was a brand-new one, Friendly Neighborhood Spider-Man, which was to be written by Peter David and penciled by Mike Wieringo. I was very excited when that title was originally announced and eagerly awaited adding it to my monthly reading, but launching a new title with a number one issue that then continued into other titles just left a bad taste in my mouth, and I ended up passing on both the event and the FNS monthly.

Why Now?: Because now it’s available in a hefty trade paperback collection which can be borrowed from the library and read for free.

Well?: This overall story shares a lot of problems with the three Batman trades containing the epic “War Games” story, starting with a ridiculously long title, and then extending to different writers with different storytelling styles, art styles that don’t blend together at all and thus actively clash and mediocre editing that leads to character designs shifting between chapters. These problems seem endemic to these sorts of crossovers in general (and are emphasized when reading the stories in trade, rather than single issue installments), and neither Marvel nor DC seems interested in solving them, though it’s actually not that hard to do. In fact, I can think of two ways.

One is to get one single artist to draw the whole thing. The only real challenge is that you’d have to have the story mapped out far enough in advance that said artist would have the necessary lead time to get it all drawn. The second strategy is to make the story so damn good that no reader would ever dare wait read the trade, but would instead pick up each installment as they came out.

I remember this storyline proving pretty controversial among Spider-fans, in part because it played with and built on JMS’s mystical/magical origins for Spider-Man’s powers (Personally, I didn’t mind them at all, as JMS left them equivocal, and we were basically taking Elijah and Morlun’s word for how definitive that origin was over the more simple, traditional explanation that it was just radioactive spider venom). To be sure, things get very, very weird at the climax (I don’t even understand why the arm spikes appeared at all), but the story is filed with lots of little segments that work well on their own.

JMS has always excelled at handling Spider-Man’s relationship with his family, and I always enjoy seeing his Peter Parker play off his wife and aunt, particularly know that he’s “out and proud” with them, and they’ve all moved into Avengers Tower.

Peter David also provides from nice little scenes, like the horribly named new villain Tracer, and a guest-star packed chapter in which Spidey visits with the Marvel Universe’s most brilliant minds to seek a cure for his condition. Hell, even Hudlin, who writes the weakest points of the story, has his moments, like the Parkers’ use of a time machine, as Peter tries to make his last days with his family ones to remember.

Did I say last days? Yes, I did. As for the overarching story, during a battle in which he gets shot by the world’s slowest bullets, Spidey finds out he’s dying, just as Morlun comes back to eat his spider-powers. After seeking a cure and getting his affairs in order, Peter prepares to die, and Morlun makes sure it’s a very violent death. On his deathbed, Peter gets all spider-y, eats Morlun’s head, and then dies. Only to be reborn, better than ever!

There are some problems in the book that will make your head spin—in one issue, Mary Jane’s arm is broken, in the next, it’s completely fine—but the greatest problem with the story is the context in which it takes place. JMS, Hudlin and David have killed off Peter Parker and resurrected him with a new lease on life, new powers and a new understanding of his place in the universe. There are seeds for stories here that warrant more exploration, but they—and The Other in general—are made completely irrelevant by what followed.

As “Civil War” loomed, the focus switched to Spidey’s relationship with new father figure Tony “Iron Man” Stark, and then he was unmasked, the biggest Spider-Man development in 40 years, and switched sides in the war between Shellhead and Cap. If the Spider-office was going somewhere with The Other, as the certainly seemed to be, the “Civil War” event/story forced it to take a drastic detour.

Bonus nitpicking!: The cover of this trade collection features Spider-Man web-slinging at the reader, with a background formed of tiles of all the variant covers for the various second-printings of the original comics that make up the contents of the trade. The last few pages features all of these variants, including Spidey in his black suit, the Scarlet Spider and various other Spider-Man looks and identities through the years. In the background of each, there’s a pumpkin bomb and a Doc Ock tentacle. However, neither Doc Ock nor any pumpkin bomb-chucking villains appear in the story. Also, please note, that many of the variants have Spidey shooting webs from his wrists, as when he’s wearing his original costume, however, in some of those costumes, like the black costume, the webline should be coming from elsewhere.

Would I Travel Back in Time to Buy These Issues Off the Rack?: No. The story certainly has its moments, and there are plenty of funny bits and good old-fashioned super-hero soap opera drama, but it’s hardly a must-own story, even for the most hardcore Spider-Man fans.
Posted by Caleb at 12:41 PM