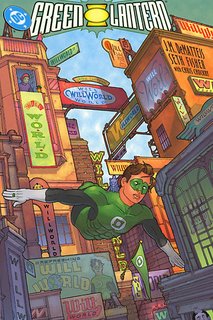 Why’d I Wait?: While J. M. DeMatteis’ many collaborations with Keith Giffen have resulted in some of the most fun mainstream comics of the past 20 years or so, DeMatteis’ solo work on DC superheroes is much more hit or miss. Too many misses—his ponderous Hal Jordan-as-Spectre series, the unreadable JLA/Spectre crossover—around the time of this original graphic novel’s release didn’t exactly inspire confidence. That coupled with my apathy for Hal Jordan as a character made this an easy purchase to avoid.

Why Now?: It was there. At the library. So I could read it without having to pay for it. Plus, after loving every panel of artist Seth Fisher’s recent Fantastic Four/Iron Man: Big In Japan, I was eager to see more work from Fisher.

Well?: We open in the desert, where a masked man in a cowboy get up is riding some kind of crazy alien steed. We know from the color of the mask that he’s Hal Jordan, but he doesn’t. He seems to have forgotten his name, as well as everything else about himself. So when he’s about to be attacked by angry aliens and a green wrecking ball swings from off-panel to knock his would-be foe flat on its back, Jordan doesn’t even know how he does it.

The entire 90-plus page adventure is structured as a mystery, as an amnesiac Jordan wanders through a crazy alien world, following hunches and impressions to rescue someone named “Mairwand,” though he’s not exactly sure why.

What exactly is going on is fairly easy to figure out—particularly if you’ve read the Brian K. Vaughan-helmed Green Lantern: Circle of Fire—the only way DeMatteis could have made it easier to suss out is if everything was colored green.

But it’s not a mystery story DeMatteis is interested in telling, so all that’s hardly important—instead, it’s a “Year One” era tale of how Hal Jordan mastered the most powerful weapon in the universe, and learned which parts of his psyche it takes to successfully wield a weapon powered by a combination of willpower, imagination and belief.

Jordan’s pre-Geoff Johns blank-slate personality actually works exceptionally well as an amnesiac hero, as Hal doesn’t need to show much personality, since he doesn’t know what his own personality is anyway. Sidekicks including an alien that looks like an artist Mu-Fon, a six-armed beauty named Kelly, a tiny angel dressed like a raver named Glance and a shape-changing steed called Trigger offer up the needed personalities (as well as the sorts of jokey dialogue DeMatteis’ DC fans might expect from him).

Some of these fall flat, of course, and the metaphysical mumbo jumbo can get a little tiresome now and again, but as a DC universe version of an Alice in Wonderland-type story, it’s quite charming. Particularly as it’s drawn by Fisher.

Fisher’s art style is not an easy one to describe; it seems influence by Asian art, but not in any predictable way. It’s hyper-detailed and highly three dimensional, calling to mind the work of Geoff Darrow, or a Frank Quitely with lots of time on his hands. Only brighter, looser and sillier.

He’s the perfect artist for this story, as he’s essentially called on to fill every panel with as much crazy shit as he can muster, and Seth Fisher can muster a lot of crazy shit. There are some sequences that are just brilliantly executed—the Escher like walk-and-talk scenes, the bit where Jordan’s body transforms into a giant head, the diving oath, the time spent wandering the desert—and Fisher excels at design (I particularly enjoyed the top knot-rocking samurai Egg Men) and detail (Note the brand on Trigger’s rump in the first panel).

While scores of artists have drawn Jordan and the other Lanterns over the decades, I don’t think anyone has come up with a Green Lantern ring that looked as good as Fisher’s unique version of it, one that seems like a piece of real jewelry, alien technology, a magic item and a weapon all at once, and even Fisher’s Central Battery ranks above all others.

While reading, I often found myself wondering how this story would read if it were silent. We’d miss out on the verbal gags, but it’s so well plotted and rendered that I think it would be just as clear without any words at all.

Would I Travel Back in Time to Buy it Off the Shelf?: Yeah, probably. While the story wasn’t one I could see myself reading over and over again—or lending to friends—I could definitely see myself pulling it off the shelf to flip through and look at the art every now and again (Or to point out the Egg Men to friends).
Posted by Caleb at 5:00 PM