Given that this panel is from a Kevin Smith-scripted comic... 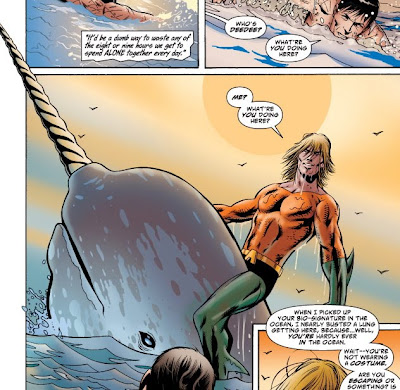 ...I suppose it passes for a subtle dick joke.

It's from Batman: The Widening Gyre, by Smith, Walt Flanagan and Art Thibert (although the artists' names read like fine print on the cover of the collection, compared to Smith's above-and-twice-the-size-of-the-title credit).

I haven't read the book yet, despite my interest in a Satanic superhero named Baphomet whose costume includes a goat head (Any advice from readers regarding whether this is a trade to buy vs. one to borrow from a library?), so I saw the panel in a little excerpt on DC's Source blog. The subject of the post, by Dan DiDio, was how Smith's original scripting of the scene called for a couple of dolphins attempting to have sex with Batman. If I'm reading DiDio's post right. Maybe the dolphins attempted to have sex with Batman in the previous scene, and they just had to edit out Batman and Aquaman's conversation about being humped by dolphins...?
Posted by Caleb at 9:00 AM

Batman: the Widening Gyre, aka the book where Batman reveals he peed himself during the climactic moment of Year One.

Its pretty dreadful stuff. Maybe worth a library read, but please don't pay money for it.

Library. By all that's holy, do not give money to this book.

Don't read it. Trust us.