From the solicitations released last Tuesday, it looks like Marvel will be having a pretty big March: There’s the new Civil War-scale event series Fear Itself, that goofy “.1” initiative we’ve previously discussed and a ton of Captain America comics.

Five of those Cap one-shots share similar title construction—Captain America And (A Captain America Supporting Character or Characters)—and I’m mildly interested in some of them based on either creators (Kathryn Immonen, Kieron Gillen and Kelly Sue Deconnick write three of them, Declan Shalvey draws another) or characters (The Falcon, Batroc), but there are just so many that it’s kind of intimidating and it feels easier to simply ignore them. They’re also $4 a pop, but are over-sized, so the extra buck gets you extra comics. 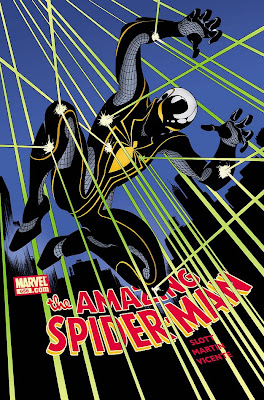 Gah! That’s one ugly Spider-Man costume, although I do like Marcos Martin’s picture of it. Maybe this particular armored costume was specifically designed to call attention to Martin’s skills? Like, they purposefully came up with some terribly designed costume just to see if his drawing could redeem it? 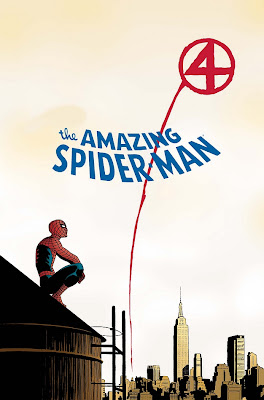 And here’s another nice Martin image. I’ve heard good things about Humberto Ramos’ work on the new iteration of Amazing Spider-Man, but I sorta wish it was a regular, old-fashioned monthly with Martin on art chores. I’d buy that regularly. I sometimes like Ramos’ work, but don’t think he and Martin really have terribly compatible styles, and thus the idea of them swapping story arcs back and forth doesn’t sound all that appealing to me. 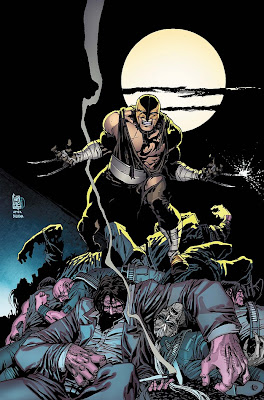 Hey, I thought Daken had a third claw that came out of his wrist or something...? Or am I thinking of X-23 or Romulus or some other Wolverine-like character? 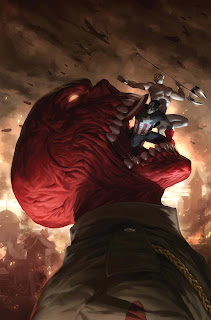 FEAR ITSELF: PROLOGUE
Written by ED BRUBAKER
Pencils by SCOT EATON
Cover by MARKO DJURDJEVIC
All the Red Skull's terrible secrets and plans are in the hands of his evil daughter, Sin, who's intent on outdoing her father... Now find out about the Skull's most-dangerous World War II mission, that he risked everything for...and how it's going to tear the Marvel Universe apart today. FEAR ITSELF starts here...in the darkest secrets of the past!
32 PGS./Rated T+ ...$3.99

Hmm. So this is apparently the kick-off to Marvel’s Next Big Thing, which seems to be following on the heels of their Last Big Thing, Siege, awfully closely. Is “The Heroic Age” over already? What was that, six months? A year? Is that how long an Age lasts these days?

I guess Matt Fraction and Stuart Immonen will be doing the seven-issue, $4-a-pop Fear Itself event series proper, which is mildy more exciting than the news would be that it’s yet another Brian Michael Bendis joint.

I did not care for “Avengers Disassembled” or Secret War much. House of M was pretty poorly done, Secret Invasion just all-around awful, and, by the time Siege started, I had completely lost all interest in reading Bendis-written event comics.

They’ve certainly all sold well for the publisher, but it’s something of a relief to see that they’re letting a different writer take a crack at the game, and it’s neither Bendis nor Civil War scribe Millar.

The specifics of the storyline seem a little vague at this point…I think the Marvel heroes vs. “The god of fear” came up at one point in one of the hyperviews. That didn’t really sound all that clever—isn’t Hercules and some other Marvel heroes currently fighting an evil god in something that’s just a mini-event miniseries?—but I suppose it’s all about the execution.

I’m sure I’ll read it in library-borrowed trade eventually, although I’m pretty far behind, having not even looked into borrowing a Siege trade yet. 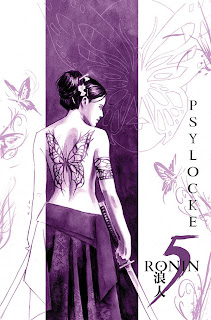 I think I'm going to go ahead and pre-order this one. I like weekly comics, and Peter Milligan is writing this one, so even if the script is one of his weaker ones, it should at least be interesting, right? 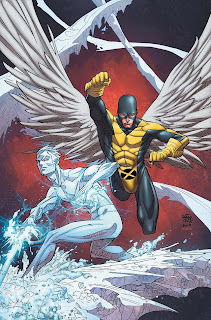 ICEMAN AND ANGEL #1
Written by BRIAN CLEVINGER
Art by JUAN DOE
Cover by ROGER CRUZ
Nothing ruins spring break faster for Iceman and Angel than a giant monster stomping through the streets of their city. But what are two young mutants to do when all the “real” superheroes are too busy to help? And why is GOOM, The Thing from Planet X running amok in the first place? It’s a superhero mutant monster spring-break bash! Woo!
32 PGS/Rated A...$2.99

I like Brian Clevinger. And I love Juan Doe’s artwork. Throw in Goom and Woo! is right.

What’s up with a Roger Cruz cover, though? His work is fine, of course, but when you have an artist with as unique and eye-catching a style as Doe, it seems odd not not advertise it on the cover. 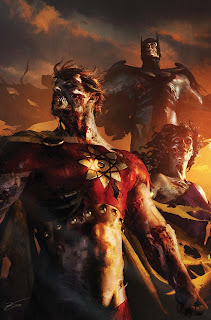 MARVEL ZOMBIES SUPREME #1 & #2 (of 5)
Written by Frank MarrafFino
Pencils by Fernando Blanco
Cover by Michael Komarck
A HUNGER SUPREME!
They were the Squadron Supreme, heroes exiled from another dimension to our own...but the twisted science of the Project Pegasus facility infected these defenders with a virulent zombie strain. Now it’s up to Jill Harper’s desperate special ops team to keep the plague contained within the facility—whatever the cost. But Harper discovers that the Squadron wasn’t the only unconscionable experiment being kept off the Pegasus records...and her shocking find may be the key to saving the human race. Join Frank Marrafino (Haunted Tank) and Fernando Blanco (MARVEL ZOMBIES 5, THUNDERBOLTS) as the bodies and unpredictable resurrections climax in the most gore-soaked chapter of the Marvel Zombies saga yet!
32 PGS./Parental Advisory ...$3.99

Oh, so this is where the Marvel Zombies concept is now? Squadron Supreme Zombies? Surely the bottom of the barrel is pretty much scraped clean at this point, right? (That said, I’d be down for a Star Comics Zombies…or did they already do that? I’m behind on Marvel Zombies series as well…). 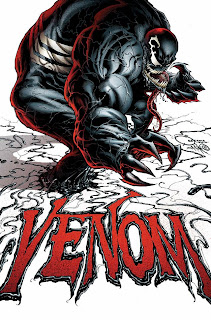 VENOM #1
Written by RICK REMENDER
Penciled by TONY MOORE
Cover by JOE QUESADA
Variant Cover by PAULO SIQUEIRA
Sketch Variant Cover by JOE QUESADA
America...meet your newest Hero!
The lethal alien symbiote known as Venom is in the custody of the U.S. military...and with a familiar face from Spider-Man’s world inside the suit, the government’s own personal Spidey is going into action as one of the nation’s top covert agents in hostile territory!
40 PGS./Rated T+ ...$3.99

Of course, that was a different guy wearing the Venom suit/symbiote in all those comics, and I imagine the co-star of the series will provide the actual hook for the series, but since Marvel’s not revealing who that is, it’s kind of hard to judge whether this is something someone might want to read or not (I’m going to guess Flash Thompson, who I understand was in the military and lost a leg or two in combat in a “Brand New Day” story, which would open up several possibilities, like a lifelong Spider-Man fan embracing the opportunity to wear a black Spider-Man suit—even a sentient, evil one—and soldier who lost his leg/s being able to walk again, so long as he’s wearing an evil alien costume).

I wonder why they’re being so coy about it? I can’t imagine there are that many familiar faces from Spider-Man’s world that are so popular or so unpopular that they would effect sales all that much. Unless it was someone really out of left field, like J. Jonah Jameson or Aunt May or Uncle Ben’s Skeleton or That Wrestler Peter Fought That One Time Before He Became A Superhero. 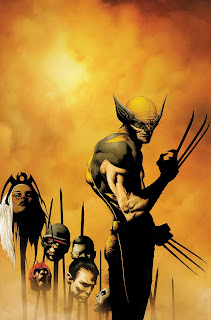 WOLVERINE #7
Written by JASON AARON
Penciled by DANIEL ACUÑA
Cover by JAE LEE
Captain America 70th Anniversary Variant Cover by DAVE JOHNSON
WOLVERINE VS. THE X-MEN CONTINUES! On the outside, an enraged Logan is fighting for his life against the combined might of both Namor and Magneto, while on the inside he's battling to stop a horde of demons from burning him out of his own mind. And now some of his closest friends, including Storm, Rogue and Kitty Pryde, look to stage the most improbable of rescue missions. Powerhouses JASON AARON and DANIEL ACUÑA tear it up as Wolverine’s battle against his literal demons rages on!
32 PGS./Parental Advisory ...$3.99

This sounds fairly awesome. Save for that “Acuna” part. 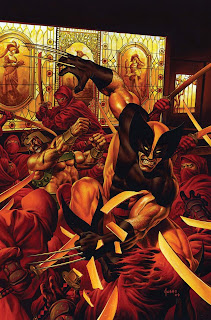 WOLVERINE/HERCULES: MYTHS, MONSTERS & MUTANTS #1 (of 4)
Written by FRANK TIERI
Penciled by JUAN ROMAN CANO SANTACRUZ
Cover by Joe Jusko
Gritty scribe Frank Tieri and artist Juan Santacruz bring two of Marvel’s toughest heroes together for an all new limited series, featuring covers by the legendary Joe Jusko! Matsuo—the man who killed Yuriko—is back from the dead and has one mission—kill Wolverine. But when he recruits two deadly foes of Hercules, the Olympian joins forces with Logan to show Matsuo just what it means to battle the best there is at what they do.
32 PGS./Parental Advisory ...$2.99

CAPTAIN AMERICA: HAIL HYDRA (1-5) is being released with a $2.99 cover price. And each issue has a different artist. Guest stars include Bucky, various Avengers line-ups, Nick Fury, Falcon, T'Challa, D-Man, Dr. Strange and others.

We're having a blast with that series.

If Venom turns out to be Crusher Hogan I would by every issue of that comic ever.

Since I'm with you that it's pretty well got to be Flash Thompson, I don't particularly care.