Some girls just don't appreciate traditional holiday icons. Like Lex Luthor. And that lady from G-Force.

I haven't put up a Christmas tree in about five years or, in fact, celebrated the holiday at all in the last three years, because my shoes have been too tight, my heart a few sizes few small and no terrible, cloaked, silent specters have visited me on Christmas Eve to take me into the future and show me my own grave stone.

Earlier this year I moved back to my hometown, however, and since this is the first year I'll live in the same city as my young nieces since...well, since ever, given how long I've lived in Columbus and how young they are...I decided I would deck my halls this year.

My own personal, traditional tree-decorating ceremony occurs on December 6, St. Nicholas Day, and involves setting up a fake-ass Christmas tree and my Playmobil nativity scene and advent calendar while sipping on Silk-brand soy nog and listening to a CD recording of Kazoo Christmas carols (in my youth, my family listened to a record of John Denver and The Muppets' A Christmas Together, although I'm not sure what happened to it over the decades; the kazoo album is the only Christmas album I have now).

I set up the tree and lights and waited for my nieces to arrive later to help put up the ornaments, because that's supposed to be the fun part, right? They asked a lot of questions, and I was somewhat taken aback by their lack of familiarity with many of the pop culture figures that populate my imagination.

For example, when we went to YouTube to find some Christmas carols and I searched for "Muppets" and "Christmas" in an attempt to find John Denver's "Twelve Days of Christmas", I found this clip of Animal, The Swedish Chef and Beaker singing something, and Niece #1 (age 7) asked "Who are these guys...? Do they have something to do with Elmo...?"

Who are The Muppets?! 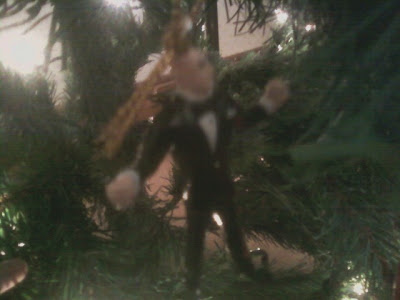 "Daddy Warbucks?" I asked back, incredulous. "That's Lex Luthor!" Jeez—it's not like all bald people look alike, is it?

To be fair to my sister's bald comics character identifying skills, I have no idea why whoever designed the Lex Luthor Christmas ornament—part of a set including Superman, Batman, a Flash (he's got Wally's eyes but Barry's belt) and Robin Tim Drake, in his original Robin costume—put Lex in a tuxedo instead of business suit or one of his villainous outfits. 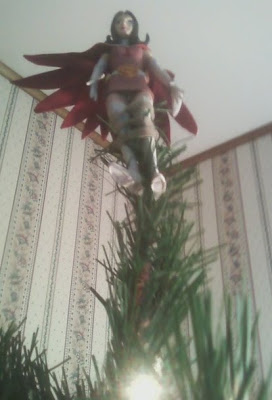 "Who's that supposed to be?"

"Sure she is. She has wings like an angel. And she's as pretty as an angel."

"She's still not an angel."

Both girls and their mother were familiar with my roommate, Cuddle Pillow Batman. But the little ones showed him an alarming lack of respect, treating him as Beat-Up Pillow Batman.

"I don't like this man!" Niece #1 cried, grabbing him off the couch, yanking off his festive Santa hat and throwing him to the ground, where she and Niece #2 kicked him around and, after I rescued the Comfy Crusader from their relentless roughhousing a couple of times, they carried him off and threw him down the basement stairs.

What was with all this violence toward the Pillow Knight Detective? Apparently, Batman stinks and is creepy and the fact that I like him and (in his Cuddle Pillow body) is throw-on-the-ground-able and kick-able without also being breakable, makes him an object of repeated assault.

Man, kids today...don't know who The Swedish Chef is, don't appreciate late-seventies bowdlerized English translations of anime series, and don't have any respect for Batman...what is the world coming to...?

Anyway, Cuddle Pillow Batman and I both wish you and the geek culturally ignorant children in your life a happy holiday season: 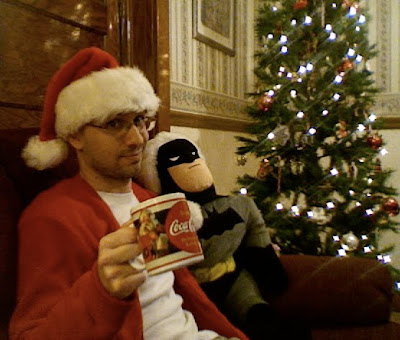 I tried to get our other roommate to pose for a Christmas picture with us, but she refused to wear her Santa hat, choosing instead to knock it off her head with a swipe of her paw and set about eating it: 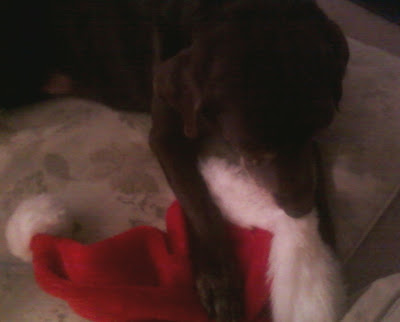 They don't know who the Swedish Chef is?

Lovely post! Have a brilliant Christmas, and my best to your urban avenger upholstery.