Seen in a grade-school gymnasium: 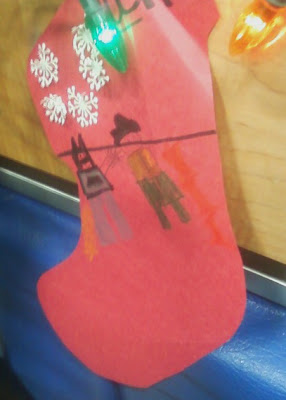 I'm not sure who the figure on the right is supposed to be—Woody from Toy Story, maybe? A matador?—but that's definitely our friend Batman on the left of this Christmas stocking. Right where he belongs. The gym was full of these red construction paper stockings, each one having the child's name along the top and decorated with drawings or pictures cut out from magazines or old greeting cards and pasted on to them. That was the only superhero-related one I found, although there was a pretty bad-ass one with a photo of a cat's head covered in crayon-drawn blood.

The reason I was in a grade-school gymnasium was to watch my nieces sing a couple of Christmas carols. As you may recall from an earlier post, they are violently opposed to Batman. I teased Niece #1 about the fact that she would probably grow up to marry Batman and become Mrs. Batman because she loves him so much, and teased out what she doesn't like about him. First, he's scary-looking (Seven-year-old girls are a superstitious and cowardly lot) and, second, he cooks and eats bats. That's why they call him Batman.
Posted by Caleb at 5:46 PM

Labels: batman, phoning it in

You should rope your neice into some sort of Axe Cop thing, and watch the money roll in.