Aquaman #3 (DC Comics) Geoff Johns has started dropping more hints about Aquaman's new origins and future storylines, continuing to stage flashbacks (which get drawn with soft, feminine product commercial lighting), introducing a former colleague of Aquaman's late father, and a portentous line of dialogue regarding Aquaman's trident. Around these hints the story of Aquaman and Mera slaughtering the flesh-eating fish-people from beneath the ocean floor continues, as does Aquaman's struggle to earn the respect of surface-worlders, whose main experience with the superhero and Justice Leaguer seems to have been repeats of Super Friends broadcast into the DCU from Earth-Prime.

Portraying Aquaman and Mera as unlikeable assholes isn't a strategy I would have expected, but I have to admit it's kind of funny, and I'm enjoying the silliness of it. Here they are when a man whose help they are seeking opens the door to them: 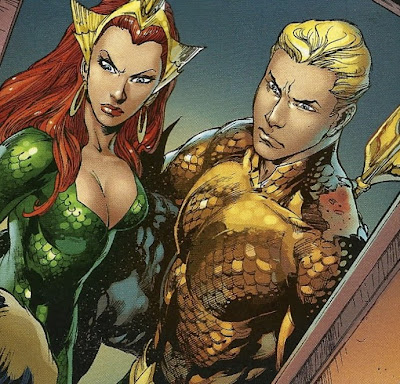 (The man apparently attempted to kill Aquaman at some point in the past, but yeesh; Aquaman's apparently trying to out-Namor Namor, and Mera's out-Naomring Aquaman's out-Namoring attempts!)

As someone who both noticed and was disappointed that the superheros are taking fewer prisoners than the demon armies of the dark god of evil in the new, "New 52" DCU, I was happy to see the issue at least ends with Aquaman debating whether he has a right to wipe out The Trench creatures. Mera, on the other hand, suggests genocide.


Captain America & Bucky #624 (Marvel Entertainment) It's the end of an era, as the final work of on this title from co-writer Mark Andreyko and artist Chris Samnee sees print; co-writer Ed Brubaker will be joined by new co-writer James Asmus and new artist Francesco Francavilla for next month's issue. And what a short era it was, too: despite the high number on the cover, this is actually only the fourth issue of Captain America & Bucky, as it inherited Captain America's numbering in one of those weird number schemes Marvel seems to delight in.

Samnee's presence was the main motivating factor for me in giving this book a try, and this issue offers another great example of why. The story is more or less a review of what long-time Cap readers probably remember from a few years back in Brubaker's run, when Bucky's survival to the modern day as a brainwashed Soviet super-soldier code-named Winter Soldier was revealed.

Samnee's solid, stunning, sexy and, um (what's another s-word...?) sophisticated art work renders any concerns about having been-here or read-this before superfluous. If some of the contents are familiar, or at least not new information, they at least look better (and more comic-booky) than they ever have before. 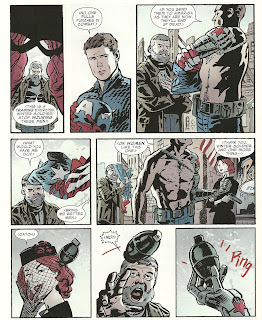 The writers do provide a call-back to their first issue, so that the four issues of their run do form a decent, self-sufficient story of Bucky telling his life's story to a loved one, but it's ultimately how good that story looks and how well it reads visually that makes it worth reading.

Normally I would bail at this point, although Marvel's chosen another rather talented artist to take over for Samnee, so I think I'll stick around at least another issue to see what Francavilla will do with Bucky. I'm curious about where this title is going, though. Despite the title, the guy who gets top-billing doesn't appear at all in this issue, and if Captain America has his own book, and modern-day Bucky is going to be starring in the upcoming Winter Soldier monthly and C&B is jumping from the past setting into the present Marvel Universe, what's the point of the book, exactly...?
Posted by Caleb at 12:44 PM