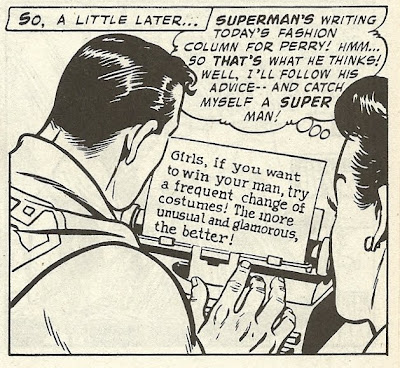 Here's the great thing about Superman. The suits at Warner Brothers can fight his creators families in court for years and refuse to settle honorably just to be dicks. DC can publish comics where he sheds a tear at the funeral for the wife of the Elongated Man who was raped on the Justice League table by Dr. Light and then blowtorched to death by The Atom's ex-wife because just because. They can publish a year of comics where all he does is walk around being poorly drawn and acting like a huge douchebag to everyone he meets. They can take away his trunks, make him wear blue armor instead of blue spandex and have him fight badguys like his rocket ship crash-landed in a no-holds-barred mixed martial arts fighting circuit instead of a Kansas farm.

But no matter what they do, none of that will ever change the fact that, this one time, DC Comics published a story where the Daily Planet fashion editor called in sick and left her finished column in a locked filing cabinet, so Editor-in-Chief Perry White asks Superman to sit down at a typewriter and, using his X-Ray vision to see inside the filing cabinet and read the column, transcribe it, and Lois Lane walked in and thought that Superman was actually writing a fashion column for The Daily Planet and thought by following this fashion advice she'd be able to succeed in finally getting him to go steady with her.

Who's not sick of talking about cranky old Frank Miller and the Occupy movement yet? I mean, besides me? You? Okay, read on then.

I thought this letter from Kim Thompson to Tom "The Comics Reporter" Spurgeon was pretty funny. I particularly like it whenever someone uses Darth Vader as a unit of measurement when discussing one's politics.

I was gonna write something in response to Mark Millar's defense of Miller, which seemed to misread what Miller said originally and what fans and commenters were saying about it as fundamentally and as thoroughly as Miller misread the Occupy movement and the police reaction to it, but then Laura Hudson wrote exactly what I would want to say to Millar, only more efficiently and elegantly than I would have been able to manage. Plus, no swear words!

Richard Pace's massively linked-to strip "The Dick Knight" is formally great, even if it didn't exactly split my side. He did a hell of a job reproducing Miller's Dark Knight style though, and I really admire creators who are able to wrangle form like that.

Chris Sims' piece for Comics Alliance did threaten my sides, however. He and Pace (and others) zeroed in on the very same, very famous Batman Vs. The Rich and Corrupt moment.

And, finally, whatever one particular old Batman writer may think of the Occupy movement, they're apparently using Batman technology to get their message out. Go Occupiers!

And on the subject of Occupy, I've seen so much disgusting footage of police brutality and/or police enthusiasm that I'm beginning to feel queasy and scared every time I see a policeman now. I wonder if 2011 is going to end up completely eroding the heroic auras they and other first responders took on after 9/11...?

If you'd like to feel sick and/or depressed yourself, I'd recommend this Wonkette piece, in which Ken Layne notes the Egyptian cops during the uprising were gentler with the mobs that completely overthrew their government than so many United States city cops have been with freaking protesters organizing old-school sit-ins targeting nationally loathed financial entities. There's also an inspired juxtaposition of a quote from President Obama regarding the Egyptian protests juxtaposed with an image of a quartet of burly police officers in riot equipment subduing and cuffing an occupier.

How successful was DC Comics at getting their "New 52" reboot into public consciousness? Successful enough that Ward Sutton used it as a springboard for this very funny politicos-as-DC superheroes piece in The Village Voice.

His drawings of the heads of Rick Santorum and Michelle Bachman on the fit young bodies of Robin and Batgirl are probably going to give me nightmares for a while, but I liked how the majority of the heroes—characters?—had normal, chubby, Silver Age bodies, and several were dripping beads of flop sweat.

This Zack Smith interview with John Hodgman, The Funniest Man Alive*, that ran on Newsarama was a great surprise. It's not the greatest interview—through no fault of Smith's, I should note, but rather as a function of the nature of the piece—as it essentially is just Smith getting out of Hodgman's way and letting him talk.

That talk revolves around comics, particularly DC's "New 52" (Men of War gets a celebrity endorsement!), and Hodgman seems to not be "on," but simply being his real self, which is...well, frankly, it's a little disorienting, like hearing Stephen Colbert being interviewed as Stephen Colbert rather than as his character Stephen Colbert (as I once did on NPR's Fresh Air and, I think, on Meet The Press when Tim Russert was still alive. So weird!)

Anyway, Hodgman's a smart, witty guy and Smith gets him talking comics and sharing, so it's well worth a read if you like Hodgman, comics or, like me, Hodgman and comics.

Did you know that in the Justice Society of America feature film that exists only in my head, John Hodgman plays Wesley "The Sandman" Dodds? It's true! The Justice Society film that only exists in my head will never actually exist outside of my head, though. I know this because it's directed by Guy Maddin. And is black-and-white. And not 3D. That's too many impossible things to imagine in a feature film.

This was really great to see. And it's really great to see a modern comics creator so openly acknowledging the debt he owes an earlier creator, from whose work the younger writer has benefited enormously from. (It also reminds me I have to review Vision Machine for you guys yet...)

This is a really great interview with Mark Waid, conducted by Tucker Stone. Lots of interesting comics-related stuff gets covered, but the main subject is Waid's stellar run on Daredevil, with two of the greatest artist working in super-comics at the moment alternating arcs

I would heartily second that anyone who likes superhero comics check out an issue of Daredevil, and the idea that a whole lot of people don't seem to have realized just how special Martin is just yet.

I was a little bummed to hear that the art team will be going through some changes soon, however, and I wasn't reassured by Waid's statement that he trusts editor Steve Wacker's taste when it comes to teaming him with new artists (Wacker also edits Avenging Spider-Man, which will follow its first arc drawn by Joe Madureira with one drawn by Greg Land, The Worst Comic Book Artist In The World).

While there's a lot of good stuff in the interview, I think this was my favorite part (Stone in bold, Waid in, um, not-bold):

The thing about Daredevil is that it reads like proof. It's proof that you can take somebody who can write a good story and you put them together with somebody who can draw really well and you get some decent, non-over-the-top coloring on the book, then you're probably going to end up with a comic book that people want to buy that makes them happy. It's that easy, you know? It's not "easy", but it's that simple.

It is that easy. What we do is not the easiest work in the world, but it's not that brilliant a revelation. Everything you said is absolutely true, but you would think--the way the market behaves, the way the publisher behaves--that you were speaking in tongues when you said what you just said.

I don't know who this lady is exactly, but I think I'm madly in love with her.

Here's Brian Hibbs' latest Tilting column about retail at Comic Book Resources. It's a potpourri column, but the subject I was specifically linking to it here regarding was his assertion that he thinks the under-performing "New 52" books will end up being canceled really quickly because "the integrity of the magic number '52' is much less important than not having anchors that drag you down."

That's the exact opposite of what my thinking has been, as I assumed because DC promoted the books a line with a specific, set number of books, admitting the failure of any one book would be tantamount to admitting failure of the initiative.

Hibbs follows that up with a great point though. Given the amount of press and promotion DC put into the line, there' s zero argument to be made that the underperforming books just haven't had a chance to succeed yet. Essentially, no DC book is ever going to get a bigger chance to succeed than those 52 books did, and if all of that couldn't get a, say, Green Arrow book over, then continuing to publish it for 12 more months in the hopes an audience will find it won't help any.

I haven't been watching Batman: The Brave and The Bold this past season (I'll catch up on DVD someday), but I hear he teamed-up with Ambush Bug in the season finale. I was curious, did the other hero in this comic ever make an appearance...?

This Cracked article of "The 7 Stupidest Attempts to Reinvent Batman" (via Comics Reporter) is a lot of fun to read, and pretty funny as well, but I should point out that, while focusing on the insanity of many of the plots, the writers fail to note that most of these have incredibly awesome artwork from the likes of Norm Breyfogle, Kelley Jones, Bo Hampton, Dick Giordano and Alcatena.

I've read all but three of the stories covered—Batman: Hollywood Knight, Batman: Holy Terror and Countdown To Adventure, a spin-off to a series nobody on Earth liked—and the four I read were all between pretty good to totally awesome in quality (Although, granted, the ones with weaker, sillier plots tended to have amazing art to make up for it.

(Above: Batman as a ghost vampire made out of blood, as drawn by Kelley Jones, the number one artist for drawing things like that)

*I'm awarding Hodgman this title based solely on the number of times his 2006 book The Areas of My Expertise caused me to laugh out loud. It was a higher number than the times pretty much any other individual still alive has been able to get me to laugh out loud.
Posted by Caleb at 5:40 PM