Writer Sholly Fisch has The Phantom Stranger use his god-like superpowers to unite every Robin ever from throughout Batman’s past, present and future in order to figure out a way to save him in this story, wryly entitled “Batman Dies at Dawn.”

As always, it’s a tightly-written done-in-one story, and one that seems particularly geared toward adult fans who will get all the references and enjoy the trivia. For such a short space, Fisch gets in a lot of character work, with each Robin having a defined personality trait, even if it’s only one apiece (Jason’s hot-headed, Damian’s an arrogant brat, Carrie talks funny, etc.)

As I may have mentiond about 12 other times before, aside from Fisch’s scripting, the chief pleasure I take in this series is seeing artists Rick Burchett and Dan Davis synthesize characters created and designed by artists with vastly different styles from throughout comics history into the same setting, so that we’re not only seeing how Burchett might draw something, or how Burchett draws in the style of the cartoon this series takes its name and premise from, but how Burchett might draw a Jack Kirby or C.C. Beck or Mac Raboy or Dick Sprang style character in his style in the style of the show. 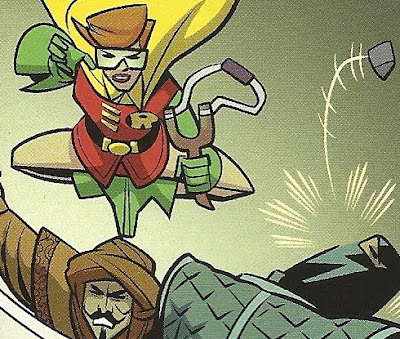 and a Tim Drake who looks like a fusion of the Dick and Tim Robins from Batman: The Animated Series and a Stephanie Brown Robin with the huge bushy blond hair that Damion Scott gave her.

This one’s got a little something for everyone, no matter who your favorite Robin is, although I imagine Stephanie Brown fans will end up being the most delighted, as they get to see her in two different incarnations: 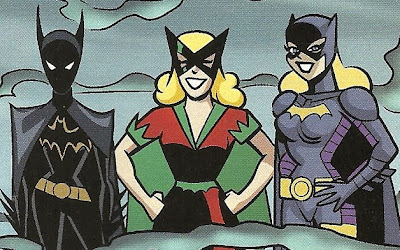 Green Lantern #3 (DC) Hooray for Geoff Johns! For the first time since DC lowered their page counts from 22-pages to 20 he’s finally started pacing his scripts for the new format, with the title splash here occupying only half of a single page, rather than a two-page sspread, as in the last few Johns-scrpited comics I’ve read. In fact, there are no double-page splashes, and no single-page splashes in this issue at all!

The issue read a bit more densely and thus more rewarding, and with so many pages with only two to four panels on them, it’s not like pencil artist Doug Mahnke isn’t getting room to show his skills or anything. There are at least two very big moments and surprises in here, too, and I think devoting more space to content instead of simply big images of big moments goes a long way toward making them seem not simply exciting, but satisfyingly so.

Also there’s a scene set on the conqured alien planet of Korugar, where the slavers stops a young female captive, and I got a sinking feeling, remembering that scene early in Brightest Day where the pirate licks his lips at the prospect of raping a little girl before Aquaman and Mera arrive to save the day. 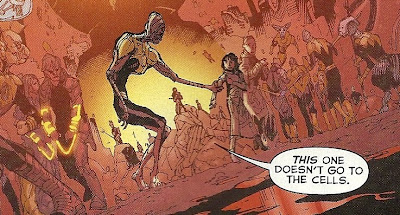 And then you turn the page and learn the bad guy doesn’t want to rape the little girl, he only wants to eat her. Whew! So hooray again for Geoff Johns, for not doing something I hate that he’s done in the past!

The artwork remains fairly phenomenal—I loved the two-panel sequence on the top of page seven that ends with Sinestro laughing at Hal Jordan—although I notices it’s back to being provided by Mahnke and a small army of inkers (Four this issue, so about five pages a piece).

The one thing this issue that struck me was pretty weird was a scene where Hal confronts a member of the Sinestro Corps: 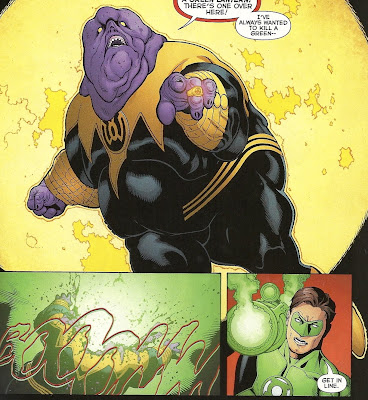 I know that some time in the past few years the Green Lantern Corps changed the rules of their rings, allowing the GLs to use lethal force and kill with their rings, but Hal Jordan killing an enemy, that’s new, right? I mean, there weas a whole story arc not too long ago, written by Geoff Johns, in which Hal wresteled with the idea of Sinestro getting the death penalty, but here he just blows a guy’s head off.

I wonder if this is part of the “New 52” continuity reboot—a more ruthless Hal Jordan with no qualms about killing, and, perhaps, a more deadly force friendly superhero community in general (Hal’s Justice League pals Superman and Batman, for example, wouldn’t be cool with Hal bazooka-ing a bad guy’s head off). Like so much of the new DCU, I guess that’s something we’ll have to wait and see on.
Posted by Caleb at 7:59 AM

That Batman: The Brave and The Bold issue is both a genius idea and the comic I always dreamed of!
So much fun!!

Why did they stop the cartoon series, already?

I'm pretty certain the cartoon is still ongoing. At least the most recent one with 'Mazin Man in it seemed new to me...

So...many...Robins! It was wonderful. And so was Green Lantern! That scene with Sinestro laughing, was classic.

@LurkerWithout - It's still airing new episodes, but it's been announced that this is the last season. There's only a couple more episodes left to air.

I also was perturbed by Hal just up and icing a dude. Seems a little cold and a little "trying to be dark and edgy"