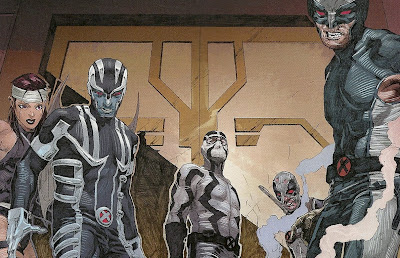 This is another Marvel series that I fully intended to buy the trade collection of once it became available/I got around to it, but then I saw the trade sitting there on the shelf at the library and decided “Hey, why wait and pay, when I can read it tonight for free?”

The latest Marvel use of the name “X-Force” was applied to Cyclops’ Wolverine-lead wetwork/assassination/black-ops squad, which, from a safe distance, doesn’t really seem like the sort of thing Cyclops would create, but as I’ve been catching up on Astonishing X-Men, it’s become clear Marvel’s been gradually pushing Cyke into the dark, troubled, ends-justify-the-means role of a leader whose entire race is on the brink of extinction.

I thought the initial line-up was pretty amusing: It was basically all the stabbiest X-Men who had knives. 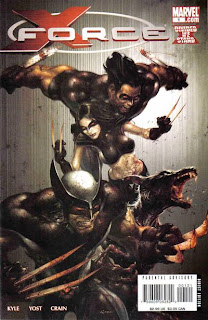 But my interest wasn’t really piqued until Marvel announced they would be ending that short run of X-Force comics with issue #28, only to relaunch it with a new number one in a series that would add the popular mutant adjective “Uncanny” to the title.

This line-up included characters I knew and/or liked, like Wolverine, Deadpool and Fantomex (the French mutant super-thief from Grant Morrison’s New X-Men) and Angel/Archangel. Plus Psylocke. (The psychic ninja lady who sometimes looks Asian and sometimes doesn’t, and sometimes has purple hair and sometimes doesn’t. But who never, ever, ever seems to wear any pants at all).

I liked the fact that they would all be wearing matching gray and black versions of their own costumes even better. There’s something about small alterations to familiar costumes that I find exciting, something I can’t really explain (although I assume it has something to do with the admixture of the comfortable familiar with the exciting newness). That’s one of the things I really enjoyed about Geoff Johns’ black and white Lanterns in Blackest Night and Brightest Day.

Having read the first story arc and some of the filler material that comprises Uncanny X-Force Vol. 1: The Apocalypse Solution by Rick Remender, Jerome Opena and company, I see that the line-up works extremely well for the purposes of the book.

Old-school X-characters Angel (one of the oldest half dozen or so) and Psylocke provide the book a melodramatic center, where emotional conflicts can blossom and excuses can be provided so that the stories can potentially be “about something,” while Wolverine, Fantomex and Deadpool serve as foils. The three are similarly straightforward in their characterization, their mysteriousness, their bad-assedness and not-really-X-Men-material natures, but they all have pretty distinct personality traits and foibles and super-character markers, and are thus all different enough from one another that they’re fun to watch bounce off one another and off the straightmutants.

The premise of this X-Force series remains the same as the previous one, and both seem like they could very easily succumb to a sense of having too many Wolverines in the kitchen. But because Remender has chosen such flamboyantly distinct characters as the other Wolverines here, that is most assuredly not the case. (At least in Uncanny X-Force; I don't know how adjectiveless X-Force worked out, but just looking at the covers I can see that they did have a literal clone of Wolverine in the lineup).

The book gets off to a very, very rocky start, so rocky in fact that I had to flip ahead to make sure the whole thing didn’t look like the opening. That’s a seven-page sequence from some Wolverine: Road To Hell comic book that Marvel apparently published to hype their emergent Wolverine line about the time writer Jason Aaron launched a new Wolverine series with his “Wolverine Goes To Hell” storyline.

This story-like tidbit is written by Remender, but, in the context of what follows, it like reads like two scenes he might have cut out of story arc “The Apocalypse Solution” between the first and second drafts. In it, Fantomex gives Wolverine a ride in this UFO (That’s another thing I like about Fantomex; he has his own UFO) while they talk and drink PBR. Then they meet up with the rest of the cast, explaining the purpose of the team in the process.

And that’s it. The story starts over on the next page with the first issue of Uncanny X-Force. While there’s nothing really to the segment, it’s the art that is most offensive. It’s by Leonardo Manco and, to put it nicely, it’s not done in a style I enjoy.

To put it less nicely…well, let’s just stick with nicely. Suffice it to say it is heavily photo-referenced to the point that all of the lines, which are actually dots, seem applied on top of photos, with little to nothing actually looking like it was drawn.

Opena’s art throughout the rest of the book is a definite improvement, with everything looking drawn, and looking excitingly, dramatically drawn. In addition to handling the figures in motion and faces expressing emotion well, Opena’s layouts and the angles he chooses help give the scenes—even the quiter, more mundane ones—a sense of motion and urgency.

The story is fairly simple. The new X-Force team has a lead on Apocalypse, one of the X-Men’s greatest enemies, and the sort of threat that endangers the whole world. Angel has history with him, as Apocalypse once possessed him or mind-controlled him or whatever and turned him into one of his Horsemen, which meant he got blue skin and wings made out of knives for a while. That must be a pretty important X-Men storyline, because they adapted it into that awesome/terrible X-Men cartoon from the '90s.

Angel/Archangel (he can switch back and forth at will now, apparently) has a plan to deal with Apocalypse: X-Force are going to hunt him down and kill him immediately, before Cyclops and the rest of the X-Men get involved.

The hunt occurs fairly quickly, and the majority of the action is devoted to introducing four new horsemen of the apocalypse, colorful characters with bizarre mutant abilities plucked from throughout history, and having X-Force fight and then dispatch them. As for Apocalpyse, he’s not yet the big gorilla with pile-driver arms and a huge A belt buckle yet. He’s been somehow recincarnated as a little boy in a private elementary school uniform, whose main interests include toys and comics, although his followers/worshipers are intent on educating him so that he grows up to be the supervillian they want him to be one day.

So the seemingly amoral heroes of X-Force are faced with a moral dilemma, the X-Men equivalent of whether or not you’d kill Hitler as a baby if given the opportunity.

The book climaxes with the varying ways the heroes decide that question for themselves, (presumably) leaving the fallout to the next volume. Remender’s plotting and characterization was quite engaging throughout, and I do like the fact that his storyline pivoted on confronting his team of hardcore heroes with the choice to perform the very hardcore act that they tell themselves and each other they are committed to doing, in this case the act being such an extreme one that committing it actually seems beyond most of them.

The collection also includes a back-of-the-book gallery all of the many, many covers for the first four issues, including work from such disparate artists as Marko Djurdjevic, J. Scott Campbell, Rob Liefeld and Clayton Crain, a few pages of process stuff showing the evolution of a single page from script to final colors, and an exhaustingly complicated six-page prose summary of the 28-issue, 2008-2010 run of X-Force that preceded the launch of X-Force. I was actually glad they included this, as I liked this volume well enough to read another like it and, knowing it would be a few months before Uncanny X-Force Vol. 2 came out, I was sort of tempted to look for trades of the X-Force series that preceded this one. Skimming this history of X-Force, however, was more than enough to convince me not to even make the attempt: It apparently tied in very closely to all the X-Men meta-story business involving Cable and timetravel and mutant Messiah Hope and Mister Sinister and the space cat-lady that used to date Cyclops' dad in outer space or something and Greg Land art. (It looks like Wolverine had a snappy red and blue costume on for at least one panel of the run though...?).

But as for The Apocalypse Solution? I liked it an awful lot, and given my resistance to all things X-Men, I have to assume that means it's really, really good. I'll read the next collection of Remender and Opena's run on this series, when it comes out. Maybe I'll even buy it, if I don't run across it in a library before I run across it in a comic shop...

By the way, what are the comics that the child who will grow up to be Apcalypse reads when he's not playing with his toys? 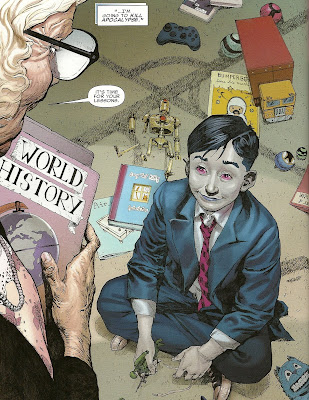 There are still two occurrences of "Fantomas" instead of Fantomex.

Re Apocalypse: I'd thought he was connected with alternate futures; a look at the Marvel Universe entry on him showed that he was heavily involved with time travelers and alternate futures. To the extent that the new version of him holds up logically, there are no moral issues in killing him: it's comparable to killing an antichrist before he can take action.

But I also saw that Cable and Hope both grew up in alternate futures, and I'm ready to say, "To hell with them." Soap opera rapid aging does nothing more than provide new love interests for material that's already junky; having someone grow to adulthood in an alternate future so that he can take dramatic actions is a copout and nothing more. The overuse of alternate futures in the X-verse is reason enough to damn the whole fictional 'verse.

"There’s something about small alterations to familiar costumes that I find exciting, something I can’t really explain (although I assume it has something to do with the admixture of the comfortable familiar with the exciting newness)."

There is a term for this feeling, you know--the uncanny. ;)

You should back track a bit to the Kyle/Yost X-Force. The first arc is a bit shaky but then they have a downtime issue and it's GREAT. And it doesn't let up from there. It's not quite as quirky, but it's still really good character-wise.

With Remender's, what amazes me is how he ties together really forward thinking ideas and concepts and backwards-looking continuity.