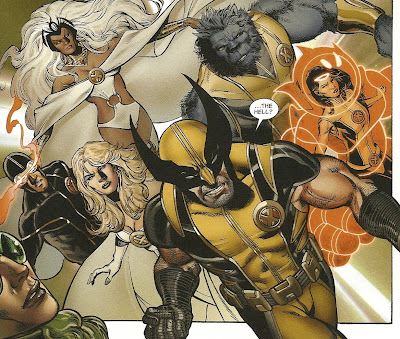 After Grant Morrison, Frank Quitely and a passel of talented artists reinvented Marvel’s moribund and morbidly obese X-Men franchise into something new and cool and fresh for the 21st century in 2001-2004's New X-Men, Marvel characteristically decided to order a full retreat from the new.

So the title "New X-Men" was repurposed for a book showcasing the youngest, newest teenage mutants (since New New Mutants just sounds silly), and the flagship book became the newly launched Astonishing X-Men. In the first issue of the new series, leader Cyclops formally announced to character and readers alike the game plan—The X-Men were going back to being superheroes.

To help keep complaints to a minimum, Marvel turned to fan-turned-Hollywood script-writer-turned-television superstar-turned-nerd celebrity-turned-budding comic book writer Joss Whedon (that was, in industry parlance, a major “get”) and Planetary artist John Cassaday.

The book was pretty good when it came out, but it never came out. I read and liked the first two story arcs, and then quit paying attention during one of the many-months stretches between issues.

To follow the Whedon/Cassaday team’s 24–issue run, Marvel tried hard to assemble another creative team who would keep the book off the shelves for long stretches of time, writer Warren Ellis (an ideal X-Men comics writer, and probably the writer Marvel should have tapped to follow Morrison, had they truly wanted to follow Morrison instead of pull a 180 of course correction) and Simone Bianchi, an extremely gifted designer and cover artist who was slow enough to match Cassaday’s pace.

I didn’t read their story arc—collected as Vol. 5: Ghost Box—either, as by that point I had sort of forgotten about the X-Men again, and all I had ever heard about that story was how evil Marvel was being in their pricing of it (Rather than charging $4 for 22 or 20 pages of story, I think there was an issue of “Ghost Boxes” with less than 20 pages, and a bunch of sketches or whatever to fill up the back...? Am I remembering correctly...?).

And what followed that?

Well, like I said, I had pretty much tuned the title and the characters out, and hadn’t given it a thought until Marvel started releasing images like these to promote the miniseries spin-off that Kaare Andrews would be illustrating: 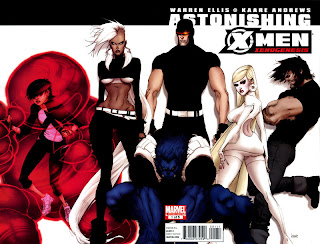 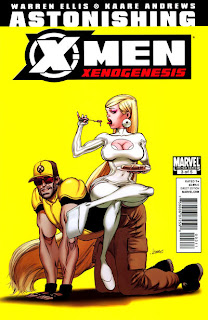 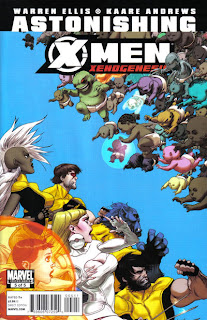 (These are among some of the best Marvel covers of the last 10 years, by the way).

And then the other day in the library I saw this, and realized what I had missed: 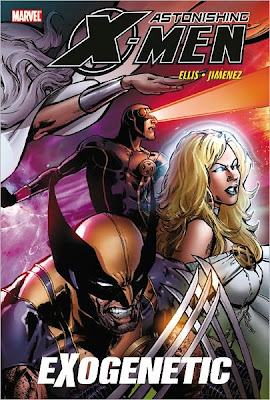 Apparently they followed Bianchi up with Phil Jimenez, one of my own personal favorite artists (and, it’s worth noting, an artist who drew chunks of Morrison’s New X-Men run, and whose style meshed incredibly well with the then-mandate for a more realistic science fiction take on the concept).

Naturally, I brought it home from the library with me, read it, re-read it, and then decided to blog about it. Which brings us all up to speed, right?

This volume includes the story arc “Exogenetic,” which reads just like a lot of Ellis’ comics scripts do—like surprisingly finished storyboards for a blockbuster action movie. That is either a virtue or an extreme irritant, depending on how you encounter the story.

Read all at once in a single sitting, it’s a virtue, and the comic seems fast-paced, action packed, and built around set-pieces and one-liners, with just enough clever character work, funny jokes and a few interesting moral and/or scientific ideas that you feel smarter having experienced it, rather than dumber (as in the case of experiencing an actual Hollywood blockbuster action movie).

Read 20-pages at a time, with 30-to-90 days in between installments, and being charged $20 in a $4 per-installment payment plan, it’s an extreme irritant, and it continues to baffle me that there are enough people who enjoy that sort of experience that it makes sense for a big publisher to continue to make stories like that.

The opening set-piece involves Agent Brand of S.W.O.R.D. (the acronym-ed agency that works the alien beat in the Marvel Universe) on a fairly routine mission exterminating some old X-Men alien enemies, a mission that goes really wrong, and it’s up to the X-Men to save her and the city of San Francisco, which she is plummeting towards. And then a Sentinel (giant mutant-hunting robot, for the X-nostics in the reading audience) made entirely out of meat, which can shoot Brood aliens out of its finger tips (the Brood are basically just the Aliens from the Alien/s movies, but with eyes) attacks.

Increasingly gigantic threats of a similar nature continue to attack the Astonishing team, each a heavily modified and/or creepy and weird riff on a classic X-Men antagonist. The team follow the trail of apocalyptic threats back to their source, which is an unusual villain with a great M.O.

(And part of the reason I found it so great was that it was something I used to think and worry about when I was a teenager. My first exposure to Marvel’s merry mutants came about through that awesomely, hilariously shitty cartoon on Fox in the ‘90s, and it always bugged me that the mutants were so angsty about basically being normal people, only better-looking and with super-powers and they lived in a mansion with a holographic play room and jet planes and a bunch of other super-powered hotties; they seemed dealt an infinitely better hand than the only other mutant heroes I had much experience with, The Teenage Mutant Ninja Turtles, who were so deformed they had to hide their very existence from the entire world, and lived in a fucking sewer.)

It might be selling it short to describe it as a series of action set-pieces climaxing with a classic to kill or not to kill superhero moral dilemma, but that’s what it is. It’s too Ellis’ credit that he writes the characters, their dialogue and their relationships so well that it’s difficult to notice that’s all the story really is; or, if not notice, than at least care.

Yes, I found myself thinking, okay, sure, this is just The Astonishing X-Men and Storm and Agent Brand getting in a bunch of big fights until Scott gets to think long and hard about maybe laser-blasting a bad guy to death instead of arresting him, but I don’t care, because I like hanging out with Ellis and Jimenez’s versions of these characters so much. 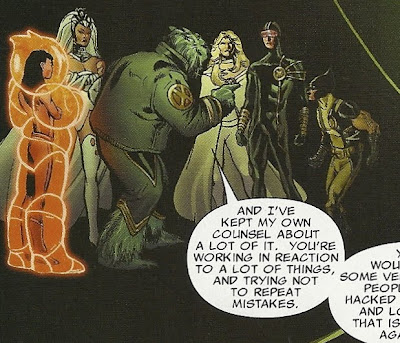 We’ve seen Jimenez draw the X-Men before, but he’s an extremely good fit with Ellis’ version of them. Like Morrison, Ellis is a “realistic” writer of super-comics; while the latter started from the premise of mutants as a mainstreaming genetic minority treated as an ethnic and/or cultural minority, Ellis compromises Whedon’s mutants-as-superheroes and Morrison’s rescue/emergency forces and humanitarian (mutantarian?) concern takes, and he writes their dialogue with the sort of withering sarcasm born of lifelong friendships and explains the nutty super-science in a way that at least seems vaguely plausible, if not exactly something on the cusp of being reproduced in laboratories in the next 50 years (There’s a gigantic Sauron in this comics, which means not only does the reader have to accept a were-pterodactyl energy vampire, but a Godzilla-sized clone of a were-pterodactyl energy vampire).

Jimenez is incredibly gifted at rendering people, and his superheroes all have the benefit of looking like actual people in good shape and with generally cool costumes, rather than any sort of exaggerated cartoon (Not that there’s anything wrong with that, of course). He gets to draw a generous swathe of X-Men antagonists in the course of the story, generally altered in some way, so that Jimenez is both, say, drawing a Sentinel and drawing a new take on a Sentinel. Because of the realistic nature of his drawing style, even these horribly ridiculous villains and dangers borrow the feel of the main characters. Simply put, Jimenez draws a perfectly little super-comic world, in which all of the elements seem to belong and they all flow together rather than clashing against one another.

He does a pretty great job designing the characters and costumes, too. 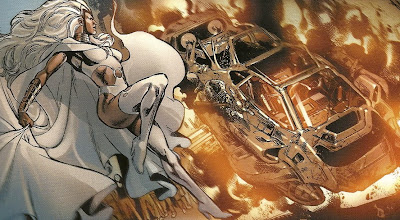 I really liked his Storm. Not only does she look like “herself” (regal, imposing and at least half-a-head taller than everyone else), but he gives her a new costume that is essentially just her original black costume, only in white, the color that she became more associated with post-‘90s. 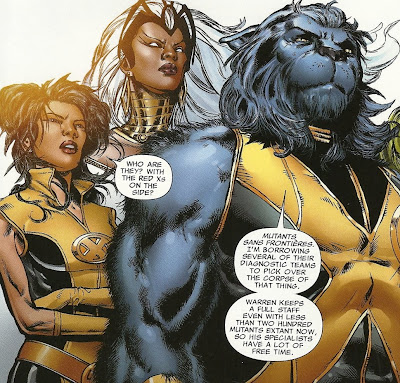 Jimenez does a swell job with Armor too. She looks like a teenager, she looks like a real person, and, when she’s wearing her energy armor, it has one look and she has another, and both are present at once; that is, even though she’s wearing an abstracted cartoon character made of red energy, she’s still herself inside it. 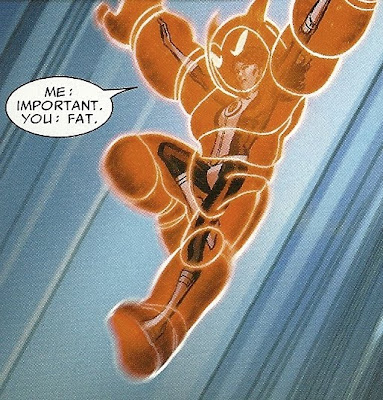 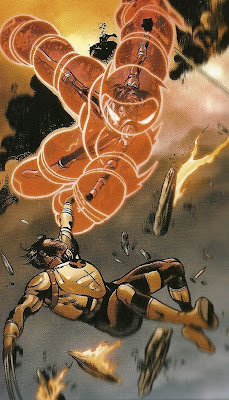 I could imagine myself still reading X-Men comics regularly if Jimenez was drawing them instead of Greg Land or whoever.

That said, however, I suppose I should note that Jimenez’s pencils, finished and inked by his frequent collaborator Andy Lanning, are here colored by Frank D’Armata, who seems to be doing his level best to overpower the art with effects so as to make it look as awful as most of Marvel’s modern “house style” comics.

Between the blurring of lines to replicate the focusing of movie cameras or to simulate motion (a weakness of film being replicated in a medium that is itself immune to that weakness) and the glowing lights and flares, far too many of the panels are far too hard to read.

Do you need to wear glasses to read? If so, then a lot of these panels look like they would if you tried reading them without your glasses.

Do you not need to wear glasses to read? Hmm. Then I don’t really have a good metaphor. I guess they just look out of focus. And apparently Marvel wanted them to look out of focus. Because it looks more like a movie that way? I don’t know. Personally, I’d rather see speed lines in good old-fashioned ink, and lightning bolts and laser beams drawn by Jimenez and Lanning’s hands, rather than dropped in later from some computer program so that it looks like Storm bought her super-powers at Spencer Gifts at the mall and that Cyclops' eye-beams have the power to obliterate images.

Next up: Ellis and Kaare Andrews’ Astonishing X-Men: Xenogenesis! Yes, Ellis wrote one story called “Exogenetic” and then later wrote one called “Xenogenesis.” He apparently made a bet with his editor that he would use only the first 12 Scrabble tiles he pulled out of the bag to title all his stories.

That is the trade that contains the comic with this cover: 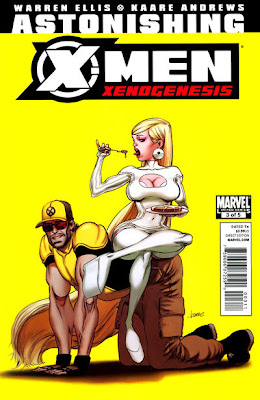 So we’ll finally learn what the hell happened inside that issue to justify that cover. I can’t wait! Can you? Well, you have to!
Posted by Caleb at 10:47 AM

Hmmmh...Maybe I should get this series.