Justice League #3 (DC Comics) Alright Justice League, that’s three strikes. You’re out. Or off, I guess. Off my pull-list.

I was letting your first issue or two slide by at the 22-page/$3.99 price point, despite your publisher’s “drawing the line at $2.99” pledge, and despite the fact that the solicitations for the issues promised that they would be 40-pages (minus 10 pages for ads, they should still have each included 30 pages of comics).

But this is the thire issue in a row in which I’ve paid efor 30 pages of comics and received just 22 pages. And I honestly can’t believe that you ro the guys who make and publish you think this 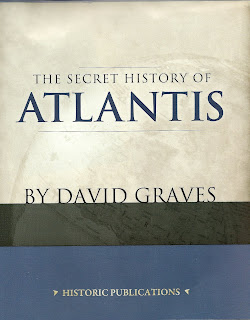 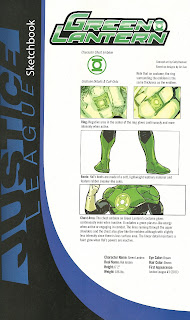 is just as much comics, or has the exact same value to a comics reader, as this 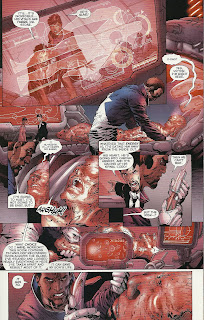 Besides, Jim Lee’s well-drawn (if often rather poorly-told) storyboard for Geoff Johns’ first draft of a rejected Justice League movie screenplay obviously isn’t for me. 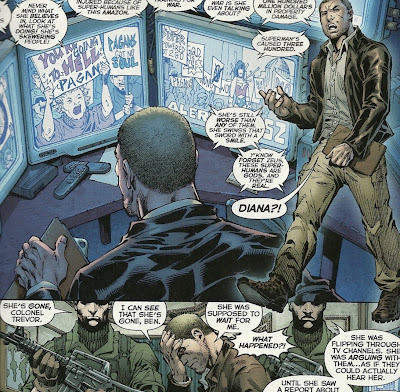 With the new Wonder Woman title focused on a story set in her present, this issue is where we first meet Wonder Woman in the New 52 (chronologically in New 52 time, if not in real-world time, as she’s had several appearances in other books set five years after this issue) and, given the chance to completely reinvent the charater as something closer to her original conception, or something brand-new for the 21st century, Johns and Lee opted so change the blue in her costume to black.

They go with the naïve, fish-out-of-water characterization of George Perez’s ‘80s reboot and, weirdly, Jodi Picoult’s short run (which was set some ten years after Perez’s), and the Amazons are once more a militant, warrior culture, with Wonder Woman their most fight-happy member. The men of Man’s World fear her and her phallic, penis-chopping sword, little girls liker her, and she lives to dismember and skewer her enemies.

It’s not just Wonder Woman that seems too hardcore here. Superman dismembers and decapitates his foes as well. 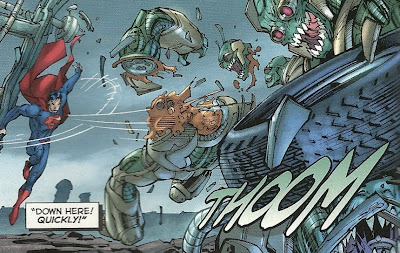 I suppose the Parademons (they haven’t used that word yet, but that’s what Darkseid’s footsoldiers were called in the Old 52 U) might be cyborgs made out robot bits grafted to dead organic material or something, but the story lacked the bit where Superman says, “My X-ray vision reveals these things are already dead, so no need to hold back!” It does show him kneeing one’s jaw so hard it explodes and telling another to “Smile for me” before hitting it in the face with a truck.

Even if the Parademons are already dead, allowing him to knock their heads clean off their bodies, why does Superman cutting loose result in such sadistic violence? Is that what New 52 Superman wishes he could always do when he’s in a fight? Yuck.

And, upon her first appearance before her fellow superheroes, in which she chops an enemy’s arm off above the elbow, Hal Jordan reacts to the savage, scantily-clad Wonder Woman thusly: 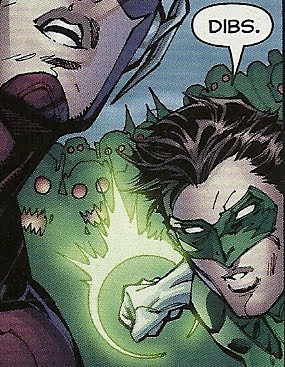 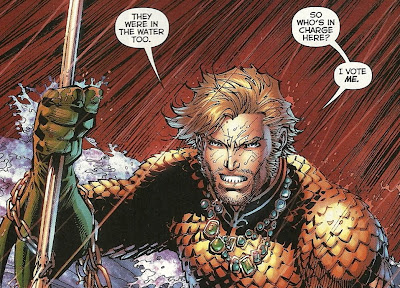 The last page is devoted to a full-page splash revealing Aquaman, and we learn that he has sideburns so severe they are threatening to become muttonchops, he loves jewelry, and he’s arrogant, and while my interest in, and fascination with Aquaman and the other characters of the DC Universe is deep, and I do really want to see what Johns and company do with them (For example, here we learn old Justice League villains T.O. Morrow and Professor Ivo are working alongside Titans supporting characters Silas Stone and Sarah Charles at STAR Labs, and that Cyborg is apparently being rebuilt with Apokalyptian technology; so far, Johns’ seems to be trying to tie everything together to form a grand, unified origin of the new DCU in much the same way Brian Michael Bendis tried to make everything connected in Marvel’s Ultimate Universe).

But I really haven’t liked any of what I’ve seen so far, and I’m not going to continue paying an extra buck for it. Comics are free if you wait long enough, and I’d much rather pay in patience, waiting for a library trade to satiate my curiosity, then with money.

Wonder Woman #3 (DC) With Justice League Dark and Justice League both dropped, I’ve down to three of the five New 52 books I tried out—Aquaman, Green Lantern and this one. I don’t expect to drop any of those three any time soon and, of them, Wonder Woman is by far the best.

Writer Brian Azzarello and artist Cliff Chiang are doing a superior job on both the writing and the art end of this book, and its head and shoulders above the bulk of the DC Unvierse product that’s coming out now, or has been coming out over the course of the past few years.

Their take on Wonder Woman certainly isn’t one I would have initiated were I in their shoes, nor is it one I particularly embrace, but they sure are doing it well. I particularly liked the rather old school Vertigo-like take on the Greek gods—specifically Strife, who here seems like a distant cousin of Gaiman’s Endless.

This issue offers the full reveal of Wonder Woman’s new origin—Rather than created by the Greek goddesses and given their gifts at her birth, she’s now a demi-god created by Zeus banging her mom, making her a female Hercules. Again, not a choice I would have made nor even really wanted to see, but when comics are this well made, one hardly has to agree with the creators’ take on a character or concept to enjoy the hell out of them.
Posted by Caleb at 8:34 PM

I think you mean Cyborg instead of Cyclops being built out of Apokalyptian tech, or I really need to pick up that issue.

Dammit. That's what I get for reviewing so many X-Men comics this month. Thanks; it's fixed.

"Comics are free if you wait long enough, and I’d much rather pay in patience, waiting for a library trade to satiate my curiosity, then with money." --2nded.

Also, I've always sort of thought that the rules against killing didn't exactly apply to aliens, esp not warring invaders. I don't have anything specific to back this up, just a sense I get from the other stories I've read. They might not kill of a Thanagarian, but one of those red-dot guys from Invasian, maybe.

Wonder Woman in Justice League pretty much read like a female Thor to me.

So far the New 52 I've enjoyed the most are Teen Titans, Supergirl, Superboy, and Red Hood.

Supergirl I'd definitely tradewait though since it's decompressed as hell.

Teen Titans earned my complete loyalty since #2 was the first time in years Bart Allen was Bart Allen instead of "generic speedster in Kid Flash costume."

Superboy gets a little too Warren Ellis wannabe in some parts, but is fairly decent.

Red Hood has been poorly served on the internet by third wave feminists. The giant fight in #3 was amazing.