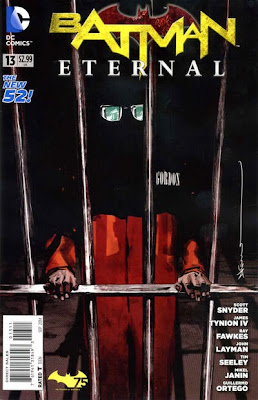 Batman Eternal #13 (DC Comics) Artist Mikel Janin returns and artist Guillermo Ortego arrives to illustrate another mostly sub-plot moving issue of the Batman weekly, this one scripted by co-plotter James Tynion IV (and, this time out, Ray Fawkes, John Layman and Tim Seeley get credited as "contributing writers" rather than "consulting" writers).

James Gordons Sr and Jr have a long talk about what a bad place Gotham City is, and whether the father has gone as crazy as the son and suchlike (I don't like Junior's eye-patch worn under his glasses; it's too much going on in the eye area, and takes away from his visual signifier. If his glasses are opaque anyway, does he really need an eye-patch, or is it there to help his eye heal rather than to cover up a gnarly wound his sister gave him, because she is dumb and bad at crime-fighting?).

Good police Bard, Harvey Bullock and Maggie Sawyer team-up with Vicki Vale and Batman to bust-up much of The Roman's operation, and block interim Commissioner Forbes from blocking their play.

Cluemaster blows up one of daughter Stephanie Brown's friends in order to draw her out of hiding.

And Harper Row sneaks into "Red Robin's Nest," hopefully to steal every single one of his costumes and burn them, forcing Tim to wear something less horrible-looking in any and all future appearances. 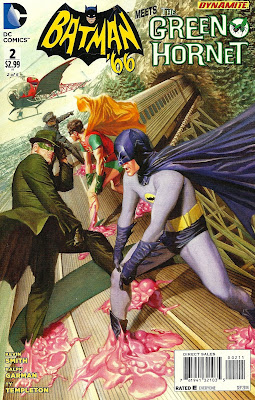 Batman '66 Meets The Green Hornet #2 (DC) If you thought General Gumm was a strange villain to use in this six-part Batman/Green Hornet crossover, even if he was involved in their television show crossover from decades ago, well it would appear that you thought right, as a classic Batman villain shows up rather unexpectedly about halfway through this issue, Gumm's fossil heist from the previous issue apparently all being a sort of test to prove his worth to his new partner.

I like the way co-writers Kevin Smith and Ralph Garman have the two pairs of superheroes solving their various challenges independently in different ways (escaping the trap Gumm set for them atop the train at the climax of the last issue, finding Gumm's hideout in this issue), and artist Ty Templeton continues to do his expected superb job.

Just one problem though! On page three, Batman and Robin abandon their boots and booties to escape, but, on page four, colorist Tony Avina miscolors their bare feet blue and green respectively, apparently thinking they were still meant to be wearing their footwear.

I've thought about this for two whole minutes now, and I'm afraid I can't think of a plausible way to no-prize that mistake away. 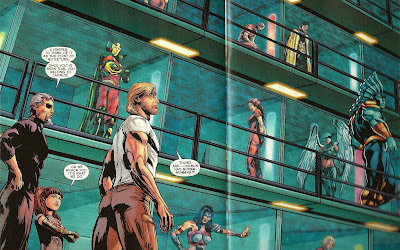 The New 52: Futures End #9 (DC) In this Patrick Zircher-drawn issue, Cole "Grifter" Cash gets a look at some of the prisoners on Cadmus Island, including such heroes from Earth 2 as Fury, Power Girl, Aquawoman, Hawkgirl, Dr. Fate and Mister Miracle, all easy to identify because Cadmus apparently lets them keep their costumes on, while other have to wear more standard issue orange jumpsuits.

That must be some security set-up if Mister Miracle hasn't escaped yet. I mean, that's his whole power-set isn't it? He's a super-escape artists, able to escape from any trap or prison. What exactly is he doing in a jail then? They didn't even strip him of his gadget-festooned costume, or put him in a straight jacket or handcuffs or shackles and manacles or anything (Maybe it woulda made more sense to have him be the escapee that we see get busted by an OMAC unit when we were first introduced to the island?). 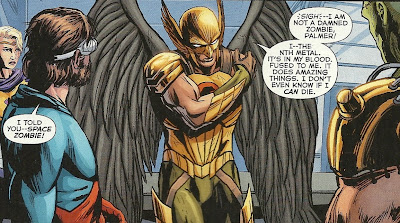 Also of note in this issue? Hawkman comes back from the dead by...and let me sure I've got this right, because it's kind of technical...getting better. I knew from the pages of Justice League United that New 52 Hawkman now had a Wolverine-level healing factor that allowed him to regrow a severed arm, but I didn't realize that the adamantium Nth metal in his bloodstream could even resurrect him from the dead!

But it apparently totally can.

Other stuff happened, but nothing terribly interesting.

Scooby-Doo Team-Up #5 (DC) I can't quite put my finger on it, but something about a couple of the characters in this panel seems remarkably off-model. Scooby's heads sort of in the way, though, so I can only be so sure.

(Much more on this book later, by the way.) 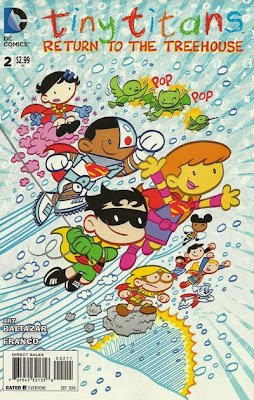 Tiny Titans: Return to the Treehouse #2 (DC) Blue Beetle, Cyborg, Starfire, Supergirl and Robin head to the arctic circle in search of their tree house, which the Brainiacs shrunk and stole from them (The plan? To use Superman's crystal apparatus to call Brainiac and ask him to make the younger Brainiacs to give them back their treehouse).

It doesn't work, but they do meet Superman, Bizarro, Match (who is a Bizarro Superboy in Tiny Titans), Bizarro Supergirl Bizarro-Girl and the perhaps self-explanatory Duckzarro.

"I know, I know," Cyborg tells a confused Blue Beetle in the last panel, "It's hard to believe...but Duckzarro is in our continuity."

You know what else is hard to believe? That DC ever stopped publishing this series, but I'm glad it's back, at least for now.
Posted by Caleb at 5:15 PM

Batman and Green Hornet was loads of fun, and so was Tiny Titans.