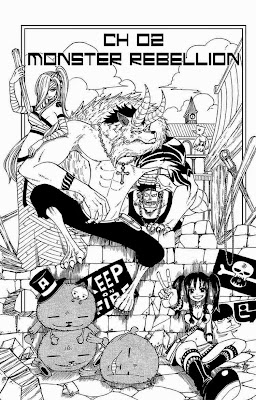 I reviewed the first volume of Hiro Mashima's new (to the English language and U.S. markets) Monster Soul for Good Comics For Kids. Mashima's the guy who did Rave Master which I tried and wanted to like (because of the art), but couldn't get into, and Fairy Tail, which I made it about four volumes into, liking it a bit more, but it fell by the wayside on account of there being, like, a million awesome comics being published all the time these days. I liked it okay; I would read another volume, but don't think I'll be following it as its released, as I'm currently doing with, say, Animal Land, Cage of Eden, Flowers of Evil and Yotsuba&!. 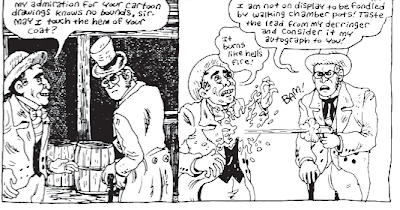 I reviewed Noah Van Sciver's Youth Is Wasted for Las Vegas Weekly. That's a pretty great collection. I really like that guy's comics, and there's an introduction by current Sinestro artist Ethan Van Sciver (Noah's brother). I know comics are likely only a part of their lives, but, since I know them both exclusively through their comics work, I have a hard time imagining them, at, like, Thanksgiving dinner or whatever. In my head, Noah Van Sciver looks like drawings of him I've seen, whereas Ethan Van Sciver looks like Barry Allen in his Flash costume in my mind's eye.

Among the stories included are that awesome two-page one about a 19th-century cartoonist, from which the above two panels are taken, and several rather remarkably long, serious, affecting stories, which may come as a surprise to those that know Noah Van Sciver mainly from his gag comics linked-to online. 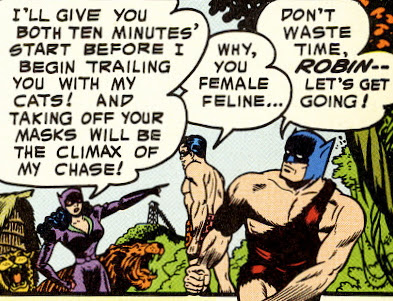 Finally, I reviewed Batman: A Celebration of 75 Years and The Joker: A Celebration of 75 Years for Robot 6. I found them both fairly fascinating, but, in both cases, more so as windows into how DC perceives and promotes the history of those characters right this moment, and as sorts of conversation pieces; fans will find themselves engaged in perhaps somewhat heated, subconscious dialogues with the books, regarding what stories, what creators and what takes are included, and which are not. I hope to pick them apart more exhaustively here in the near future, more along the lines of "Ha ha, look at this funny panel!" and linking to reviews of some of the suggested content more than anything as formal as I what I wrote for Robot 6.

Another new book that came out this week that I did not review was the new Teen Titans #1, the relaunch of the relaunched and rebooted Teen Titans that debuted in September 2011 along with the rest of the New 52 titles and was then canceled. Presumably for marketing/sales purposes, as this roster is almost identical to the previous one, and there's a new creative team attached.

The cartoon was surprisingly funny, reminding me of the generally excellent Teen Titans cartoon from a few years back, cut with a Cartoon Network original and/or old-school Adult Swim cartoon. I know DC has a comic based on the cartoon being published at the moment, and I'm sure it does well enough, but while I was watching that and reading Teen Titans, I kept thinking to what Boom has done with Adventure Time in terms of comics.

I'm still a little bewildered by the New 52's 180-degree spin from the popular and recognizable versions of the Teen Titans characters seen on that show. Raven, Robin and Beast Boy are on the new Teen Titans line-up in Teen Titans...sorta. Robin is actually Red Robin and looks nothing like the Robin in the cartoons (and he doesn't even have a staff!) and Raven...man, I don't know what's up with New 52 Raven.

I read the new issue though, and that's more than I can say for any issue of the previous volume (I did suffer through the few issues included in the The Joker: The Death of The Family mega-collection of all the tie-ins to the Batman story arc, and, man, it was rough). I did so because I like the writer and artist well enough to not look away in horror when I see their names.

It was okay. I didn't like it a third as much as Chris Sims did, and he's generally a pretty smart, insightful guy whose opinions and comics assessments often align with my own though, so I suppose your mileage may vary. It didn't do anything to correct the aesthetics problem of the title, and the cover, like the advertising campaign, really seems to be coming from the desperate, insincere place of a middle-aged uncle trying to be cool to relate to the kids.

They do a decent enough job of introducing some of the characters and their powers, but, given that this was more-or-less my first exposure to all of these various characters in this New 52 context (save Red Robin), there was still a lot I didn't know, get or understand, like what Wonder Girl's powers are, for example, or how they work.

I was also surprised that the Titans seemed to kill their foes left and right, or at least to express extreme apathy as to whether they did or not (Oh, and there's a Mr. Power and a Mr. Black who work at STAR Labs, the latter of whom uses British slang—they're not meant to be and Manchester Black, are they...?).

Speaking of Sims, I enjoyed this post, and completely concur with the headline. Given the circumstances under which they asked Ramon Perez for a pitch—it was apparently Zuda-related—I suppose it makes sense that his awesome looking (and sounding) The Adventures of Mister Miracle & Big Barda pitch went down, and, as Sims notes, it's not exactly like Perez has had a bum career or anything these last few years. In reality, it seems like more of a loss for DC, who one would think would be all over a series they could promote as "from the critically-acclaimed, Eisner-winning creator of Jim Henson's Tale of Sand."

I don't really get the publisher's stance on continuity, either; they have that New 52 line thing going, but they do publish a bunch of superhero stuff outside of the DCU/New 52, mostly kids stuff and digital-first series, and then there's those weird "Earth-One" branded OGNs, so a it's not like it would have been impossible to print a Ramon Perez Mister Miracle & Big Barda series or original graphic novel.

Since the publisher's relaunch, the characters' only appearances have been in Earth 2, and it looks like they will play a role in the dark, dystopian, kill-y weekly series, New 52: Futures End. They both also appeared in recent-ish Justice League Beyond stories, too; those were really good.

Finally, did you read Tom Bondurant's analysis of DC's October solicitations yet? It is, as usual, better than mine. But then, Tom generally knows what he's talking about, and thinks before he starts typing. Me? Not so much. goog
Posted by Caleb at 6:52 PM