So guess who I ran into the other night 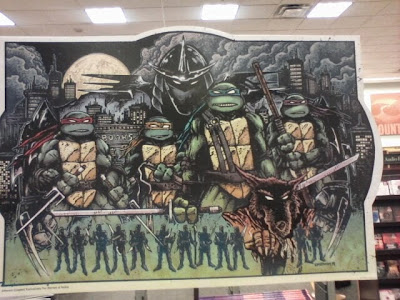 I was in my local Barnes and Noble the other night, walking between the cafe and the graphic novel section in the back corner of the store, when something oddly familiar but out-of-place caught my eye. There was a table of gaudy green plastic set up about midway between the service desk and the music section, decorated with a very large, wouldn't-this-look-nice-haning-on-your-wall image of Kevin Eastman and Peter Laird's Teenage Mutant Ninja Turtles characters on a stand in the middle of the table.

The merchandise all around it was all associated with the current Nickelodeon animated series featuring the characters, including such random things as Lego sets and starter reader books and action figures, but co-creator Kevin Eastman looks like he pretty much jsut drew the characters as he always has, the only nod to any post-Eastman and Laird life of the characters being the variously-colored masks on the four ninja turtles.

As classic as it may look, the signature, barely visible in this picture, but the blades on the back of The Shredder's left hand are pointing at it, reads "Eastman '14." Even harder to make out is the fine-print in the lower right-hand corner of the image, which reads, "Artwork created exclusively for Barnes and Noble." While I woulda preferred to see it on a table filled with Teenage Mutant Ninja Turtles comics, it's a hell of a nice image (someday it would be neat if someone tried making a movie or animated something-or-over that looks just like that, only in motion), and that's cool that Barnes and Noble presumably commissioned an original piece of art from the co-creator of the characters to put up in their stores as the latest movie looms in theaters.

I'm all for randomly stumbling across large, public displays of art from favorite cartoonists in unexpected places.
Posted by Caleb at 6:36 PM

At the LCS, we're having a Turtles event and signing with one of the miniseries artists. Reaching out to IDW (and judging from their recent comic shop targeted email) they've got no tie-ins, nothing to do with the movie at all. And, understandably, little interest in helping it out.

Our local Barnes and Noble had a Ninja Turtle story time and activity for kids, yesterday. My 6 year old won that same poster in the raffle. It reads: artwork exclusively for Barnes and Nobles.