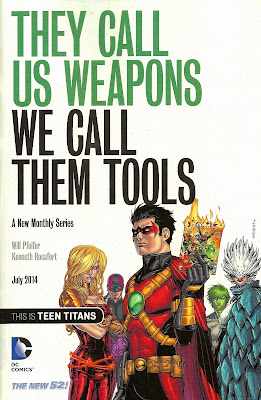 I am madly in love with the ads for the new relaunched New 52 Teen Titans, which looks to be the exact same as the previous Teen Titans—terrible costumes, terrible logo, practically the same line-up—but with a new #1 and a new, better creative team. And a new ad campaign!

Who calls the Teen Titans "weapons"...? Is it the Justice League? I'm assuming it's the Justice League, since Red Robin is holding a burning copy of Justice League #1 in his hand there (You know what would be really edgy, Tim? If you were burning a copy of Action Comics #1).

I'm vaguely aware of the fact that there was a storyline somewhere—maybe a Teen Titans and Ravagers crossover?—that maybe had something to do with clones or teenage superheroes being grown or used as weapons or something. I never read any Teen Titans. It was by Scott Lobdell and Brett Booth, and it looked a little like that, only a thousand times worse. It looked like a joke of what a rebooted, started-from-scratch Teen Titans comic book in the second decade of the 21st century might look like.

Anyway, I kinda dig the whole weapon/tool joke. It sounds like a joke from eight years ago, which feels about right for a New 52 Teen Titans comic.

In addition to the "This Is..." house ad, DC also has a six-page preview of Teen Titans in the backs of some of their books this week, a sequence which includes the cover for the first issue, festooned with funny Twitter Chirper hashtags: 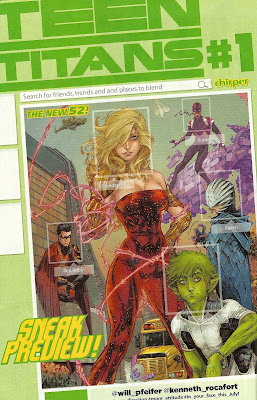 Social media! That's what teens are into!

I do like that they added the names next to the characters, since they don't look much like their pre-New 52 incarnations, or like the characters appearing in such cartoons as Teen Titans, Young Justice or Teen Titans go, with the exception of Beast Boy, who was previously introduced as red rather than green in the pages of Ravagers.

So we've got Wonder Girl, who is a blonde girl with huge breasts, gold, metal claws and a length of glowing red Spider-Man webbing. We've got Red Robin, still looking like a "Heroes Reborn" version of Robin. We've still got Bunker, the new character with can-make-glowing-bricks-appear powers. And we've got Raven, who wears a cloak of huge, blue, reptillian scales and a mask that obscures her head and face made out of...knives? Bones? Coral? You know, like a raven.

That's followed by five pages featuring panels of the various characters in action, saving a school bus from high-tech terrorists, while their names appear next to them, and we get little snippets of narration or dialogue, saying things like, "...see, that's the thing. I don't have a relationship with her" and "You look like you could use a little excitement."

This is really great. It really looks like someone at DC called a meeting, and everyone sat around for a while trying to figure out what they could to "fix" the Teen Titans title, and all they came up with was hashtags and adding at least one character who resembles a character from the cartoons.

At least Rocafort is a good artist.

Some of those other "This is..." house ads are pretty amusing, but still not in the same class as the Teen Titans one.

There's the dick-joke ad for Grayson... 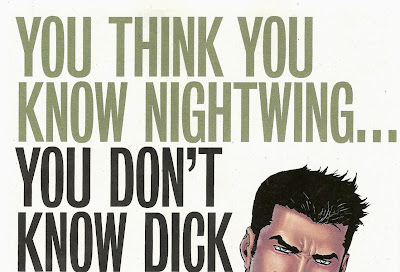 And then there's this one for New Suicide Squad... 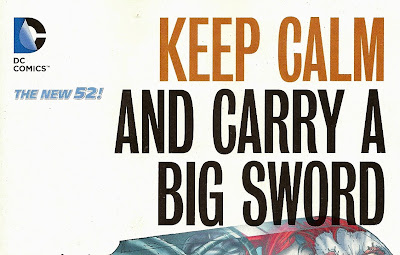 ...in which DC tailors the "Keep Calm and Carry On" meme to Deathstroke, the Terminator, who, of course, carries a big sword.
Posted by Caleb at 9:54 PM

Oh Teen Titans...whatever in the world happened to you?