Spider-Man is a go-go head. 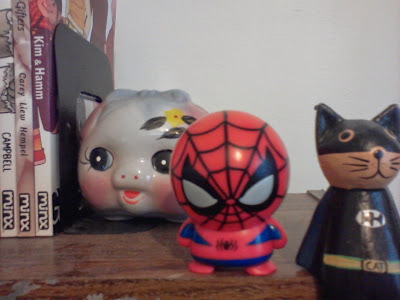 My 22-month-old nephew was in my bedroom at my ancestral home this morning, and spotted this little Spider-Man toy I bought on a whim from a vending machine in a movie theater lobby a few years ago. He immediately pointed at it and exclaimed "Go-go," his word for a basketball, which is one of his favorite things in the world.

When he was handed the toy, he handled it curiously for a few moments, seemingly unsure what to make of Spider-Man's body. His older sister grabbed it, snapped the head in half (the toy came in three parts), removed the body, and then re-snapped the head back together.

Seeing this, my nephew's eyes lit up and he clapped with excitement, "Go-go!" He then proceeded to carry Spider-Man's perfectly round head around the remainder of the visit, clutching it in one hand and a small plastic ball in the other. Both of these he threw to various family members and tried (and failed) to catch when they threw them back to him,

Obviously, the toy design has purposely exaggerated the size of Spidey's head in relation to his body, but I guess I never realized just how much Spidey's head looks like a basketball until today.
Posted by Caleb at 7:05 PM