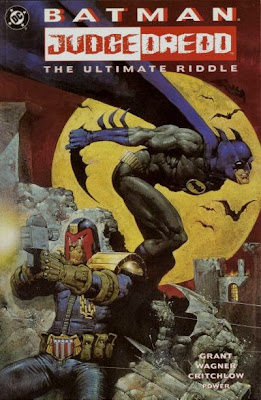 As mentioned in the last installment, 1995's Batman/Judge Dredd: The Ultimate Riddle seems to have been the result of some sort of scheduling issue, perhaps with the artists or with some unguessable outside factor. The story is not so inspired that one imagines writers John Wagner and Alan Grant having a brilliant Riddler story they wanted to tell, and decided to tell it before they got to a more proper, epic conclusion to the their stories of the two crimefighters clashing, and it exists in an almost Elseworlds-like corner of the Batman line, so it's not like editorial pressures should have been a factor.

Whatever the reason, readers of Vendetta in Gotham were told to expect Die Laughing in 1994, but instead got no Dredd/Batman team-ups in that year, and then got The Ultimate Riddle the following year. And whatever the ultimate origins of Ultimate Riddle, it brought painted artwork back into the fold, with artist Carl Critchlow handling the majority of the book (31 pages) and Dermot Power handling the rest (13 pages). 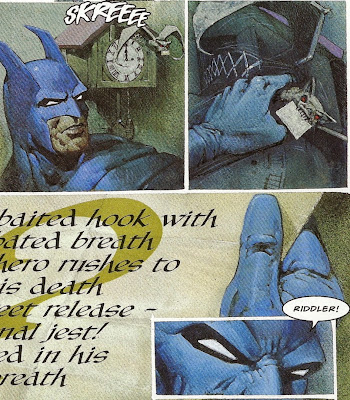 The story begins with Batman receiving a clue from The Riddler, and chasing the villain down, before a strange green light zaps them both, and they find themselves sharing one of many hanging cages in a dark room. In one of them is Judge Dredd, and the felon he was pursuing before being zapped there, someone he refers to as "The Creep," but who appears to be a The Creep and not the The Creep. Other warriors from other places are in the other cages; most of these have convincing enough names and looks that I suspected some of them might have been pulled from Judge Dredd's home comics, but a quick Internet search doesn't show any other appearances for Mekarnos Mandroid, Brutalix, Living Nightmare, Sauron-Dos or Gulagg of Gnulp anywhere else. There is one other character from the DC Universe...sorta. This is Yanok, who is a member of the Khund race of aliens in the DCU. 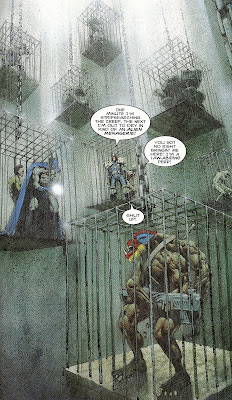 They've all been gathered by a mysterious, weird-looking figure with a magical wand calling himself "Emperor Xero." Upon his arrival, The Riddler immediately demands he be paid for luring Batman into a trap, and Xero responds by killing The Riddler dead. On page 9. If that seems like a pretty quick exit for The Riddler in a prestige format Batman book with the word "Riddle" in the title—and it sure seemed like it to me—don't worry; all is not what it seems.

Xero has gathered these gladiators to play a game of his own amusement. He produces a giant, eight-sided Dungeons & Dragons die to roll to choose the "quarry." It will be the task of the other seven to hunt and kill the quarry, and whoever successfully does so will be set free; the others will all be killed. 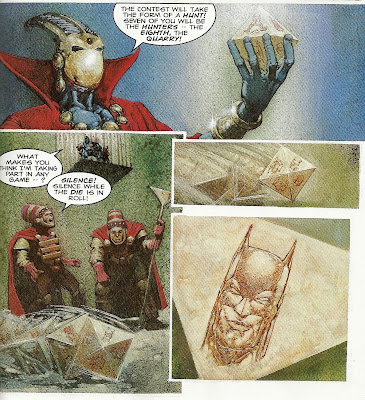 The die lands on Batman, and Xero teleports the eight players into a bizarre urban environment—one with even stranger and more sinister gargoyles than even Gotham City—from whence the hunt can commence. 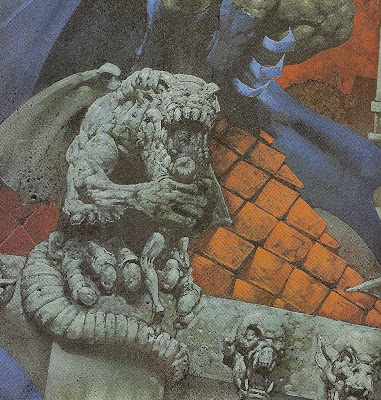 Obviously Batman wants no part of the game, as his role is to either be killed or to kill Dredd and the other six hunters. And while Dredd isn't as adverse to killing as Batman, he shouts at Xero, "I kill for no man's entertainment!" (No, Joe? What about for the entertainment of your many readers?).

The other six have no moral qualms about killing Batman, Dredd or each other. The entire middle act of the book features a sort of violent game of hide-and-seek involving the various characters, with Batman and Dredd kinda sorta teaming up as they battle the various villains, who come in such forms as an S&M minotaur, an android with a gatling gun for one hand and a rocket launcher for the other and a humanoid lizard, all the while bickering over Dredd's quickness to kill (Batman even gets pissed when Dredd puts a bullet in bull-man Brutalix's knee-cap, instead of just leaving him tied up with a bat-rope to a pillar, punching the good judge hard enough to summon blood spray and put him on his ass).

The Living Nightmare has some kind of psychic nightmare powers, which he uses on Batman, summoning up some of his wort fears, which gives Power the opportunity to do a neat inside-Batman's-mind splash page of the sort that Simon Bisley painted in Judgement on Gotham: 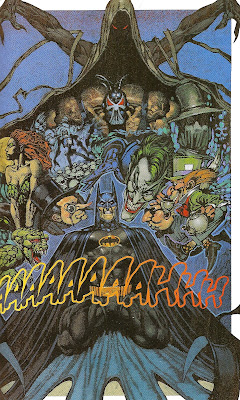 He puts in a lot more villains. Notably missing is Catwoman, who was in Batman's mind in Judgement and, among the additions, is the then rather new Bane (who was only two years old at the time).

Now, to spoil the ending, so don't read on if you don't want to know what's-what with the story, it turns out Batman and Dredd are the only players left standing and/or breathing at the end, and, Batman manages to figure out The Riddler's riddle from page 2 just in time to unmask Xero.

This whole thing was an elaborate ruse built by a super sci-fi power scepter that appeared in front of The Riddler. 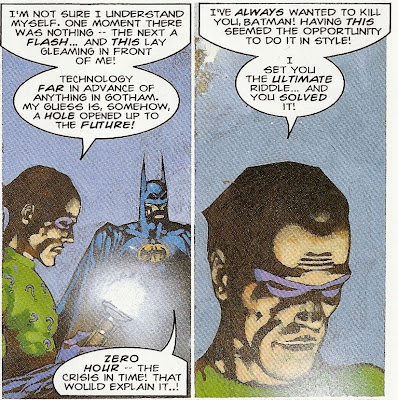 So that makes The Ultimate Riddle maybe the weirdest of DC's Zero Hour crossovers; so weird it wasn't even labeled as such! (You know, DC could really do with some trade paperback collections of Zero Hour tie-ins. A lot of those ones where time is messed up are really rather good; certainly there were enough solid Batman ones to fill a decent-sized trade paperback).

I was thinking about it after reading this, and I couldn't recall any other occasions in which Alan Grant had written The Riddler, who was more-or-less in some sort of semi-retirement for a large chunk of the 1990s (Maybe everyone liked Neil Gaiman's "last" Riddler story in 1989's Secret Origins Special #1 so much that no one much felt like writing new Riddler stories for a while, with the possible exception of Peter Milligan in "Dark Knight, Dark City"...?). At any rate, he's one of the few Batman rogues I can't think of an example of Grant writing during his long collaboration with Norm Breyfogle, although maybe he did and I'm just having trouble remembering. But Riddler's stated motivation of always wanting to kill Batman seems a little...off to me.

After an intense showdown with an interesting result, The Riddler is wounded and Batman gets his hands on the scepter, their ticket out of here, as Dredd puts it, adding, "Any idea how it works?"

"If Riddler can figure it out, we can," Batman says.

And so this story seems to have a little in common with the first crossover, being once again fully-painted, and a bit more in common with the second (featuring just a single Batman villain and no Dredd villains save the perp he was in the middle of strip-searching when they were zapped here, taking place partially in Gotham and not at all in Mega-City One).

It's not until the next—and final—Dredd/Batman crossover that the series will again combine the settings, supporting characters and villains of both franchises. And what a big, epic story that will be, boasting a length somewhere in the area of double that of the first three, and featuring The Joker and all four Dark Judges...
Posted by Caleb at 9:23 PM