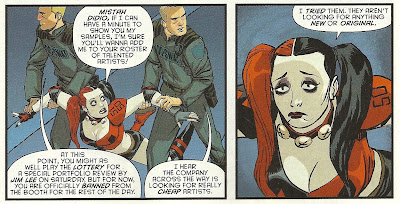 The above is a two-panel sequence from this week's Harley Quinn Invades Comic-Con International San Diego #1, a new one-shot by regular writing team of the surprise-hit Harley Quinn monthly series, Amanda Conner and Jimmy Palmiotti (the issue is drawn jam-issue style by nine different artists, although the above panels come from artist Dave Johnson's pages).

The premise of the comic, in brief, is that that Harley and her supporting cast are visiting CCI to sell merch, and she is using the opportunity to shop her portfolio of sample pages around (she's created a comic book character called Hurl Girl, which Conner draws). In punchline of the above joke is apparently that DC's direct market and superhero IP rival Marvel Entertainment doesn't pay as well as DC does (I guess...? It's one of the many inside baseball jokes that are so inside I think you actually have to work for DC to get, appreciate or care about them), and, of course, that "They," which would be Marvel, "aren't looking for anything new or original."

That hopefully good-natured slam comes in a comic book about a once-serious violent psychopathic comic book character now played for laughs invading a comic book convention (as in Keith Giffen, Alan Grant and Kevin O'Neill's 1993 Lobo Convention Special #1), a character created by in 1992 by Paul Dini and Bruce Timm, and currently being used in her second ongoing series by Conner and Palmiotti as DC's answer to Deadpool, a crazy, anarchic character who hears voices, frequently breaks the fourth wall, and is portrayed as silly and comedic in her own book, but seriously outside her own title.

Excusing the fact that DC's current editorial strategy is re-do and re-mix pre-existing characters, costumes and even stories as part of their New 52 initiative, I think it's worth noting the recent bibliograpies of the writers making fun of Marvel's unwillingness to try something "new" and "original."

Conner's most recent work for DC prior to co-writing and providing covers for Harley Quinn was working on a prequel to Alan Moore and Dave Gibbons' 1986 Watchmen, over the very loud and very vociferous objections of the original author, featuring Moore and Gibbons creations inspired by superhero characters from the 1960s, created by a bunch of other creators.

The much more prolific Palimiotti's recent output for DC has consisted mainly of a very long run with co-writer Justin Grey on Tony DeZuniga and John Albano's 1972 Jonah Hex character, which, as it neared its cancellation, included a Booster Gold/Hex team-up that followed the pairing of the characters by Geoff Johns and Jeff Katz in 2007 and a Hex-thrown-into-his-future storyline that followed the same premise that Michael Fleisher-written Hex series from 1985.

He and Gray also wrote a bunch of miniseries based on Grant Morrison's reimaginings of the Golden Age Freedom Fighters characters and took over the Batwing title starring a legacy version of Morrison's re-creation of a black Batman originally conceived by Frank Robbins and Dick Giordano from a 1973 issue of Batman. They are currently writing a character dubbed "G.I. Zombie," whose name echoes that of the 1962-created Robert Kanigher co-created character G.I. Robot, and who is a monster serving in the military, like the characters of J.M. DeMatteis/Pat Broderick 1980-created Creature Commandos.

It's also a fucking zombie comic. Launched in 2014.

I'd like to think that Conner and Palmiotti were being ironic in their Marvel diss, that they were lampooning DC and themselves rather than taking a crack at their main competitors, as a quick survey of the output of the two publishers features a very, very, very wide gulf in terms of quality, originality, relevance, vitality and, of course, variety. DC mostly publishes New 52 comics which, with few exceptions, all look alike and share a very similar tone, whereas Marvel's output includes incredibly quirky books like a Mike Allred-drawn Silver Surfer, that All-New Ghost Rider, a superhero-humor-comic-that-is-actually-funny She-Hulk, sad-sack super-crime comedy The Superior Foes of Spider-Man, and books like Hawkeye, Daredevil, Moon Knight and Ms. Marvel.

I don't want to get into a Marvel vs. DC thing here, but Conner and Palmiotti apparently do, and for anyone at DC to be trying to troll Marvel in 2014 for being adverse to anything new and original is, well, crazy-sounding.

Like I said, I would like to think they weren't serious, but those panels immediately follow this weird-ass one, in which Palmiotti and Conner have Dan DiDio making fun of the frequent (constant?) complaints from fans and ex-DC creators that DC is just way too involved in dictating stories and interfering in the creative process in a way that is weird, random, unwelcome and unproductive and, obviously, usually results in pretty shitty comics:

I think the DiDio in the comic is meant to be making fun of the idea of letting creators go crazy and do what they want on their books, but that actually sounds kind of awesome, doesn't it?

The reason DC doesn't do that, DiDio's avatar seems to say, is that they won't sell more than a thousand units, which seems pretty contrary to much of the available evidence of auteur-style/creator-driven comics in the direct market that outsell a great deal of DC's output (Walking Dead, Saga, anything written by Mark Millar no matter how terrible it is), the general success of Marvel's current editorial model in relation to that of DC's (which almost always has a greater share of the market than DC's comics, and produces many more positive reviews) and even in-[DC's]house evidence, with DC's consistently best-selling comic being the one where Scott Snyder and Greg Capullo do whatever they want with Batman, and other outliers like Geoff Johns' Green Lantern franchise or Grant Morrison's Batman Inc being exempted from "New 52" continuity, save for a costume-tweaking here or there.

They're pretty damn weird jokes to be sharing a page, with creators Conner and Palmiotti arguing in favor of strict editorial control of books and that sales are the best metric of success in one panel, and then arguing in the next to panels that Marvel isn't willing to try new and original ideas like DC is.

I hope to discuss the book further and at greater length in the near future, when I get some time to review-review it, but, in the meantime, I wanted to at least stop and point at the unbelievable chutzpah of the Conner/Palmiotti writing team. This doesn't seem to be a case of the pot calling the kettle black so much as the pot calling the good china black.

Eesh, man, you weren't exaggerating even a little bit when you called that writing "some chutzpah."

I have a hard time believing that even die-hard DC fans could have read these jokes, if that's what you want to call them, and laugh at them with any sort of earnestness.

As I recall, Jimmy Palmiotti had a major falling out with Joe Quesada after one ascended to Marvel editor-in-chief and the other co-wrote a punch of third tier DC books. I assume at least some of that bad blood has been sponged up with Painkiller Jane being revived at Icon, but Palmiotti isn't swimming in Marvel work as his DC load lightens. Alternately, it might have been a dig at DC that was directed at Marvel to get into print, while everyone with any perspective catches the dissonance.

This actually sounds terrible and reminds yet again why I've given up on DC Comics.

I'd highly recommend you read the new Dash Shaw Cosplayers issue (Cosplayers #2 Tezucon) to compare and contrast 2 comics on comic conventions. Dash Shaw's comic is a lot more honest, heartfelt and the art is fabulous.

I think that last joke was a dig at Didio, as Harley Quinn is a comic where Palmiotti and Conner do what they want without editorial interference and it outsells the majority of DC's other books. The point seems that Didio couldn't be more wrong about his sales prediction there.

As for the cheap artist dig, I took it more as a comment on Harley's poor artistic skills than a critique of Marvel's paying practices, but I think reasonable minds can disagree on that one.

As Frank alluded to, it's also worth noting that the one original character that Palmiotti is currently writing, Painkiller Jane, is being published by ... Marvel. Very weird.

Oy gevalt. Where to begin? First off, this kind of internecine bickering was tired and gross when Bill Jemas and J. Michael Straczynski were engaging in it in the early 2000s. It's no less gross coming from Palmiotti.

Second, kind of ludicrous to talk about the other guys wanting cheap art in a book that launched with an art contest. How many thousands of free submissions did DC get from artists for that first Harley Quinn issue? Don't get much cheaper than free.

Third, judging by the less-frequent-but-still-occurring typos and the just-as-frequent lack of continuity coherence, it looks like there are a lot of books at DC that already have no editorial oversight in any meaningful way. It makes sense since so many editors have been moonlighting as writers as well.

What a weird, weird comic.