Are there any Supergirl comic books that aren't terrible? 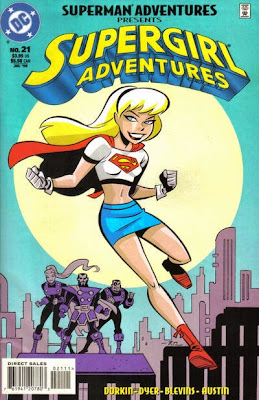 I'm asking for a friend. She's very excited about the upcoming Supergirl show, which looks tonally different than any of the 539 other live-action superhero and based-on-a-comic book shows currently on air. I liked the six minutes I saw, and was a little amazed that the preview for a Supergirl television show looked like a much better Superman movie than Man of Steel, Superman Returns and those last two Christopher Reeve movies.

I started thinking if there were others similarly enthusiastic about the show, and where they would go to find some Supergirl comics, and I'm coming up blank. Post-Crisis Supergirl is just so hard to explain, you know? The more I think about it, I can think of occasional issues of a series here or there, but I can't think of, like, a good trade paperback or collection to suggest to anyone.

The best I could come up with was Supergirl and The Legion of Super-Heroes, which I've never read myself, but it's Mark Waid writing it, so I imagine it's okay.

Any suggestions? Even if only single issues from various series...maybe we can assmemble a Greatest Supergirl Stories Ever Told collection. In our minds!
Posted by Caleb at 2:22 PM

DC Comics Presents #28 (1980) featured Superman and Supergirl vs. Mongul and Warworld, written by Len Wein and drawn by Jim Starlin and Romeo Tanghal. Big action (Supes has a couple of "uh-oh" moments) and a chance for both Kryptonians to go all-out. It's reprinted in the Superman vs. Mongul paperback.

Way at the other end of the spectrum is the all-ages Supergirl: Cosmic Adventures in the Eighth Grade miniseries, by Landry Walker and Eric Jones. It's manic and fun.

I read a good bit of Supergirl in the '70s, because she starred in Superman Family. She also got a lot to do in the Phantom Zone miniseries (by Steve Gerber and Gene Colan).

Other than that, I read all of the Peter David-written series (drawn by Gary Frank and then Leonard Kirk), but I think DC has only collected the first and final arcs. Still, it does a decent job trying to build on the Matrix origin and introduce the Earth Angel element.

Supergirl: Cosmic Adventures in the 8th Grade is GREAT!

I liked Peter David's run on Supergirl, but it's been a few years, so I don't know how it's aged.

It might be too tired to the New Krypton stuff, bit I enjoyed Sterling Gates' run.

The Peter David Supergirl was outstanding. I have every issue. Even the Ed Benes artwork in later issues couldn't ruin it (though this was before Benes became really terrible).

I am agog at the idea of Vartox being a part of this show.

I would definitely vouch for the Sterling Gates/Jamal Igle run as well, it was a very relatable take on Supergirl that was basically what any solid Spider-Man run or like the current Ms. Marvel run would be doing. Plus it's been collected into still available trade paperbacks!

The New 52 Supergirl started out alright (the plot wasn't anything special, but it was fun for fans of the character), but fell off a cliff as soon as it got dragged into the horrendous "H'El on Earth" crossover.

The first two volumes might be worth checking out, especially because of the lovely Mahmud Asrar art.

Words Seem Out of Place said...

The most recent Supergirl run, from K. Perkins, Mike Johnson, with art by Emanuela Lupacchino, was fun, I thought. I think it's called the Crucible arc. Now, this is coming from someone who's only read the character in other books throughout the years, so I have no point of comparison to her previous titles and volumes, but I thoroughly enjoyed this arc. The big draw for me was the art by Lupacchino; I think she's outstanding. So if you enjoy good superhero art and a cosmic story (plus a Harry Potter-esque school for super powered youth), you (or your friend) might dig this one.

Very cute and very fun All Ages Supergirl title. It came out the same time as the awful Jeph Loeb relaunch of the character; the two were like night and day.

Super girl and the legion by Waid is boring as hell. It's all legion nonsense. Total snoozefest