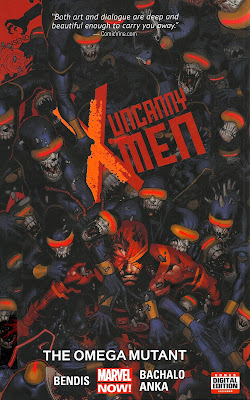 This volume collects Uncanny X-Men #26-31, and if it's not the climax of Brian Michael Bendis' run on the title and the X-Men franchise in general, it's at least a major turning point, as by the time the volume ends the two warring schools status quo has been altered into a more traditional one.

It picks up right where the previous volume ended: During the hologaphic delivery of Professor Charles Xavier's last will and testament, the late mutant leader revealed that he's been keeping the most powerful mutant of all-time secret from everyone, including that mutant himself, by regularly mind-wiping him so that he doesn't realize his vast, destructive powers over time and space. Of course, if Xavier's dead, then it falls to his former students to deal once and for all with one Matthew Malloy, the omega level mutant who just disintegrated several city blocks by freaking out a little.

After some more quibbling amongst themselves, eventually Storm, Wolverine, Rachel and Cyclops get on a plane to meet with Malloy, with Beast consulting ("And--And he's more than an omega level mutant. He's more powerful than any mutant signature we've ever seen before.") Malloy turns out to be more powerful than expected, having telepathic and telekinetic powers as well. When a SHIELD helicarrier carrying the X-Men get near him, he brings it down and teleports the X-Men back to their respective schools.

Meanwhile, the junior X-Men at the New Xavier School (i.e. Cyclops' team) start to question what on Earth they're training for exactly, and Tempus decides on her own radical course of action for dealing with Malloy.

So too does Cyclops. With Magik and, later, Magneto, he attempts to talk Malloy down, essentially trying to recruit him to his cause (looked at one way), although, to be fair, looked at Cyclops' way, Cyke does have a lot of experience dealing with out-of-control, reality-warping mutants who can barely control their own powers.

As for Tempus, she just goes back in time to tell the still-alive Professor X that he needs to come up with a better plan for dealing with Malloy.

It ultimately goes sideways in the present, with Scott, Magik, Emma Frost and, a few pages later, what looks like the rest of the X-Men all being killed by either SHIELD's attack on Malloy or Malloy's powers reacting to threats against him.

Luckily, Tempus and Professor X did find a work around, with Xavier preventing Malloy's parents from ever meeting, which thus prevented him from ever being born. Meditate on the ethics of that cosmic, retroactive pre-abortion!

With the timeline re-set–an awfully weird device for Bendis to employ, really, considering how much the idea that "time is broken" has played into his recent writing, from Age of Ultron to All-New X-Men–so that Malloy never existed, the reading of the will goes quite differently, and essentially a few issues of Uncanny never happened, so far as any of the characters involved save Tempus know. She lets Cyclops know what happened though, in the midst of telling him off and dropping out of his school. Which he then dissolves anyway, without consulting even his fellow teachers.

His last words (this trade) to the assembled X-Men kind of choked me up a little, to be honest, although otherwise Bendis' strongest writing in this particular volume has been in the jokes and clever exchanges department.

So where are we now? The Jean Grey School is the only X-Men school, meaning Cyclops' students and, presumably, his fellow teachers will be absorbed into Storm's school. Cyclops isn't exactly sure what he's going to do next, but he's had a lot to think about. Iceman is extremely angry with Cyclops, up to the point that he seems to be considering killing him. And Beast is in complete despair in terms of the X-Men's place in the world, as no one responded to his plea for help–although his plea was erased form the timeline by Tempus' actions, so maybe he's cool now.

Look at these panels:
I've talked at length about the lame way that Bendis uses swearing in his Marvel comics before, essentially writing in swear words just to censor them with grawlixes, so that anyone who has heard a swear word before (meaning anyone who can read) will be able to fill in the blanks, while Bendis and Marvel look juvenile, over-sensitive and just plain weird by swearing without swearing.

I've also noted that the symbols in the grawlixes he uses don't generally match up, so that instead of using four symbols in a phrase like "Fuck you!" he'll use five or six, so it will look like "@#$%^ you!," leaving one wondering if there's a one symbol-to-one letter correlation and, if so, what weird-ass swearing his haracters are employing. If it's spelled "@#$%^ you!" is it not, in fact, "Fuck you!" but, let's see..."Bitch you!" or "Shits you!" or "Cocks you!" or...I don't know.

Anyway, the swear words that Wolverine and Cyclops use in the above passage would, most logically, be "shit." As in, "All our shit aside, Logan." But there aren't four symbols; there are seven. What swear word has seven letters?

"Asshole," of course. But it doesn't really fit, does it? "All our asshole aside, Logan. He lied to us." "Our asshole not aside."

No, it doesn't work. So I'm assuming the word they're using is "fuckery."

"Xavier lied to all of us. All our fuckery aside, Logan. He lied to us."

"Our fuckery not aside."

Also, I really enjoyed Iceman's dig in that third panel.

Speaking of Iceman, he also gets my second favorite line in this book:

The "I've have" mistake (typo?) ruins that great line a little bit.

At a glance, the swearing read like "All our bullshit aside..."

I break my legs not swearing on my blog, since I usually swear like I'm going to get a prize for it.

Huh. I didn't even notice that typo for some reason, despite reading that page a few times, and scanning and cropping that image. Weird it's in the trade, too, as if it were in the original comic, they had an opportunity to correct it before reprinting it. Maybe they'll fix it for the softcover...

Yes, "bullshit" works better than "shit," but has one letter too many, assuming the one symbol = one letter of swearing-in-comics formula I assume.

The fixing — or failure to — of typos and other errors in trades. This is not isolated. Seems a real basic kind of, "we care about this being right," kind of thing.