By my count, Marvel plans to publish 79 comic book-format books this August, if you include the issues of books that will double-ship that month, like Guardains Team-Up and Star Wars: Lando. Of those 79 comics, 62 of them will be Secret Wars tie-in, including Secret Wars #6 and the various titles dealing with the events of Secret Wars, whether or not their solicitation ends with the words "SECRET WARS SERIES" or not (like Ms. Marvel and Magneto, for example).

That seems like an awful lot of comics, although, to be fair, the tie-ins seem set up in such a way that few if any of them are at all necessary to the plot of Secret Wars, and are instead more an exercise in in the creators from Marvel's surprisingly deep bench (plus some outsiders) taking a fairly unique opportunity to play with the characters and concepts of the Marvel Universe in ways they wouldn't normally be able to.

Most of the books look like they will be somewhere between mildly interesting and totally awesome, although I should also note that they are all $3.99 (or more) a pop–only Ms. Marvel and the two books based on Marvel cartoons are still at the once-standard $2.99 price point. Looking at these then fills me with anxiety then, as I'm really rather interested in reading a lot of them, but I'm not sure how I'll be able to do so.

Certainly many of the Secret Wars tie-in series will be long and distinct enough that they will almost certainly be collected on their own, like Thors, Weirdworld or Where Monsters Dwell. Those I can buy in trade or find easily at a library.

But what about something like, say, this month's Howard The Human, a one-shot? I'm assuming it will end up being collected with similar humorous one-shots, like this month's Hank Johnson, Agent of Hydra, which I am not interested in reading. I suppose I could just borrow that eventual trade from the library and read the parts I want, but hoo boy, is that going to be hard to find, as by that point there should be dozens of books with the words "Secret Wars" somewhere in their title and, if past Marvel events are any indication, several books will have almost identical titles, and every library tends to catalog titles their own way.

I'm considering quitting my day job at a local library and applying for a job at a local comic shop, just so I can read all of these damn things for free while I'm "working" just to keep up.

I was also curious to see which books were not tying in to Secret Wars in any way, shape or form. Spider-Man, The X-Men, The Avengers...most of Marvel's biggest and most reliable franchises are being sucked into Secret Wars completely, while the books shipping in August that have nothing to do with it include those on the fringes, like All-New Hawkeye, Unbeatable Squirrel Girl and some Guardians of The Galaxy-related books.

Finally, if you've read through all of Marvel's August solicitations–which you can do here, you'll notice that, like DC Comics, they too will have a theme for their variant covers for the month (aside from "a lot," of course, which is their regular, ongoing theme for every month). Many of those solicitations include the words "MANGA ARTIST VARIANT COVER BY TBA."

Assuming TBA is an acronym for To Be Announced and not the name of a particular manga studio, then it would appear that Marvel plans to have manga artists draw a bunch of covers for their books that are shipping in three months, they just haven't lined-up which artists yet.

At least, I'm assuming from the phrasing that they will be hiring actual manga artists, rather than having American artists draw in manga style, otherwise I'm assuming it would say "MANGA VARIANT COVER BY TBA."

Anyway, because Secret Wars continues to so dominate Marvel's output, there's not a whole lot to say about this crop of books, other than "Huh, that looks weird," but let's take a look anyway, shall we...?

Well this looks kinda dumb. While I like those issues that are included that I've read a whole lot–Ms. Marvel #1 and She-Hulk #1–and the idea of a sort of sampler of comics starring Marvel heroines sounds solid in theory, I don't really see how this will fly.

Based on the page-count, price-point and the fact that it has an ISBN, I'm assuming this will be a trade paperback format book with a spine, something you'd find on the shelves of a book store or a library (and with the trades at a comic shop), rather than on a comic rack somewhere (They still have those here and there, right? I know I've seen comics racked with magazines at Barnes and Noble, at least).

But say you invest $15 in it, and you like a couple of the books, like perhaps you liked Ms. Marvel #1 and She-Hulk #1 as much as I did, enough to decide you want to follow those series. Well, then you'd by the first volume of those trades, and you'd be re-buying chapters you've already bought and owned (Unless you're just using your library to get trades, in which case never mind). If you're going to gamble $15 in the hopes of finding a series you'll like, why not just start with Ms. Marvel Vol. 1...? If you like somewhere between one and all of these issues, it's going to be something of a waste to buy this trade. And if you don't like any of them, well, that's also a waste. (A money-losing $3, comic book-format collection of three of those titles might have been a better bet).

There's an excellent chance that I have no idea what I'm talking about, of course. Maybe this will prove to be the American equivalent of those phonebook-sized manga anthology periodicals they put out in Japan, and everyone will buy the hell out of it.

I also kind of hate the name, and I'm not sure why they picked it. "A-Force" is, of course, the name of the all-lady Avengers team in one of the Secret Wars tie-ins. You've probably heard of it. It was in The New York Times and everything. It's a dumb name, even in the context of its own book, but it has absolutely nothing to do with the contents of this book, save for the fact that some of the characters appearing in this also appear in A-Force. Why you'd want to drag Secret Wars continuity baggage into a trade seemingly aimed at brand-new readers, however, I don't know. Perhaps Marvel thought the "A-Force" name would boost the marketability, given the media coverage of Secret Wars during the time the volume would be released. Even still, it has a built-in expiration date, as A-Force, like everything else tied to Secret Wars, is a temporary state of affairs.

That said, I'm afraid I can't think of a better name. It beats Girl Comics, I suppose. 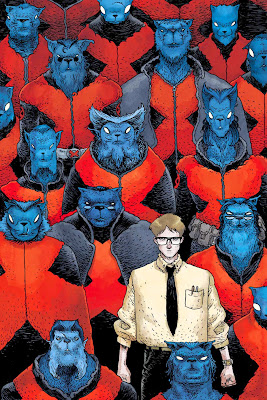 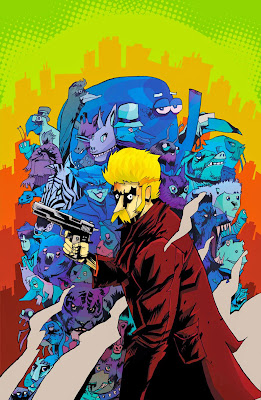 HOWARD THE HUMAN #1
SKOTTIE YOUNG (w) • JIM MAHFOOD (a)
Cover by JIM MAHFOOD
VARIANT COVER BY TBA
• Spend a day with Howard, a private investigator and the only human living in city full of animals. But not, like, criminals and lowlifes. We’re talking elephants, apes, ducks and kitty cats. Catching a case, grinding a few gears, dodging some bullets and almost getting killed by an anthropomorchic monstrosity. It’s just another Monday for Howard the Human brought to you by Skottie Young (ROCKET RACCOON) and Jim Mahfood (MIAMI VICE REMIX).
32 PGS./ONE SHOT/Rated T+ …$3.99

Well, this is a funny title, although it seems like the kind of gag in which the title is the entire joke (kind of like the way headlines at The Onion are generally sufficient, and one need not read the article itself). That said, it's Young and Mahfood, so if there is more to the gag, it's a pretty sure bet those two can find it. If nothing else, you've got at least 20-pages of Mahfood drawing animals.


KANAN - THE LAST PADAWAN #5
GREG WEISMAN (W) • PEPE LARRAZ (A)
Cover by MARK BROOKS
• Caleb has been captured by Clone Troopers Grey & Styles!
• Can he turn his back on his Jedi training completely?
• The final chapter of the secret origin of Star Wars Rebels’ Kanan Jarrus!
32 PGS./Rated T …$3.99
Star Wars © Lucasfilm Ltd. & TM. All rights reserved. Used under authorization. Text and illustrations for Star Wars are © 2015 Lucasfilm Ltd. 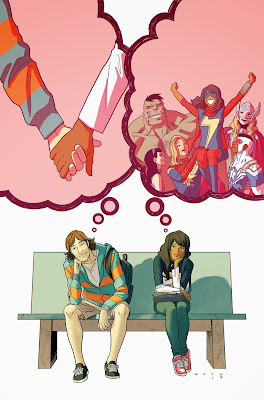 I like this Ms. Marvel cover by the ever reliable Kris Anka. That is all. 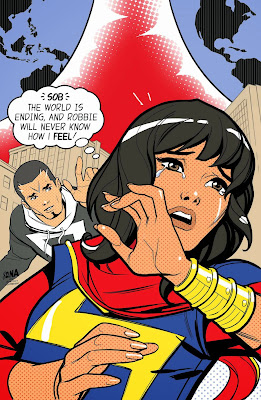 Well, I count about a half-dozen creators I really like, and two of my favorite newer Marvel characters on the cover, so this looks good. Now I wonder where it will end up being collected... 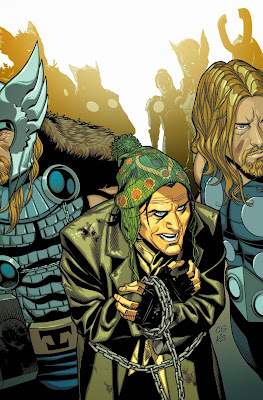 THORS #3
JASON AARON (w) • CHRIS SPROUSE & GORAN SUDZUKA (A)
Cover BY CHRIS SPROUSE
VARIANT COVER BY DALE KEOWN
MANGA ARTIST VARIANT COVER BY TBA
• After a series of brutal and mysterious murders, the Thors have finally brought in a suspect for questioning -- Loki!
• But how does one get the truth from the Prince of Lies?
• The Ultimate Thor is about to find out…
32 PGS./Rated T+ …$3.99
*SECRET WARS SERIES

The problem with a police force composed entirely out of Thors is that they'll always be bringing Loki in for questioning, wont' they? 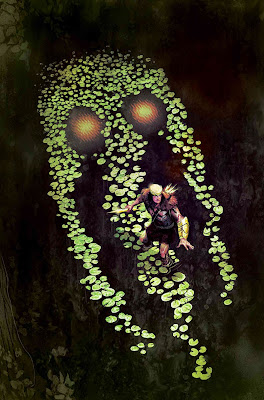 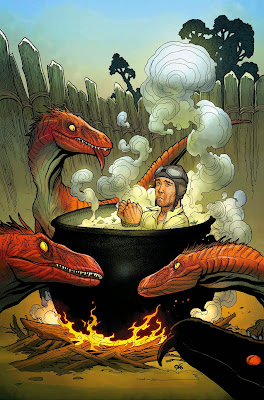 Over the years, I have seen many images of white men cooking in stew pots. And I have seen many images of dinosaurs hungrily eyeing human beings. But I don't think I've ever seen both things in the same image before. So way to go Frank Cho. This is, by the way, the cover for August's issue of Where Monsters Dwell, the Garth Ennis/Russell Braun series in which The Phantom Eagle fights dinosaurs. 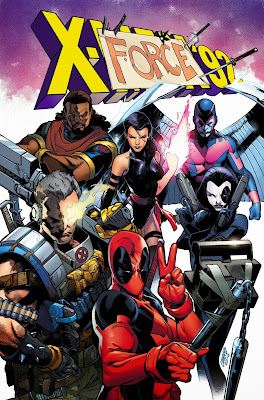 Check out Pepe Larraz's cover for X-Men '92 #3, a series I hope against hope will continuing publishing until it reaches 100 issues, just because I will enjoy typing X-Men '92 #92 someday. Now I'm not generally a fan of Deadpool and his antics, but is that Deadpool inventing the selife decades early with a nunchuck-mounted Polaroid camera...? Okay, bravo Deadpool.
Posted by Caleb at 3:57 AM

I'm considering quitting my day job at a local library and applying for a job at a local comic shop, just so I can read all of these damn things for free while I'm "working" just to keep up.

You'd think, but from personal experience, you spend so much time keeping up with stocking and selling comics, and dealing with Diamond's disasters, you're going to have to turn to blogs like this one to even know what's going on in the comics on the shelves.