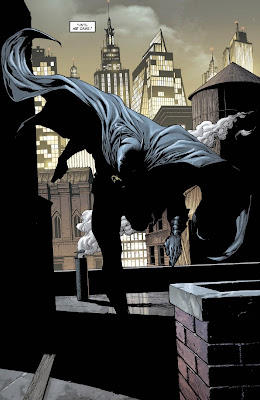 This week at Robot 6 I reviewed Batman: Earth One Volume Two. I did not like the first volume, like, at all, but found this one to be a great improvement. It was one of those books where I plan on reading a portion of it before turning in for the night, and then end up reading the whole damn thing because I find the plot engaging enough that I can't put it down.

It's basically Geoff Johns and Gary Frank's version of "Batman: Year One," only with a higher page count (between the first two volumes, they've gotta be closing in on 400 pages by now), and in this one much of Batman's energy is focused on fighting this new villain called The Riddler (So, perhaps unfortunately for Johns and Frank, their new book is practically begging to be compared to Scott Snyder, Greg Capullo and company's "Zero Year" arc).

I got really excited when The Riddler first-appeared, in this panel: 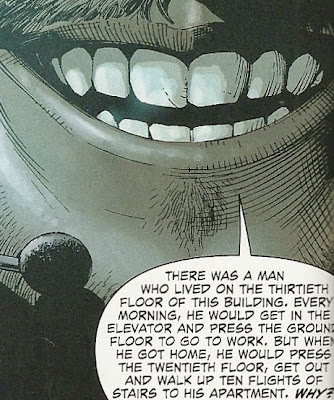 They keep him off-panel for a long time, and that is the first look at any part of him. For a while I thought they might be giving us a mustachioed Riddler, which means a John Astin-style Riddler, which means awesome. Sadly, that was not the case. This Riddler is just unshaven, rather than sporting a handsome mustache.

There were two scenes that more than made up for my disappointment in that matter, however. The first involves Alfred, who here is basically the Alfred from Beware The Batman, but with a goatee, telling Bruce Wayne that he needs to start wearing body armor. Bruce glibly responds, "Do you know what body armor says about a guy? It says he needs body armor."

Nicely put, Batman, and I couldn't agree more. I hate, hate, hate the over-armored look of Batman that seems so predominate these days, from the suits Christian Bale wore in the last cycle of Batman films, to that of the Batman in the various Arkham video games, to The New 52 costume. Frank's design actually looks a little more armored than my ideal Batman costume–what with all the seams and what I guess are actually pads, rather than plates–but I do like the sentiment that Batman doesn't need armor, because he's so good he's not going to be shot and stabbed constantly. I'm cool with some thing armor covering his torso under his shirt to block unexpected gunfire, and maybe a reinforced cowl, but I don't like the idea of a bullet proof Batman–Bale's Batman wearing what looks like 80 pounds of armor and still having his ninja-like ability to appear and disappear just snapped my suspension of disbelief. For superhero costume design, simpler is always better, if you ask me.

The last panel on this page was my favorite bit though: 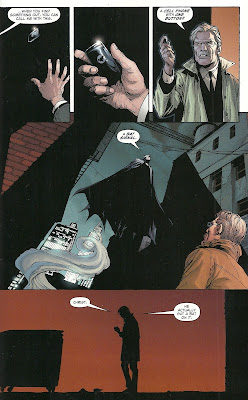 I love the idea of Batman as a guy who's just really, really into bats, and putting bat-symbols on absolutely everyting, like some sort of obsessive-compulsive branding exercise. Just as much as I like the idea that everyone else thinks it's a weird quirk of his, and just don't agree that putting bat symbols on everything is, like, the coolest thing ever.
Posted by Caleb at 5:14 AM

I agree that some versions of Batman seem to wear a ludicrous amount of armor, but it's pretty silly to think he'd wear none. "Arkham City" takes it to an outrageous extreme; he looks more like Dr. Doom than Batman in that.
But the other extreme is just as comical. The Alex Ross version looks like a chunky cosplayer in a body stocking. I don't care how skilled of a martial artist/acrobat you may be, when everyone you fight is shooting at you with automatic weapons there's only so long you're going to last.
I'd settle for armored gauntlets, boots, chest and head, with the rest a bodysuit that looks smooth but is made of some really tough material that's resistant to knives. "Totally bulletproof Batman" is wrong, but "guy wearing nothing but tights Batman" is just as wrong.