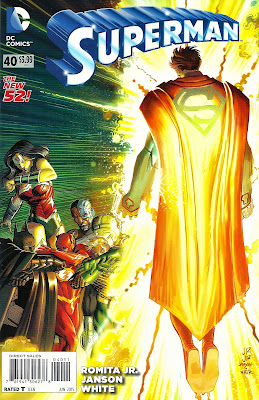 I read Superman #40 quite by accident, as I planned to start reading the title when new writer Gene Yuen Lang took over from exiting writer Geoff Johns. I had added the book to my pull-list earlier this month, while Convergence and its tie-ins were taking the place of DC's regular New 52/DCU line of comics, but I guess this last issue shipped late, and therefore ended up in my pull-box.

I'm glad I got it though, and I'm glad I read it. It was great fun, and the fact that it was completely unexpected made it even more so. Long-time Marvel artist John Romita Jr. has been drawing Superman while Johns has been writing it, and he's staying on as the title's artist when Lang's run officially begins with issue #41. This issue, which Romita himself wrote, is therefore a sort of bridge between the two.

The plot picks up on what I imagine was a rather major plot-point in the previous few issues–Superman's new "solar flare" power, where he essentially releases all of the solar energy his cells have stored up in one big, devastating blast–a rather arcade logic application of a super-power, really–at the cost of all of his powers for a period of time afterwards, while his cells recharge.

There was certainly an element of the stunt about the new power, although in rather typical Johns fashion, it was explained and presented in a way that made logical sense, given what had come before. Sure, it was new, but it felt and feels organically in-world.

In Romita's done-in-one story "Powerless," which he pencils as well as writes, with Klaus Janson inking and Dean WHite coloring, as per usual, Superman turns to his friends in The Justice League to help him test his new power.

I actually first noticed that Romita was writing as well as drawing when I hit pages three and four. On the third page, Batman picks up a naked Superman on a remote mountain top–the solar flare disintegrates Superman's uniform–while cracking a series of jokes from the cockpit of his Batplane. On the fourth page, the pair are on the Justice League satellite, where they've been joined by New 52 League founders Wonder Woman (wearing a robe over her costume), Aquaman, The Flash and Cyborg. Superman leans casually up against a chunk of mechanical stuff, while Batman looks more casual still, sitting with his legs crossed at the ankles, his cape off, and sipping a beverage while smiling widely. 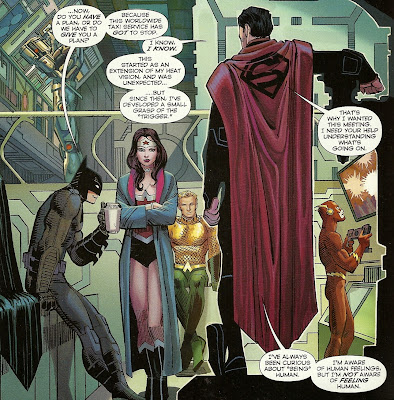 These guys seem awfully happy and comfortable, even natural, I thought to myself, then flipped back to page one to see who was writing it. That's when I saw that it wasn't Johns, who has been writing Superman, as well as almost every single appearance of the Justice League I've read since the 2011 continuity reboot.

The League decide to help put Superman through his paces, to see to what degree his powers have returned after 4 hours, and this involves a battery of tests, like Batman and Cyborg shooting laser guns at Superman ("This is a recreational sector!" Superman complains, while the smiling Batman responds, "Well, we think this is recreational!" while blasting away at his friend...I kind of love Romita's happy Bat; is he fast enough to draw Superman while writing and drawing Detective Comics? Because I want to read more of his Batman).

Eventually they take him down to the "basement" of their satellite for a "controlled" solar flare test, and he is once again naked. I think this is maybe my favorite Justice League page since the relaunch: 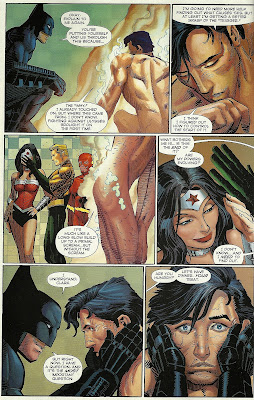 For the first four panels, Romita has Superman and Batman talking about super-business, but check out Aquaman playfully covering Wonder Woman's eyes so she can't see naked Superman, and her brushing his big, green gloved hand aside to check out Superman's butt.

And those last two panels, with Smiling Batman putting his hands on Superman's face like that, and telling the reporter that he has to buy everyone dinner. Bruce Wayne, you're a billionaire! You should always be treating everyone!

That is immediately followed by a sequence that is every bit as fun, with everyone but Cyborg putting on street clothes to have a few beers together at a Metropolis tavern. I can't really remember the last time I've seen the Justice League just kind of...hanging out, perhaps in large part because I came in when Grant MO\orrison was writing JLA, and he tended to portray them solely as remote, god-like figures. When the League has just hung out, it's tended to be the Leagues that have had more minor characters. For years, decades even, Batman and Aquaman haven't really been the sort to socialize with their peers, let alone put on street clothes to drink beers with them. 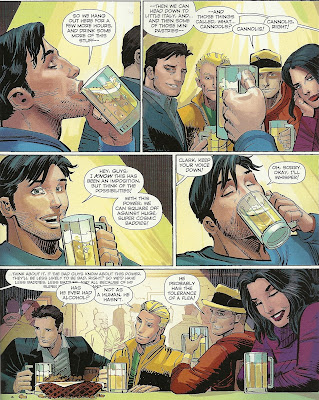 White does that thing I hate that I've seen in the CW superhero shows, in which the characters dress in street clothes the same color as their costumes (something I've always associated with the Power Rangers, which was, of course, targeted at little kids who needed the context clues), and I really hate Barry Allen's dumb hat (especially in yellow, but this was an all around fun scene.

When Clark starts talking too loud and running on, the others remark on the fact that he's apparently gotten drunk off just a few ounces of light beer–in addition to his super-powers, he's temporarily lost his Kryptonian constitution, of course–the night seems to end early.

He awakes next to his bed, wearing one sock, the next morning, only to find he's late for some Supermanning, and the book ends with a seven-page Superman sequence.

He sustains an injury as Superman–he went into action before his powers were fully recovered–and Lois notices that Clark Kent has a bandage right where Superman was injured, apparently putting together that they are one and the same (as seen in the Divergence Free Comic Book Day offering).

In that regard, I suppose this will prove to be an "important" book in terms of Superman's status quo in the months ahead, but what I found most important was the fact that it was a light, fun superhero story featuring a bunch of characters I like, apparently enjoying themselves and one another's company. When the beer first starts to go to his head, Clark announces "Hey, this is great! I love you guys!"

The way Romita writes and draws them, I have to agree. This is great; I love those guys.
Posted by Caleb at 7:01 PM

When I read that it takes a "day" for Superman's powers to come back I immediately wondered if he could get his powers back faster by using the Justice teleporters to go to the day side of the Earth when it's night in Metropolis. That way he'd be exposed to sunlight for longer.

I'm sure some writer will explore that eventually.

Egad! This sounds like fun! I may have to pick it up after all.