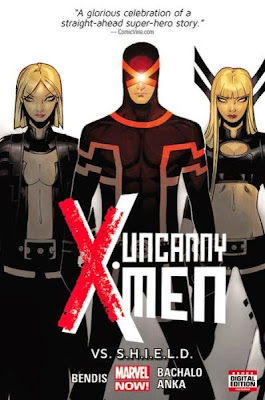 With the issues collected in this volume–Uncanny X-Men #19-25–writer Brian Michael Bendis seems to be winding down his run on the X-Men franchise, or at least this track of his run on the franchise, as this is the book that features Cyclops Scott Summers and his allies and students at the New Xavier School (The other, of course, is All-New X-Men, the one featuring the original, teenage X-Men from the past, transported to the future). The first half of the collection features the conclusion of a few of the plotlines that Bendis has kept simmering throughout his time on Uncanny, occasionally bringing them to the fore, sometimes moving them to the background.

The first, as the the subtitle so obviously alludes to, is SHIELD's conflict with Cyclops' X-Men, which, for all intents and purposes, are the "bad" X-Men of the post-Avengers Vs. X-Men status quo, with Wolverine, Storm, Beast and the others at the Jean Grey School being the "good" X-Men, the ones that the public fear and hate less, the ones that work with the Avengers, the ones that SHIELD isn't at war with.

The other is the resolution of the plotline involving Mystique and Dazzler, Agent of SHIELD. Maria Hill had appointed Dazzler her official mutant liaison, but unbeknowest to her, the real Dazzler has been kept in a coma-like state in Madripoor, being regularly harvested of fluids to produce the drug Mutant Growth Hormone, while Mystique impersonates her, helping to stoke tensions between SHIELD and Cyclops' X-Men.

Almost every time Cyclops, Emma Frost, Magik and the others find a new mutant and seek to recruit them, they are attacked by highly-advanced versions of the Sentinel robots, and all of the clues as to who has been siccing the new killer robots on the X-Men have always pointed to it being SHIELD. Hill denied it, but Cyclops didn't exactly trust her, as she was highly devoted to hunting him down.

All this time, since nearly the beginning of the title, we've seen that the mastermind behind the Sentinel attacks was someone located within a SHIELD helicarrier, someone wearing a completely impenetrable disguise with a mirrored helmet. 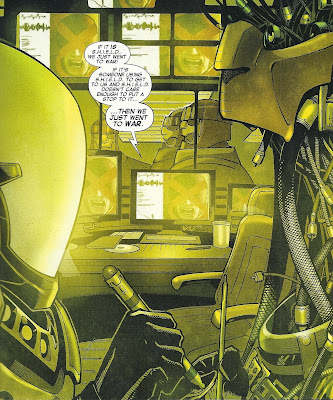 He, she or it was always alone, of course; the disguise was simply for this antagonist's identity to be kept from the reader (I'm not entirely sure they played fair, either, as the body shape should have been...different in all those other glimpses, but I'm not going to cry foul or anything; unlike Batman Eternal, Uncanny X-Men wasn't presented as a mystery, although, like that Batman series, this reveal comes out of left field, being a practically random X-Men villain who hasn't shown up in the series previously).

After the latest attack by SHIED Sentinels, Cyclops, Emma and the others get serious about trying to figure out who is doing this and why, and they eventually realize it must be someone who knows how to work a cerebro, which limits the suspect list pretty dramatically; so Cyke and Magik go to confront Hank McCoy (grown-up version) at the Jean Grey school (Hey, have you figured out the mystery villain yet, just from reading my review?). It's not him, of course, but it gets Cyclops and Magik to the Jean Grey School, just in time for SHIELD to show up to arrest him, with Mystique-as-Dazzler in tow, as well as actual Dazzler (who Magneto just got done rescuing), and so everyone's in the same place at the same time for a series of dramatic confrontations and reveals, including another attack by the SHIELD Sentinels and the threat of nuclear attack from the helicarriers parked right above the school.

I hope it's not spoiling anything to say that the good guys win and the bad guy loses?

Despite all of the distractions and side-trips that he's induged in over the course of the first year and a half or so worth of issues, the four-issue climax of these plots is actually really well done.

The last three issues of the collection kick off a storyline that will continue into the next volume, this one partially drawn by Kris Anka (Chris Bachalo, who draws the four-issues constituting the climax of the SHIELD conflict, also draws the final issue contained herein; they both do their regular excellent job).

She-Hulk Jennifer Walters, in her capacity as the late Charles Xavier's lawyer (well, it had to be either her or Daredevil), bounds to the Jean Grey school and has the original X-Men go get Cyclops (turns out Beast knew where their secret base was all along) for the reading of Xavier's last will and testament.

This is, naturally, a rather intense moment, since a large part of the reason there's so much animosity between Cyclops and his former teammates is the fact that Cyclops killed Xavier (while possessed by The Phoenix Force, probably, although there's some disagreement among the X-Men about all of that). Also, everyone's pretty sure that Xavier left the school grounds and all of his assets to his once prize pupil Cyclops, and Xavier didn't have time to change his will between the time Cylcops started killing him and the time he finished killing him at the climax of Avengers Vs. X-Men.

But before the will can be read, She-Hulk has to play a recorded hologram message from Chuck, and in it he says he's about to reveal his darkest secret! And man, that guy has had some dark secrets. We are then introduced to an incredibly powerful mutant as a little boy, one so powerful that he can basically do anything, with "doing anything" mostly consisting of inadvertently killing anyone around him and, as he grew older, anything around him for miles, simply by being stressed out.

He's one of, if not the, most powerful mutants who ever lived and, unable to find a way to help him, Charles Xavier basically wiped his mind, and kept tabs on him, regularly showing up to do mind-maintenance on the guy. And now that Xavier's dead, the poor schmuck's staggeringly destructive powers will return, and Xavier won't be there to stop them from being unleashed. His last wish is for the X-Men to find the young mutant, now a grown man, and help him as Xavier himself could never figure out how to do.

Meanwhile, he's evaporating city blocks, and SHIELD is trying to get through to him, while the X-Men bicker.

This is an interesting premise, even if it is a bit eye-rolling that writers are constantly finding new deep dark secrets from Xavier's past to wring stories out of. In these issues at least, it gives Bendis a good excuse to get the leaders of the two X-Men factions in the same place at the same time (Wolverine shows up in this section as well), and to have them trade barbs and explore one another's hurt feelings in various ways. It's all very soap opera, but in a good way–The X-Men really excel at superhero soap opera that is melodramatic without being unreadable in a way that no other super-team does.

One thing I didn't like? Dazzler, who has just gone through a pretty terrible trauma, taking to the bathroom, looking at herself in the mirror, then noticing a pair of scissors. 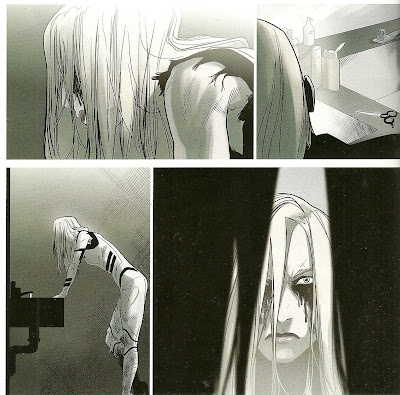 What's the best way to get over a trauma? 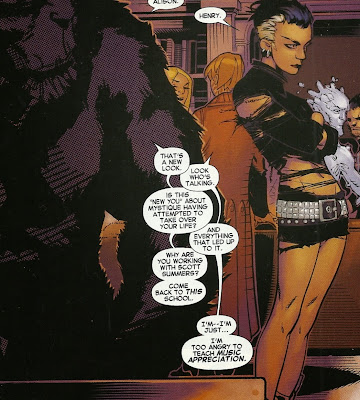 She actually looks an awful lot like her Ultimate counterpart, here. The entire scene is a little cliche, and I feel uncomfortable with the implication that people who wear certain kinds of clothes or make certain kinds of fashion choices do so out of a desire to hurt themselves or to process incredibly painful memories and events. Why can't Dazzler just get a new hairstyle? Why did she have to spend weeks or months in a coma having her hormones harvested by addict mutants while a shape-shifting villain stole her identity to decide she'd rather be more emo than disco in 2014?

Actually, there are two things I didn't like. This collection includes all the many variant covers, including an "animal variant" from the month when Marvel had various variants on all their books, depicting their heroes as animals. Giuseppe Camuncoli decided to draw them as...well, hell, sexy Furry fantasy characters, I guess...? 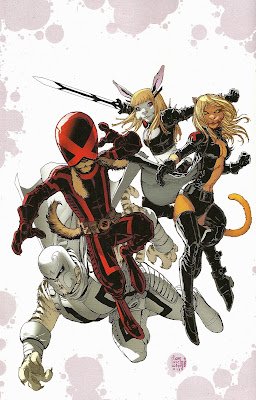 Man, comics are so fucking weird.
Posted by Caleb at 8:15 PM

So...who was it behind the mask at SHIELD anyway?

Words Seem Out of Place said...

"The X-Men really excel at superhero soap opera that is melodramatic without being unreadable in a way that no other super-team does." Well said, Caleb! I've thought that about X-Men comics for ages but had never quite put it into words before. It's one of the reason I'm addicted to their books, no matter how silly it gets, it's always incredibly readable.

I just started reading this run of Uncanny along with All-New X-Men on the Marvel Unlimited App, so I'm not quite up to this part yet. I have to say I'd heard a lot of good and bad things about Bendis's run (the man is nothing if not polarizing) and so far I've quite enjoyed both books. Still, while I enjoy the interplay between characters and the issue-specific fights and battles, I tend to realize after blowing through a chunk of issues that...nothing...has...really...happened! But, that's modern comics, really. Still, it's been keeping my attention, and I've loved Bachalo's art on Uncanny, but I love his art, period.