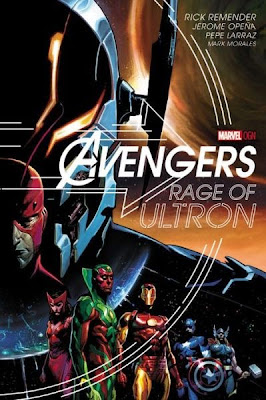 Avengers: Rage of Ultron is, by my count, the fourth in Marvel’s new-ish series of original graphic novels, and the third that I’ve read.

Its timing and its title are both reflective of the publisher’s desire to have a book on the stands ready and waiting for anyone curious about the characters and interested in spending money on comics featuring them after seeing Avengers: Age of Ultron. That likely also explains the Avengers line-up drawn on the cover; while all of those characters along the bottom do appear in the book, only The Vision plays a major role. The others? Confined to a 23-page an opening scene set “Years Ago,” while the rest of the book is set “Today.”

It’s not a bad idea, really. Marvel doesn’t have anything that resembles the movie Avengers too closely in print, and the Age of Ultron series that the film took its sub-title from has more in common with the Terminator franchise than the Avengers films. And this book, written by Rick Remender and drawn by Jerome Opena, Pepe Larraz and Mark Morales, is certainly competently made. As a regular reader, if not exactly a fan of or expert on, any of these characters or creators, I found the book engaging and enjoyable.

I wonder how new-reader friendly it actually is, though. Of the two Marvel OGNs I’ve previously read, Avengers: Endless Wartime and X-Men: No More Humans, this hews a lot closer to the latter than the former, in terms of how confident Remender is that readers will be up-to-date on the week-to-week goings-on of the Marvel Universe.

I, for example, knew enough that I could easily make heads and tails of many of the changes that took place between “Years Ago” and “Today” in the Avengers: Former Falcon Sam Wilson is now Captain America, Thor is now a woman, Sabretooth is an Avenger and Hank Pym is back to using the name “Giant-Man” while dressed in a costume that makes him look like a big red ant.

But I still had no idea who the hell “The Descendents” were, although they appear to be robots of some sort that look extremely human, right down to the fact that the one codenamed “Fater” looked old and had wrinkly flesh. They all had odd names that made them sound like millennial superheroes: The Urn, The Swine, The Origins and The Ideal.

Oh, and Starfox is in this too…so, if you are picking this up on a whim after seeing Age of Ultron, maybe you want to read it near a computer with  its browser aimed at Wikipedia…?

There’s a nice introduction by Kurt Busiek, who remains one of the better writers to ever tackle The Avengers in my estimation, and it goes a long way towards explaining what makes Ultron such a great villain for the team, and an all-around appealing character (Me? I think it’s the jack o’lantern face, which was part of the reason I think the film’s design was a bit of a letdown). Perhaps inadvertently, Busiek also explains the tangled web of relationships involving Ultron and the various Avengers, most particularly his father Hank Pym and his son, The Vision. These relationships are quite important to the proceedings, although Remender doesn't devote much attention to making sure the reader knows much about them.

The story opens with an old-school line-up of Avengers fighting a more-or-less classic-looking Ultron, who is attacking New York City while trying to take control of America’s nuclear weapons to do his world destroying thing (I gotta admit, I really liked the homemade meteor idea from the movie; has any supervillain tried to create that precise extinction event in such a mannter before…?).

A geography-addled Captain America, Iron Man, Thor, Beast, Hawkeye, Scarlet Witch, Vision, Wasp and Hank Pym (then going by Yellowjacket) are The Avengers, and in a battle the length of a regular issue of a comic book, they manage to defeat Ultron….mostly thanks to Pym.

Then we pick up in modern times, and we find out where Ultron—or at least that version of Ultron—landed after Pym and company shot him into outerspace.

The current Avengers line-up? The Captain America Forrmerly Known As The Falcon, Thor (the lady version), The Wasp, Scarlet Witch, Quicksilver, Spider-Man, Sabretooth, The Vision in his latest ugly redesign and, of course, Pym.

Tensions are already high among The Avengers, as Pym and The Vision have been arguing about whether or not robots and various forms of artificial intelligence are really alive or not, and thus whether shutting them down is killing them or not. Pym does most of the narration in the book (although it opens with Ultron narrating before the narrators switch, oddly enough; I found myself reading Ultron’s narration in James Spader’s voice…that’s gonna stick with me for a while, I think).

There’s a lot of agonizing in Pym’s narration, and his interactions with The Vision, Ultron and his ex-wife The Wasp. It’s extremely melodramatic, to the point that it’s almost tedious.

As for the specific conflict driving the narrative, Ultron landed on Titan, home of Thanos (a no-show) and Starfox, which must be some kinda robot moon or something…? Or else it has the means for Ultron to turn into into a Cybertron-looking world, with his giant face on it. He moves it the many lightyears into Earth’s orbit pretty quickly, and then begins to assimilate people, as robotic lifeforms tend to do in TV, film and comic books, I guess.

Pym has the means for shutting Ultron down, the same robot-turner-off thing he used earlier and that The Avengers were not too happy about his using, as it “kills” robots, and so the team has to take on Ultron while trying to decide whether to simply “kill” Ultron with the device, or if they can figure out a way to stop him without resorting to kinda sorta lethal-ish force.

Remender, who has been writing the Avengers franchise’s C-Title for a while (Uncanny Avengers, a recent plotline from which recently took over much of Marvel’s publishing line for the event series Axis), does a fine job of using Jonathan Hickman-like stakes in the conflict.

The longer The Avengers wait to push the robot-killing button, the more time Ultron has to turn their teammates and innocent civilians into automatons, so that the potential death toll in the lose/lose scenario just gets worse and worse. Push it immediately, and dozens die. Wait a few minutes, hundreds die. Wait too long, millions die. Then billions.

Ultron gradually picks the Avengers line-up off, one-by-one, until it’s just Captain Falcmerica, Pym and The Vision debating on whether to kill him or try something riskier, with a weird, unexpected assist coming from Starfox, the love-powered Titan (A character, I almost said, who I don’t expect to ever see in a Marvel Studios movie…but then, a few years ago I would have said the same thing about The Vision and every single character in The Guardians of The Galaxy, so what do I know?)

In addition to being remarkably tied to the current status quo of the Marvel Universe, with no real effort put into introducing the characters and concepts to new readers, the book is seemingly quite relevant to the comics line…or at least as much as any coic book can be at this point, with a cosmic re-set button of some sort expected to arrive at the climax of Marvel’s current event series Secret Wars.

Ultron kinda sorta dies in a temporary way, and it takes the sacrifice of an Avenger to do it—the last page makes it perfectly clear that neither are dead, but the scene has the sort of finality that suggests Remender is officially putting two particular toys from the Avengers playset away for the foreseeable future.

The artwork is quite a bit rougher than in the other OGNs of the line. Opena has done a lot of work with Remender before, on the Uncanny X-Force title, and they work well together. Opena’s artwork tends to be dynamic and his characters expressive in an occasionally exaggerated way that fits the histrionics so many of the characters go through in this story.

That said, much of the action is confusing where it should be clear, as there’s only rarely a strong sense of where the various players are in relation to one another in the big battle scenes (Particularly in the “Then” team’s battle with Ultron). Several sequences I needed to re-read repeatedly until I could figure out what was happening, and it was usually the dialogue that explained it, not the imagery.

If you only read modern superhero comics, this probably isn’t even something you’ll notice, but man, if you jump back and forth from high-quality action manga to these sorts of decent-but-not-greate superhero comics, it’s glaring.

Opena and his collaborators are pretty weird with tears, too, and there were at least two scenes where the same image is used repeatedly in consecutive panels, manipulated to suggest a camera slowly zooming in on the subject. The effect is lost, however, because the bigger the art gets, the less distinct it looks, and the more its composite lines become visible, drawing attention to the fact that the art is being recycled.

Again, it’s not a sin, but it knocks a reader out of the moment, calling attention to the technique and making said reader question Opena’s motivations (If you’re already committed to drawing 112 pages, are those extra four panels really going to break your hand?).

It’s not perfect then, and maybe further away from perfect that it is close to it, but if one walks out of the theater wanting to read a comic book in which the Avengers fight Ultron, there aren’t exactly a lot of easy-to-find books that fit that particular bill. A reader could certainly do worse.

….Like Age of Ultron and Age of Ultron Companion or The Mighty Avengers Vol 1: The Ultron Imperative, for example. Marvel seems to have put out  some Ultron-specific collections to get ready for the movie,  like Avemgers: Ultron Unbound and while there are good comics in some of Marvel's recent collections with the word "Ultron" in the title, they're not exactly the ideal comics to hand a would-be comics reader who knows nothing about the medium, but liked what they saw on the silver screen, you know?
Posted by Caleb at 8:13 PM

I believe it's the fifth. There was: the Ellis Avengers one, the Spider-Man one, the first Starlin one, the X-Men one ("No More Humans"?), and then this with the second Starlin one coming out soon.