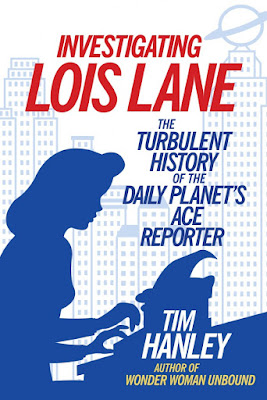 I interviewed Tim Hanley, author of Wonder Woman Unbound, about his new book, Investigating Lois Lane: The Turbulent History of The Daily Planet's Ace Reporter. It's a fascinating book about one of the most fascinating characters in pop culture, and I enjoyed having the opportunity to ask Hanley more about it and its subject matter.

Regarding his cryptic clues about who or what he might right about next, I'm going to guess Catwoman, as she's the most prominent female character in the Batman story, and Hanley's already covered Wonder Woman and Superman (through Lois), so Batman seems like the natural progression (Well that, and he did say something about a villainous perspective).

The other clues were a little more intriguing. When he mentioned legacies, I thought most immediately of Robin, who would present another avenue through which to discuss Batman's history in pop culture, but, if he sticks with the female comics characters, maybe we'll get a book about Supergirl (who is naturally discussed a bit in the Lois Lane book), her inspiration Mary Marvel and Batgirl.

I have no idea, really, but whatever Hanley writes next, I'll be interested in reading it.