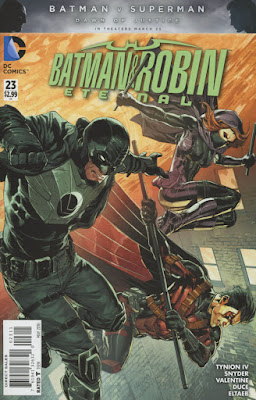 Batman & Robin Eternal #23 (DC Comics) Genevieve Valentine scripts and Christian Duce draws this issue, in which Team Robin gathers all their allies–including at least one rather unexpected one, in the form of StormWatch/The Authority's Batman analogue Midnighter–to try to stave off Mother's apocalyptic plan while Dick Grayson goes after her personally. It's nice to see some of these guest stars, particularly Spoiler and Cullen, both of whom were present at the beginning of the series and then disappeared for about 20 issues or so. 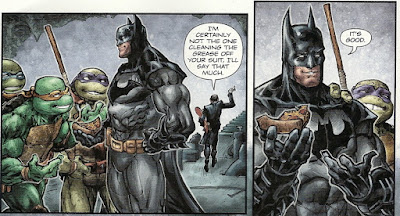 Batman/Teenage Mutant Ninja Turtles #4 (DC) In this issue, Michelangelo prevails upon Batman to eat a piece of pizza, and Batman does so...while wearing his gloves! Batman! You were just rolling around the floor sparring with Leonardo wearing those gloves! They're probably filthy with dirt and traces of guano from the bats that live in the stalactites in the roof of the Batcave. But, cleanliness aside, who wears gloves while they eat? Maybe Raphael was on to something when he pointed out that only a crazy person would drive a car shaped like he himself.

This issue seems to be a sort of deep breath before the climax of the six-issue series begins in earnest, with the heroes mostly engaged in down time while the plot advances slightly from the cliffhanger ending of last issue. Splinter, the Turtles, Batman and Alfred hang around Wayne Manor and the Batcave and Batman shares his origin story with Raphael (Hey, did you guys know his parents were murdered right in front of him when he was just a little boy, and that's why he decided to dress up like a bat to fight crime? It's true).

I must confess to being pretty surprised with the last page of this issue, and, especially, the next issue tag, which promises a direction for the series I would never have even imagined.

Freddie Williams' art continue to impress, and remains my favorite part of the book, even if I kind of hate the design work on all of the lead characters, from Batman's heavily armored costume to the shape of Raphael's mask. 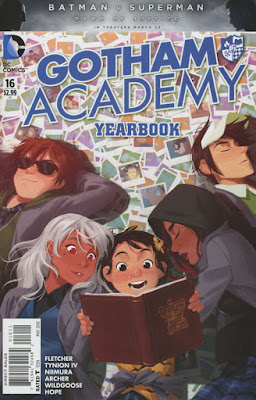 Gotham Academy #16 (DC) Brenden Fletcher and Adam Archer handle the "interstitials"/framing sequences to the two stories in this latest issue of the "Yearbook" story arc, which mainly consists of short stories featuring the book's cast by guest-creators. In their sequences, Robin Damian Wayne breaks into Maps' room and makes off with her homemade yearbook.

The guest stories are by James Tynion and Christian Wildgoose and by Ken Niimura. The former is an incredibly cute story in which Batman is cast as a sort of Santa Claus-like figure who young Maps tries to stay up late enough to visit, while the latter features the whole cast and features Maps and Olive trying to manufacture an excuse for the Detective Club to hang out when there isn't actually a real mystery for them to solve. Wildgoose's art is great, but quite realistic compared to the look the book usually has, while Niimura's has a refreshingly indie feel to it, including hand-lettered dialogue and narration.

The format of "Yearbook" is, by necessity, one of fits and starts, but it will likely read great in a trade collection...which, based on the available direct market sales figures, seems to be the way most people must read this series anyway. 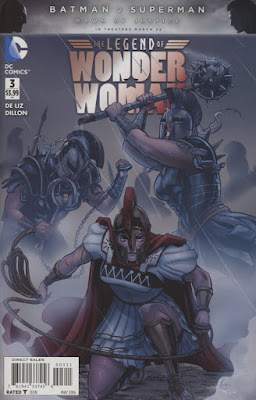 The Legend of Wonder Woman #3 (DC) Renae De Liz's epic Wonder Woman origin story continues, and it continues to be not just great, but surprisingly so. With this issue, Wonder Woman finally leaves the island with Steve Trevor, and while the essentially elements are similar to previous, foundational tellings–like Diana disguising herself to compete in a contest to choose an Amazon champion responsible for Trevor against the wishes of her mother–De Liz makes presents the exact circumstances in refreshingly new ways that not only help further her particularly complex vision of Amazon society, but also makes her telling unique.

There's a scene where Hippolyta presents Diana with her various weapons and armor, and here Wonder Woman's powers–strength, speed, limited flight–are still gifts of the gods, but they are imbued within the items. I particularly liked how De Liz continues to show how Diana employs a rope as a weapon for incapacitating foes without killing or even hurting them badly, foreshadowing her use of the magic lasso, which she is finally gifted with near the end of this issue.

I was slightly surprised as the last page, which finally let's us know when this story is set–it's 1944 in Man's World–which will make this a period piece. I know I've said this before, but Wonder Woman seems inextricably linked to World War II in a way almost none of her fellow Golden Age characters are, so I was curious to see if or how De Liz would try to uncouple her from it. I guess she's not going to, which means The Legend has more in common with DC Comics Bombshells beyond being a top-notch Wonder Woman story.

Fantastic use of Jumpa in this issue, too. 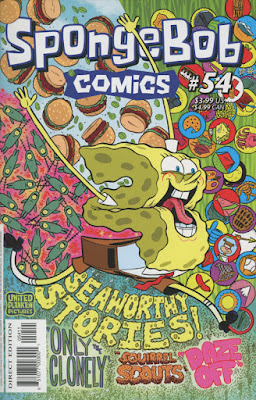 SpongeBob Comics #54 (United Plankton Pictures) Brian Smith's cover promises "3 Seaworthy Stories," but those three stories are just three of the usual assortment found within the pages. I guess they just didn't have an overriding theme this issue, as they so often do...?

Those stories are pretty straightforward ones by Gregg Schigiel, Brian Smith and Joey Weiser and Stephanie Yue, all in a fairly straightforward style...well, Yue has a softer, more storybook-like style, but the other two look perfectly compatible with the aesthetic of the cartoon inspiration of these comics. In between those three are a four-panel table of contents strip by Andrea Tsurumi (panel two of which contained my favorite gag of the issue), a James Kochalka four-page story (in addition to his usual "SpongeBob Funnies") and short comics by Charles Brubaker, Maris Wicks and Sam Henderson.
Posted by Caleb at 9:06 PM

I think the other Golden Age character with the un-erasable link to WWII is Captain America.

True. The post-Silver Age conception of the Captain America character kind of has an out for telling Cap stories set in modern times that the Wonder Woman stories, lack. I mean, they could always reconfigure Wonder Woman so that she's immortal, and has simply been alive since World War II, but I guess making her so many decades older than her super-peers skews the DC Universe in ways they wouldn't want to skew it.