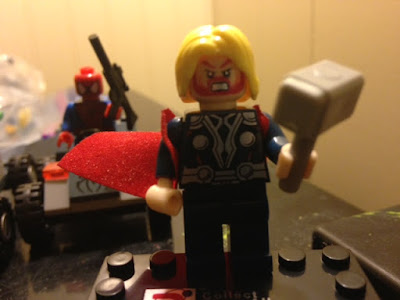 My three-year-old nephew likes Legos and he likes superheroes, and Lego makes a lot of superhero-themed play-sets. The only downside? They're awfully expensive. My sister thought she found a pretty good solution when she found a set of eight super-heroes, each with their own, individual vehicles, for sale for an extremely low price online, and so she ordered them to put in his Easter basket.

Something tells me that these might not have been completely official. While they look a lot like Legos, they don't have the Lego logo on them anywhere, and there are some...subtle differences from what one might expect to find in a set of officially-licensed and produced Avengers toys.

The first thing that struck my sister and nieces as fishy wasn't that each hero came with a vehicle, although I always think it's weird when a character who can fly like Thor has his own helicopter, or a character who is barely capable of logical thought like The Hulk, has a race car.

No, it was the fact that the vehicles came with no instructions as to how to assemble them. My eldest niece was able to find photos of them online though and then painstakingly went about assembling eight helicopters, race cars, boats and jeeps based solely on the photos of the finished products.

And then there's the fact that this Avengers line-up is a peculiar one. In addition to Captain America, Iron Man, The Hulk and Thor, it features Wolverine and Spider-Man. My my sister and niece knew from the movies and cartoons that those last two didn't belong, but perhaps this toy set is reflecting the original New Avengers line-up, in which case they belong there as much as anyone else. As for what Superman and Batman are doing with the Avengers, however, your guess is as good as mine.

As you can see in the image above, Thor is wearing his movie costume, but it looks like he's dyed his beard and eyebrows a shade of red that's somewhere between burgundy and hot pink.

What's that, you ask? Is that a rifle in Spider-Man's hand in the background? Why yes it is! 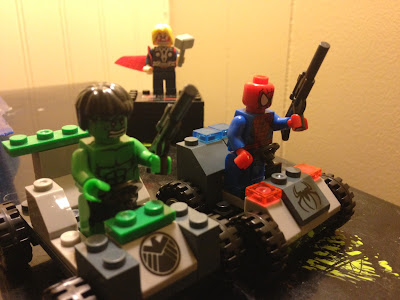 In fact, both Spider-Man and The Hulk come with shotguns, just in case their super-strength and web-shooters aren't enough to get the job done. (Although, now that I look at the guns more closely, I see they both have scopes on them, so perhaps they are not shotguns after all, but some sort of high-powered sniper rifles? Okay, I can kind of see how Spider-Man's power-set, if not his morality, would make him an ideal sniper, but The Hulk? He would be the worst sniper.)

But if you think that's weird, it's certainly not as strange as Superman's accessory. 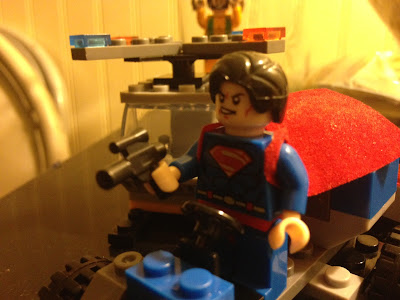 That's right, the guy with heat-vision is also packing heat, although his firearm is a handgun, which he can easily tuck into the belt holding up his red underwear.

Finally, here's Wolverine, who, like Thor, came with a helicopter that he can't actually fit inside. 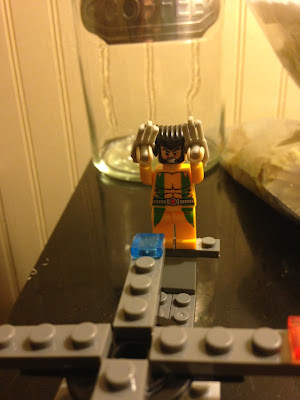 He's the best there is at what he does, and what he does is ride balance on the tail of his helicopter, wearing a yellow outfit with green stripes on it.