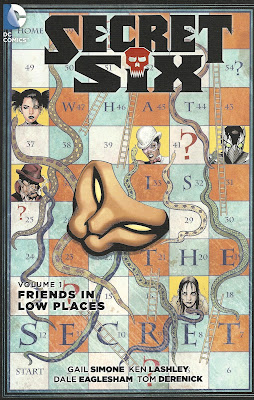 The second volume of the Gail Simone-written incarnation of Secret Six (following a healthy, 36-issue series that lasted from 2008-20011) reads infinitely better in trade than it did in serially published, comic book format. But then, it would almost have to, as the book's unusual delays hobbled it almost immediately upon launch.

The first issue, featuring artwork by Ken Lashley and a striking cover by Dale Eaglesham, was released in December of 2014. The "six" of the title were a half-dozen villains and anti-heroes, including the New 52 introduction of Catman (given a radically different costume that altered his original origin dramatically, but is otherwise a strong design), reappearances by the Simone-created Ventriloquist III (or II in the New 52, I guess) and Black Alice (whose New 52 debut came in DC Universe Vs. Masters of The Universe, of all places), plus mute Court of Owls assassin Strix (from Simone's run on Batgirl) and new characters Porcelain and Big Shot.

Structured as a bizarre (if familiar, Saw-like) horror mystery, it featured our point-of-view character Thomas "Catman" Blake being abducted and waking up in a seemingly inescapable, coffin-shaped room with the other five characters, while their captor posed a vague, open-ended question (which doesn't make sense, given what follows) and occasionally delivering electric shocks. A lot of mysterious elements, a lot of questions and relatively little connection to the previous series, outside the presence of this new, New 52 version of Catman.

The second issue missed January, and didn't ship until February of 2015. The creative team remained the same, but the plot advanced only minimally, with the characters working together to escape their prison and kill their captors–save the unseen boss, Mockingbird. The present was broken up with flashbacks to Catman being thrown into another prison by a group of characters who may or may not have been the same as the ones imprisoning the Six, where he was kept one year and then released (Kind of like a less extreme version of Oldboy, really).

Who many of the characters were, and what their relationship to one another and why they were targeted remained a mystery. Mystery is fine, of course, but keep in mind that this was a brand-new series still in the process of establishing a premise, and after just 40 pages spread over three months, it still wasn't quite there.

And then the book disappeared for a while, missing three months and only reappearing again in June with the third issue. At this point, the art started changing, with Tom Derenick drawing the final 12 pages after Lashley's first eight, but it finally came together. These six odd-ball characters were going to band together to find and fight Mockingbird for what he did to them. Their initial base of operations would be Big Shot's home in a Gotham suburb.

The book remained on schedule after that point, shipping monthly, but the damage was apparently already done. There were a lot of hurdles placed before readers to make it this far, as they had to wait a total of seven months for the first three issues and, if the sales estimates to direct market retailers are any measure, few stuck it out and were content with what followed: By the sixth issue the book was selling several thousand copies less than when the previous volume ended, and by the seventh issue it was reaching cancellation levels (As it turns out, it is to be cancelled, being one of the many comics to not be reborn during this summer's "Rebirth" initiative).

Readers who encounter the book in trade for the first time will, of course, be spared all the waiting and the threat of waning interest between issues. The extraordinary length of time that it took Secret Six to hit six issues is still somewhat evident here, however.

Like all DC books, Secret Six had an eight-page preview story appear during DC's Convergence break. Most of the trades in which these previews have appeared have done so at the beginning of the book, but because of the timing of Secret Six's launch and the delays, their preview appears practically at random in the middle of Simone's storyline (between issues #3 and #4). It's a bit jarring, as the preview story is actually a completely complete story, and one in which the Six are presented as a fully functioning team taking on the sorts of mercenary jobs that the team in Simone's previous Secret Six series did. But that's not really who this team is, at least, not yet, and so it reads like a hiccup in the narrative, a flash-forward not demarcated as such in anyway. 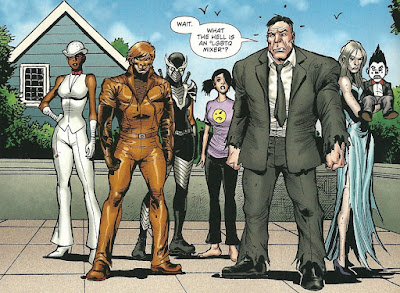 By issue three, the book begins to take form, and Simone has fun contrasting her characters with the wholesome-looking, sitcom stage of a house that Big Shot, a private eye named Damon Wells with the super-human ability to Hulk out. Members of her old Six appear as mercenaries working for Mockingbird, sent to try and recover the new Six: Ragdoll, Scancal Savage and Jeanette, all rather ridiculously concealing their identities in head-to-toe, Snake Eyes-like black costumes with red goggles.

Just as I was starting to get comfortable with the series, despite not being a huge fan of Simone's sense of humor and actively disliking her reinvention of Alan Grant and Norm Breyfogle's Ventriloquist and Scarface characters married with elements borrowed from horror movies (plus, telekinesis!), the last panel of the fourth issue drops some bombshells, including the true identity of one of the new characters and Mockingbird.

So overall, it's a pretty strong book, particularly if you were a fan of Simone's original. Lashley's art was fine, but that of Derenick and Dale Eaglesham is far better, particularly for a book with such a large cast and so many colorful characters (Derenick draws the sixth issue in its entirety, Eaglesham draws #4 and #5, plus the eight-pager in the middle of the book).

Like the previous Secret Six, it's a book about some fairly terrible, extremely broken villains-turned-anti-heroes who form a makeshift family and bond over scrambled eggs and mutual enemies, falling victim to and occasionally victimizing worse people. Despite my dislike of The Ventriloquist and Ferdie, this is a strong, diverse cast with an interesting mix of personalities, powers and gimmicks. Had it managed to ship monthly and with its eventual art team at the beginning–say, if DC held its launch until June 2015's "DCYou" initiative–it likely would have fared better, perhaps even surviving into the "Rebirth" phase of DC's publishing plans.

I'm a little baffled by the last two issues, though, as Mockingbird's real identity is a weird one, as is that of the traitor in the Six's midst, as is the reason the Six and Mockingbird are in conflict at all.

And now let's discuss spoilers, after this image from the cover of Secret Six #2, so click away now if you don't want this spoiled for you. 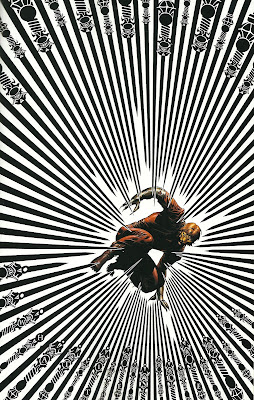 Mockingbird is The Riddler, and Big Shot is Ralph Dibny, who pre-Flashpoint was known as The Elongated Man (Whether that's the case in The New 52 isn't revealed; Dibny mentions his ability to stretch, but not whether or not he was a superhero with a costume and codename.)

Why did The Riddler take on a secondary codename? Why did he abandon his riddle/puzzle motif? When did he take up long-term kidnapping? No idea. As for why he had it in for the Six, they were all aboard a yacht of his when a precious gem was stolen, and he thinks one of them did it and still has the gem. That's why the "What is the secret?" question was so weird; he had trapped them in order to get the thief to confess, apparently, but the set-up didn't make sense, as he threatened to kill one of them if they couldn't answer the question...not riddle, but question. Wouldn't "Who has my fucking diamond?" be a better question...?

The yacht that the diamond was stolen from blew up and sank, and during the chaos Ralph Dibny and his wife Sue Dibny were separated; he assumed she was dead. It turns out, she wasn't dead, but was with Riddler/Mockingbird this whole time. Although she seems to have amnesia?

And so Dibny's powers somehow changed a little, so that he looks/made himself look completely different, and only swells rather than stretches...?

And also The Riddler is madly in love with Sue, and was planning on proposing to her with the diamond, even though she was already married to Ralph...?

Like I said, none of this makes a whole hell of a lot of sense to me. The reveal isn't really one of those New 52 paradox reveals, as it doesn't really matter who the Dibnys are, and everyone knows The Riddler (although I found Catman and Scandal's characterizations of him as a loser odd; sure, he's no Joker or Lex Luthor, but he did conquer and rule Gotham City for months during "Zero Year").

Riddle-obsessed villain The Riddler being in conflict of mystery-loving hero The Elongated Man, even vying for the affections of the same woman, is kind of interesting, although it's pretty out-of-left field in this comic...and what makes it interesting is knowing the Dibnys and a little about their history, of course.

The conflict is kinda sorta partially resolved, with The Riddler and Sue escaping and Ralph/Damon with his new team, but there are a lot of loose ends that Simone will have to wrap up before the series ends in June, and there's only one more trade paperback's worth of issues to do it in.
Posted by Caleb at 10:01 PM

I loved the first incarnation of Secret Six, a worthy spiritual successor to Ostrander’s Suicide Squad, but picked up this second volume in the singles only to find it to be a bit of an ugly, muddled mess. That is, until Dale Eaglesham issues started turning up and the whole comic took a massive turn for the better, becoming the well-written, well-drawn witty book it should have been from the beginning. Too bad the whole affair has had a whiff of doom around it since those first several weak issues – I honestly can’t blame anyone for not sticking around when it stumbled out of the gate. I will say though, the Catman redesign is the rare instance of a New 52 costume being superior to its predecessor.

How can publishers be made to understand the damage that falling off schedule does? Not only does it increase attrition, angry readers actively drop it.

I read the first two issues of this series of Secret Six because I absolutely loved the previous one - but I found the story to be rather dull, and I really intensely disliked Lashley's art (even more so when compared to Nicola Scott on the previous series), so I cancelled my pre-order. I'm not tempted to buy it again even after your review, but I'll look out in my local library for it.