Green Lantern #50 and The New 52 paradox 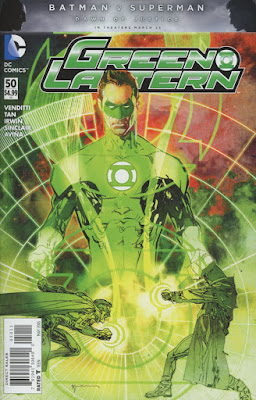 Writer Robert Venditti had an appropriately big moment for the 50th issue of the Green Lantern title, which he inherited from Geoff Johns after the latter left the title and the franchise in 2013. With the New 52 universe set to end, or at least be "reborn" in just two more issues as part of a still somewhat mysterious branding initiative the publisher has dubbed "Rebirth," this over-sized anniversary issue also functions as the beginning of the book's climax and conclusion.

That big moment? The pre-Flashpoint, pre-New 52 version of Parallax Hal Jordan, plucked from the time-stream in the midst of Zero Hour by Brainiac for eventual usage in Convergence, coming face-to-face with post-Flashpoint, New 52 Green Lantern Hal Jordan. That sentence, you'll have noticed, includes references to three inter-company crossovers and a branding initiative, spanning some 21 years.
It is therefore demonstrative of the core problem of The New 52 reboot, a built-in tension, a set of cross-purposes that makes the current DC Universe not only unstable, but often infuriating to read. The publisher schizophrenically wanted to streamline their decades-long, confusing and perhaps alienating continuity in order to start fresh, telling brand-new stories featuring new versions of their characters...while continuing to reference old characters and old plotlines, lazily resting drama on completely un-earned allusions to that continuity they were supposedly excising.

The result? Comics that kinda sorta look like they started over, but read like even more confusing (and perhaps even more alienating) than the set of stories they were meant to replace. These were comics primed to annoy, frustrate and alienate long-time readers, while doing the same to any new readers brought in by the prospects of brand-new #1 issues, which promised a fresh start but were actuality just a continuation of a serial story being told month in and month out since 1986 or so.
The plot of this issue is that the Zero Hour-era Parallax, who was one of a handful of characters–including The Flash Barry Allen, post-Crisis Superman and Lois Lane and Supergirl–to return to the events of Crisis On Infinite Earths (1985-1986) at the end of Convergence (2015) and somehow alter the outcome of COIE so as to reboot the current, 52-Earth DC Multiverse and end up in the post-Flashpoint combined Earth-0, has finally returned to Earth. He makes for Coast City, the annihilation of which drove him mad enough to kill off the Green Lantern Corps, Sinestro and The Guardians and to absorb the energy of the Central Power Battery, making him unfathomably powerful (During Geoff Johns' retcon of these events in 2005's Green Lantern: Rebirth, this was because Jordan's despair and fear made him susceptible to possession by the alien avatar of fear, Parallax).

Seeing Coast City whole again, he is ecstatic...until he's confronted by The New 52 Hal Jordan, who is currently wearing a long, green trench coat (for reasons) and fighting not with a Green Lantern ring, but with an experimental power gauntlet with the power of a dozen GL rings (again, for reasons).

Jordan doesn't seem to recognize Parallax at first, and, being Hal Jordan, starts throwing punches. Naturally, both being Hals, they fight senselessly for a while.

Only after the two, who both profess to want to protect Coast City and its inhabitants, including their loved ones, endanger the city and their loved ones by fighting for 17 pages, does the New 52 Hal try talking to post-Crisis Hal.

New 52 Hal, who threw the first punch (well, it was a light construct of a sledgehammer, actually) tells post-Crisis Hal that he knows exactly what he went through, because he went through it to–His Coast City was destroyed while he was away, he was infected with a sickness that nearly drove him insane forever too.

One of the many (many, many) particularly irritating thing about the half-measure of a reboot of The New 52 was the editors'–and sometimes the writers', and the characters'–insistence that this particular story still happened, or that particular story still happened, but because of all of the other evident changes, readers know that those stories couldn't have happened, or, if they did in ways that were radically different than the previously published versions we've read (thus creating a "secret" continuity unknown to anyone).


Unfortunately for Green Lantern readers, this particular issue is built on stories that have supposedly un-happened. The destruction of Coast City happened during "The Reign of The Supermen" storyline in the Superman books(1993), following the death of Superman in the early 1990s. That story apparently still "happened," but, in The New 52, it would have had to happen without Supergirl (The Matrix Version), without Superboy (the Cadmus clone), Steel, The Cyborg Superman, Lex Luthor II (actually Lex Luthor I in a clone body, impersonating his own son) and it would have likely had to happen to with a different form of Doomsday, and with a Lois Lane who wasn't married to Superman/Clark Kent. That's...pretty much the entire story, really.

It's possible the events that followed in Green Lantern could have happened more-or-less the same, but what about when we get to Zero Hour? And Parallax was revealed to be an avatar of cosmic fear in Green Lantern: Rebirth, rather than just a goofy name the crazy Hal Jordan chose for himself when he became a cosmic supervillain, and Rebirth was chockfull of elements bounced out of canon, from the relatively minor (Guy Gardner being a Vuldarian) to the integral (Hal Jordan being The Spectre).

And Hal Jordan became The Spectre in Day of Judgment (1999), the main antagonists of which were Neron and Asmodel, introduced in Underworld Unleashed (1995) and JLA (1997), two more books that the New 52 would erased from continuity. And the Spectre Force being unmoored from its traditional host was kind of a big element of Day of Judgmemt, which happened at the end of The Spectre (1992-1998)...and Jordan only bonded with him because Jordan was, at the time, dead, having died in the pages of Parallax: Emeral Night (1996), a tie-in to the Final Night crossover/event series. Of course, this version of Parallax Hal Jordan never died, as he was pulled out of the timeline before the events of Final Night, but New 52 Jordan would have still had to have been The Spectre in order to have stopped being Parallax, right?

That is a lot of comics to ask readers to rewrite in their heads during the course of a 40-page comic, almost half of which is a fight scene. And even if a reader has to rewrite only portions of it–say we assume that, in The New 52's secret continuity, Final Night never happened, meaning that Day of Vengeance never had to happen, meaning that Rebirth happened differently, and so all a reader has to rewrite is "Reign of The Supermen," "Emerald Twilight" and Rebirth, well, that's still three storylines from as far back as almost 25 years, just to get to this climax.

And if a story is premised on at least a passing familiarity with stories that are almost 25 years old, well, what was the point of The New 52's continuity brush-clearing reboot again...?
Posted by Caleb at 7:50 PM

Exactly! I just could not bring myself to get this book... and I am a Green Lantern fan. But it was horribly drawn, and just made no sense whatsoever!

My question is DOES the story (per the New 52 version) predicate that all those need to have happened, or does it merely require that Coast City was destroyed while Hal Jordan – possessor of the Most Powerful Weapon in the Universe and savior of Coast City on repeated occasions – was out in space and unaware of this and unable to stop it (and hence leading him to the heights of despair-induced rules-breaking that lead to Emerald Twilight). You and I both remember from our own readings of those issues – and the previous continuity – that it was Mongul's Engine City that destroyed Coast City, but do we know that such an event (a ludicrous one, when one stops to consider it) was the same cause 'this time around'? I think, for example, of the earthquakes that struck San Diego (in Aquaman's 'Sub Diego' storyline) and Gotham City (in Cataclysm/No Man's Land) and wonder whether a Northern California city like Hal's could have devastated by 'the big one' in his absence (where he would been fairly easily been able to release the pressure and save millions of lives had he been present) – does the story here give an indication about WHAT destroyed the city or just that it was destroyed, Hal responded deeply inappropriately, and the two timeline-variations go from there (that there are two variant Hals means that not ever event in their timelines need correspond, even if some happen to have similar outcomes from dissimilar preludes).

Yeah, I know I didn't really discuss the art in this post, but it was NOT good. The fact that it was so full of splash pages and pages with three or fewer panels only accentuated that weakness too.

Welllll, at the very least, The New 52 version of The Parallax story at least has to incorporate some version of "Reign" (Coast City gets destroyed; Hal is drawn just as he was during "Reign," including graying temples and broken arm in a ring-construct sling), some version of "Emerald Twilight" and some version of "Rebirth" (Parallax the fear entity is introduced). That's my point though. DC keeps wanting to use old stories as foundations for new ones while telling us the old stories don't matter, or arent' important, or didnt' happen, or maybe parts of them happened, but they happened differently than the way they originally did. Readers shouldn't have to constantly re-edit DC canon in their minds to make sense of the monthly comics. Venditti could have just NOT wrote a story completely dependent on a 20-some year-old storyline at the climax of a three-year run on a five-year-old title.

As for an earthquake, I think that's a little outside the scope of my post, but even if we were trying to win No-Prizes here, that wouldn't account for it. If you haven't read the issue, it opens with "Reign"-era Hal kneeling in an ash-filled crater and narrating about how everyone in the city is dead.

The prelude was Parallax's flashback, though, not New 52 Hal's. All of the Reign/Emerald Twilight/Zero Hour stuff happened to Parallax, the way we know it from pre-Flashpoint, but as Brian mentions, it may have happened similarly but with key differences to Hal post-Flashpoint. So your point about the prelude doesn't undo Brian's argument. The initial narrative box even states it was from a different time and a different universe.