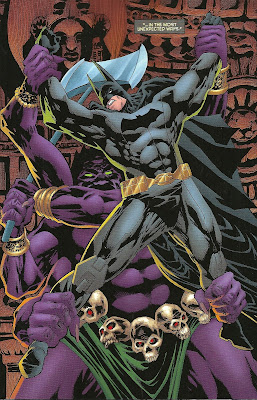 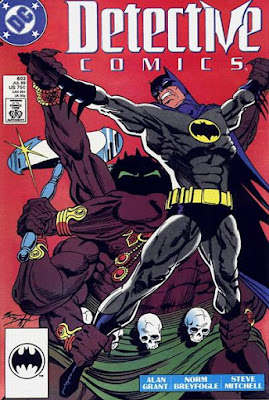 It appears as one of the the 13 pages in a back-up story entitled "The 11 Curious Cases of Batman," written by regular 'Tec writer Peter J. Tomasi and drawn by Scott McDaniel and a murderers' row of great artists, each of whom draws a pin-up "cover" of a past 'Tec cover (John McCrea, another of my favorite artists, also contributes one, drawing an homage to an old Gene Colan cover of Batman facing off against a trio of killer clowns, although McCrea flips the image around so that we see it from the opposite angle).

Detective Comics #50 is, like some of the other 50th issues being published this month, priced at $4.99, and unlike, say, Green Lantern or Action Comics, it doesn't have an extra-length story filling its pages, nor does it have several short back-ups, as in Catwoman. Instead, editor Mark Doyle seems to have worked with Tomasi to gather a dozen artists for this fun feature. At just 13 pages, all of which are splashes or pin-ups, it's probably not worth the extra dollar or so (the main story, by Tomasi and artists Fernando Pasarin, Scot Eaton, Matt Ryan and Wayne Faucher, is 25-pages long rather than 20 or 22), but it's a hell of a lot of fun.

Personally, I probably would have assigned Jones to cover the cover for 'Tec #425, as that was a Bernie Wrightson cover featuring a monster man and a horrifying horse, and thus sat smack dab in the middle of Jones' area of expertise, but, like I said, I love the fact that two of my favorite Batman artists are in conversation with the Jones-after-Breyfogle image (Also, maybe Jones' version of Wrightston's image would have been a little too similar, whereas Carmine Di Giandomenico went in a different direction with it entirely...even if his scary horse isn't nearly as scary as Kelley Jones' scary horses are).

Oh, and if you're at all curious as to what the heck Baman is doing fighting a six-armed, battle axe-wielding ogre in that image, the cover is from the middle issue of the three-part "Tulpa" story arc, written by Alan Grant and drawn by Breyfogle and inker Steve Mitchell. A mystic uses his supernatural ability to create a tulpa demon to help protect him from the criminals that keep shaking him down for money, and Batman tries to save the poor bastards. He turns to fellow Gothamite Jason Blood for help, but it's not until the climax that Blood finally relents and lets Etrigan out. The Demon and Batman have a pretty spectacular battle. It's collected in Legends of The Dark Knight: Norm Breyfogle Vol. 1, which you really should buy, if you haven't already.
Posted by Caleb at 11:01 AM