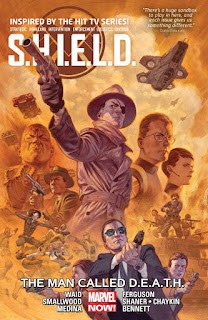 This collection collects the next six issues of Marvel's Mark Waid-written SHIELD comic, which features the main cast from the TV show Agents of SHIELD as part of the real Marvel Comics Universe (instead of the Marvel Cinematic Universe). And, because Marvel cancelled the series along with everything else in their line once last year's Secret Wars began, that means SHIELD Vol. 2: The Man Called DEATH also collects the second half of the too-quickly-canceled, 12-issue series (It has been semi-relaunched as Agents of SHIELD, but with writer Marc Guggenheim at the helm; I can't tell you if or how much it's changed, having not yet read it though).

The format of The Man Called DEATH is fairly similar to that of the first volume, Perfect Bullets, with Phil Coulson the one constant character in each issue, with various members of his TV team–Fitz, Simmons, May and, as of this volume, Skye/Daisy/Quake and Bobbi Morse (in her full Mockingbird regalia)–coming and going as needed. Almost every issue features a guest-star from the Marvel (Comics) Universe, so the book continues to be a good introduction to the wider, wilder world that inspired the cinematic universe, particularly useful to fans of the show who may not have ever met Howard the Duck or Dominic Fortune. And every single issue features a different, usually fantastic artist, so it also serves as a crash course in great comics artists for the TV/movie fans-turned-readers that this book is hopefully attracting (Although, personally, I'm not overly hopeful, given Marvel's tendency to reluanch and re-title willy-nilly, it can be really hard to figure out which books to read; I didn't even realize what this book contained until I brought it home from the library, originally thinking that it must be a collection of those recent anniversary one-shots, based on the cover image).

Here's what this volume contains:

•The introduction of the comics version of Daisy "Quake" Johnson to the cast, in a story that essentially officially merges her with the Skye character of the TV show. The villain is her father Mr. Hyde. This one's drawn by Greg Smallwood, whose work is close enough in style to that of Chris Samnee that this issue is pretty evocative of Waid and Samnee's Daredevil. The lay-outs are not just easy to read, but clever and sophisticated, with lots of white space between and around the panels. Tastes vary from reader to reader, of course, but I'm pretty sure this is the best-drawn issue in this collection.

•Coulson sends Mockingbird and May to tackle a human trafficking ring that abducts children, surgically alters them in fantastic ways (sewing on wings, tails or horns and so on) and then sells them to the highest bidder. This one's drawn by Paco Medina, and is maybe the weakest, visually. There's at least one really muddy action scene, which really stands out here, given the high quality of just about every other page.

•The title story features Coulson investigating a mystery as old as SHIELD, which turns out to be infinitely older than Nick Fury. Maybe. Having not read Jonathan Hickman's 2011 SHIELD mini-series, I'm not sure if this story directly references or riffs on it or not, but it sure seemed to. This issue is maybe the most interestingly crafted of these half-dozen, although it wouldn't become apparent until the end of the book and some explanatory back-matter. It's something of a collaboration between Jack Kirby, Jim Steranko, Lee Ferguson and Waid. Apparently shortly before the launch of Nick Fury, Agent of SHIELD, Kirby was already working on a comic featuring World War II vet Sgt. Fury as a post-war super-spy concept, and got two pages in. Those pages were later given to Steranko as an inking test. And they reappear here, integrated into the story, which is set in the early days of SHIELD as well the modern day.

•Fitz and my favorite new character from the first volume, the one who is most perfectly-suited for a team-up with an anthropomorphic bird, recruit Howard The Duck to help SHIELD shut down an inter-dimensional threat that is definitely of Howard's milieu. It's a pretty integration of one book/character's tone and general subject matter into a book that skips all-around the various corners of the Marvel Universe, which is, of course, something of a quilt. Evan "Doc" Shaner draws this issue and, as always, he draws the hell out of it...even though Howard The Duck isn't a character I would have thought would been the most ideal one for Shaner to draw.

•Dominic Fortune recruits Coulson's help in recovering his riverboat casino from the clutches of a Hydra-affiliated businessman and a corrupt croupier, featuring art by Fortune creator Howard Chaykin.

•When a time traveler assassinates Odin, Asgard goes to war with Midgard, slaughtering all of its heroes (including former Thor and current Thor, who sided with the Avengers). Coulson and his whole team travel to Asgard to sue for peace, but they also time travel on the way up or something, and thus have the opportunity to prevent the assassination, thus stopping the war before it start. Not much suspense in whether or not they succeed, of course, but, once again, it allows Waid to take the book to another corner of the Marvel Universe, and work in the space-mythology of Asgard as well as confusing time travel. This one's drawn by Joe Bennett and a handful of inkers, and isn't a terribly visually exciting issue, although there are plenty of opportunities for striking imagery.

As with the first collection, this premise and format works really well for me, and it seems like it should theoretically work really well for new readers–I don't think I've ever seen Marvel produce a comic that seems so well-designed to capitalize on mass-media adaptation by selling a particular group of viewers on not just a comic, but their whole comics line in general.

In that respect, it's kind of too bad they gave up after only a year's worth of issues, as even if the new Agents of SHIELD comic mimics this one rather closely, it also has a new title and will thus be renumbered, and will just add to the messy pile of Marvel comics with the words "SHIELD" in the title and/or to feature Coulson.

On the positive side, if any comic shop owners whose customers come in and tell them they watch Agents of SHIELD and want to know which comic they should read, or if any comic book readers who friends ask them for recommendations for a comic featuring those characters, well, they'll know what to suggest: SHIELD Vol. 1: Perfect Bullets and SHIELD Vol. 2: The Man Called DEATH
Posted by Caleb at 6:07 PM

Interesting because, yes, this should've hit that sweet for among Marvel superhero readers, newcomers from the Cinematic, and Waid fans. Stopped racking at the shop by this point because it just wasn't selling.