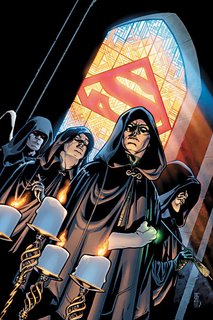 52 #12 (DC Comics) This is the issue of the series I’ve been waiting on for months now, ever since I first glimpsed J.G. Jones’ beautiful cover for it online (I do hope DC is planning a prestige format, 52-page collection of all of Jones’ covers for the series, with an original wraparound cover, for early 2007 release). The bulk of this issue is devoted to Ralph finally busting up the resurrection cult, with assists from formerly resurrected Leaguers Green Lantern Hal Jordan, Green Arrow Oliver Queen, Zauriel and Metamorpho. It’s a nice mix of characters, culled from different eras of League history, and, as one of the world’s 14 Zauriel fans, I was happy to see Z back in action. There’s a bizarre twist at the climax, one that should make the next 39 weeks very interesting for Ralph’s character. Cult leader “Devem” seems to have been on to something, or Ralph’s gone a little crazy, or the 52 braintrust actually has done the impossible, and actually thought of a way to include Brother Power the Geek in this year-long epic story.

Nitpick-o-rama: Shouldn’t Zauriel have taken his big pointy gold helmet off to better his disguise? His eyes are also mis-colored throughout the issue. But more importantly, so now Zauriel and Metamorpho know Batman’s secret identity too? Why does Batman even bother wearing a mask anymore?

Agents of Atlas #1 (Marvel Comics) The weird, extremely dated superheroes of Marvel’s “lost years” return in this new miniseries by Jeff Parker, Leonard Kirk and Ken Justice. Gorilla Man, The Human Robot, Venus and pre-Morrison Marvel Boy, the hero from (giggle!) Uranus hook up with their old boss, SHIELD agent Jimmy Woo to take on the villainous Asian Stereotype—I mean, the Yellow Claw. Honestly, they had my $2.99 me at the word “Gorilla Man.”

The All-New Atom #2 (DC) The new Atom, Dr. Ryan Choi, and his fellow eccentric Ivy U scientists, experiment with modes of tiny transportation, and the little guy has his first superhero adventure. I’ve decided to simply ignore writer Gail Simone’s criminal abuse of the asterisk, which makes this closer to the perfect comic book it has the potential to be. And I love the alien invaders’ alien grammar and agreement: “You have your orders! It is disintegrate him!” Awesome.

Detective Comics #822 (DC) With Batman: The Animated Series producer Paul Dini finally writing a comic set in the DC Universe proper, I suppose it was only a matter of time before his creation Roxy Rocket (who appeared in both the Batman and Superman cartoons and the Batman comics based on the cartoons) appeared. But did it have to be his second issue? She’s only on the first page though. The issue revolves around Batman and a reformed Riddler trying to crack the same murder case. Pay close attention to the weird details penciller Don Kramer fills the background with in the underground BDSM club. Best part? Page 12.

Marvel Team-Up #23 (Marvel) Aunt May vs. Wolverine, with the fate of the New Avengers’ gallon of milk at stake! Iron Spidey and Wolverine vs. The Iron Maniac, with snide remarks about Spider-Man’s stupid-ass costume redesign! And new hero Freedom Ring teams up with his nosey neighbor and trains to be a proper superhero. Robert Kirkman’s script is full of fun, light-hearted moments. I’ll be sorry to see this title go, as it was just recently announced to be on the cancellation chopping block.

Ultimate Spider-Man #98 (Marvel) Wait, how many times has Brian Michael Bendis seen Waterworld (once is too many times) to be able to write that opening scene with the FF? The Ultimate Clone Saga continues, and the shock of finding out that Ultimate Scorpion was a clone of Peter Parker was nothing compared to the trio of shocks that come in rapid succession this issue.

The Oz/Wonderland Chronicles #1 (Buy Me Toys) Nice cover by Joe Jusko, featuring a grown up Alice surrounded by a grown-up Dorothy in Judy Garland drag and the denizens of Oz. It’s pretty much all downhill from there. Casey Heying’s art has a strange artificiality about it (I suspect the foul touch of computers), like art that’s striving so hard for realism that it overshoots and looks faker than the most expressionistic art would have (he does do a mean lion and tiger in this style, though). The story is a perverse mess, about grown-up Alice (of in Wonderland fame) and grown-up Dorothy, now both sporting D-cups and living with other grown-up versions of girls from public domain stories in Chicago, encountering creatures form both of their fantasy worlds. The Wizard of Oz appears packing two six-guns, and sends them both to Oz to stop a new Wicked Witch’s plan to destroy all three worlds. Ugly art aside, writer Ben Avery and Heying (who also has a writing credit) have plundered two classics, but in a willy-nilly, nonsensical way, that doesn’t adhere to the rules of either of the fictional universes it draws on, and ends up seeming intellectually lazy (For starters, shouldn’t these ladies be senior citizens, if they’re still alive at all? And shouldn’t Alice be English? And hasn’t anyone in Chicago ever read a book or seen a movie before?). After seeing the melding of these two story-scapes done so horribly wrong again, I’m even more excited for Lost Girls than I was before I read this mess.
Posted by Caleb at 8:19 PM