Delayed Reaction: Batman: Under the Hood 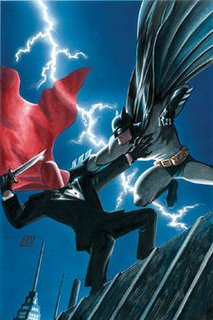 Batman: Under the Hood (DC Comics), by Judd Winick, Doug Mahnke, Tom Nguyen and others

Why’d I Wait?: Writer Judd Winick has been responsible for some great creator-owned work, particular Pedro and Me and The Adventures of Barry Ween, Boy Genius, but his DC work all seems to fall somewhere between mediocre (Blood and Water, Green Lantern), bad (Green Arrow, most of Outsiders) and downright repulsive (“Lightning Strikes Twice,” the John Walsh-guest starring issues of The Outsiders). So despite the stellar art team inside and out, this seemed like a story to avoid—particularly once rumors started circulating that it would be about the resurrection of Jason Todd, perhaps the one character in the entire DC Universe that should never be resurrected for any reason.

Why now?: Since they really went ahead and resurrected Jason Todd (I was so sure they wouldn’t actually go through with it), morbid curiosity made me want to find out exactly how well executed The Worst Idea In DC Comics History actually was. Plus, I’d just put down the first volume of The Winter Soldier, which I guess put me in the mood to read about resurrected boy sidekicks.

Well?: This is a hard book to read, and a harder book to review, because the central idea—Jason Todd, back from the dead!—is so hard to get past. It’s just so wrong on so many levels, from the fact that he suffered the most unequivocal death in comics (beaten to near-death by a crowbar, then dynamited), to the fact that Batman comics don’t have the sort of science fiction or supernatural underpinnings that so many other comic books do, to the fact that Todd’s death was the result of a 1-900 phone poll (making Jason Todd’s death perhaps the only one in comics history that the fans decided on, rather than the writers and editors) to the simple fact that the death of the second Robin has been a pivotal event in Batman’s history, leading to some 20 years worth of character development.

Well, putting all of that aside, Winick does weave a fairly dramatic reveal here. The volume opens with Batman fighting a new Red Hood, who unmasks off-panel, and then we flashback to what lead up to the battle.

There are an awful lot of unanswered questions here, including why Jason Todd is still alive, why he’s a grown man instead of the age he was when he died and why he’s suddenly become evil. He sets himself up as a relatively nice crime boss (You can sell drugs, but not to kids), but he has a savagery that makes him seem as bad as, if not worse than, the villains. When he takes over a racket, for example, he does so by handing the old bosses a duffle bag full of the severed heads of their associates.

Winick writes some fairly exceptional character moments between Batman and Nightwing, particularly during their fight with an Amazo android, and there are some wonderfully sharp exchanges between Batman and members of the so-called “Power Pact” that mindwiped him in Identity Crisis.

Winick’s Black Mask has a nice, rhythmic sense of black humor in his back-and-forths with his underlings, even if his character is simply Winick Stock Villain Boss. And his use of Mr. Freeze is criminal. He writes him as Winick Stock Mercenary Villian, which is a damn shame, considering the character’s potential (The best use of which was in the first season of Batman: The Animated Series).

The main problem with this graphic novel as a whole, however, is that it relies too much on other stories. If you haven’t read at least “Hush,” Identity Crisis and Batman: A Death in the Family, little of this story will make sense. What separates a decent story arc from a great one will always be how readable it is on its own, and Under The Hood just doesn’t stand up by itself.

Regarding the art, the team of Doug Mahnke and Tom Nguyen (responsible for a fine run on JLA and the underappreciated Justice League Elite) have simply done the work of their careers here, and Matt Wagner’s covers are all exceptional.

Confidential to DC: Ever put any thought into a Matt Wagner omnibus? Maybe “Faces,” Trinity, his Demon miniseries, his random Batman short stories and all the covers he’s done over the years? Think about it.

Would I travel back in time to buy the original issues off the shelf?: Oh, hell no.
Posted by Caleb at 9:24 PM

This trade doesn't include the "punching reality" annual, does it? So there's no explanation for Jason's resurrection?

Nah, I think that comes in Vol. 2. This ends with "The Red Hood" unmasking to reveal his domino mask. If I recall the solicits correctly, the Annual was the conclusion of the story. I plan to get to reviewing that eventually too.