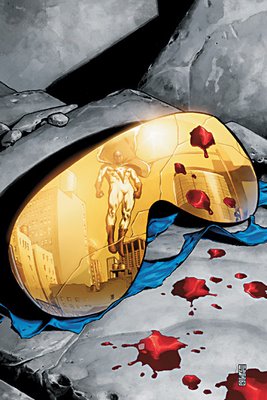 52 #15 (DC Comics) As the cover of this week’s issue spoils, Booster Gold doesn’t seem like he’ll live to see week sixteen. Is this the final nail in the coffin of the Giffen/DeMatteis Bwa-Ha-Ha League? I wouldn’t bet on it. There’s little DC could do that would surprise me at this point, after watching Jason Todd get resurrected and Batgirl II turn evil on a dime, but 3/4 of the writers involved with this story are just too damn good as storytellers to have ended Booster Gold’s storyline with so many dangling plot threads. And, though we do see a body—a skeleton, actually—there are just too many outs left for Booster to come back, including another version of himself stepping out of the timestream (he may have “died” this issue, but he won’t be born for hundreds of years yet) or Supernova unmasking to reveal himself as the Booster Gold from the past, future or an alternate Earth. Other than the big, splashy death, this particular issue is notable for having perhaps the best art of the series so far, provided by penciler Shawn Moll and inker Tom Nguyen. This team’s a real keeper. The back-up art comes courtesy of Jon Bogdanove, the perfect guty to draw the origin of Steel, though this seems like the wrong issue to run this feature. Steel doesn’t even appear this week; wouldn’t the origin of Booster Gold have been more appropriate?

The Boys #1 (WildStorm/DC) The teaming of Garth Ennis (co-creator of Vertigo’s Preacher) and Darick Robertson (co-creator of Vertigo’s Transmetropolitan) is an inspired one, as is the concept: An elite team who’s job it is to keep track of and administer beatdowns to all of the world’s super-people when they need it. Unfortunately, there’s nothing in here that we haven’t seen from Ennis before. If you’ve read any of his Kev stories—and/or The Pro, Hitman and the Marvel Knights Punisher—then you’ve bloody well already read this issue too.

The Drifting Classroom Vol. 1 (Viz) The title and the first eleven words on the back cover are all it took to sell me on Kazuo Umezu’s early-‘70s horror series: “In the aftermath of a strange earthquake, an entire elementary school vanishes.” This is the exact sort of thing I used to fantasize about when I was in elementary school, though my fantasies just weren’t as gritty, visceral and dark as Umezu’s. I eagerly await the second volume. Love the way Sho runs, too. That kid’s got a sweet stride.

Marvel Adventures Avengers #4 (Marvel) Spidey says “Pwned!” at the end of a fight. What else can you ask for from a comic book?

Phonogram #1 (Image Comics) I picked this up on a whim, as it was a pretty light week, expecting another pretentious hipster indie rock wankfest of a script with decent black and white art, by Kieron Gillen and Jamie McKelvie actually have something much more interesting up their sleeves, regarding the intersection of pop music and magic. And they mean that literally, not figuratively. This series could go either way, but based on the first issue, it definitely has the potential to go somewhere pretty awesome.

Robin #153 (DC) I sincerely meant to drop this title last issue, but I forgot to inform my comics shop, so it was in my pull file this week anyway. This is the team-up issue between Robin and Captain Boomerang Jr., whose fathers killed each other in one of the more ludicrous parts of Identity Crisis (Um, how did Jean Loring know Robin’s secret identity was Tim Drake, exactly?) Writer Adam Beechen repeats that exact same ludicrous mistake here, having Cap Jr. know Robin’s secret identity as well, but Robin doesn’t seem to even notice that). Together the pair search the abandoned hideouts of Bat-villains seeking a nuclear bomb to diffuse, and these scenes are pretty fun, as each villain leaves themed booby traps, and Beechen reaches pretty deep into Batman’s rogues gallery (Dr. Double X, The Cavalier and The Glass Man, anyone?) Beechen writes Robin as a pretty unlikable prick—he comes across more Dark Knight than the Dark Knight here—but some of the traps are pretty fun, and I do like artist’s Freddie E. Williams II’s interpretation of the Boy Wonder. Not enough to get this added back into my pull list though.

Runaways #19 (Marvel) Geez, what is it with female magic users and androids in the Marvel Universe? Gravity artist Mike Norton fills in for Adrian Alphona, and though things don’t seem the same without Alphona, Norton’s a good choice for a fill-in (Hmm, a Gravity/Runaways crossover could be pretty cool…). In this issue, we check in with each of the Runaways to see how they’re dealing with Gert’s death last issue, and none of them seem to be doing so hot. Luckily, a giant demon monster is going around destroying Starbuckses (Starbucki?), so maybe they can take out some of their negative emotions on it next issue. Line of the week: “Yes! It’s cobblering time!” That’s probably just what Ben Grimm’s great-great-great grandfather said when he sat down at his workbench to make a pair of shoes…

Strange Westerns Starring the Black Rider #1 (Marvel) Well, they sure named this title well—It just doesn’t get any stranger than a vigilante gunfighter who disguises himself as a meek, Clark Kent-like bespectacled milquetoast and who rides a horse that similarly disquises itself as a meek, broken down old nag. That’s the title character, who stars in the main feature by Steve Englehart, Marshall Rogers and Al Vey. It’s not bad, but I preferred Joe R. Lansdale and Rafa Garres’ much shorter, creepier, cooler tale of a man who sold his soul to the devil to be the fastest gun in the world going up against Gunhawk. The two original tales are followed by two Stan Lee/Jack Kirby back-ups featuring the Rawhide Kid. The first one, in which everyone in town is prejudiced against the Kid (presumably because he’s a gunfighter), takes on a different meaning entirely now that the Kid’s been officially outted by Marvel.

Transformers: Evolutions #2 (IDW) This second chapter of “Hearts of Steel,” a period piece which posits what would happen if the Transformers were active on earth during the late 19th Century (and if John Henry Irons was a real man and Mark Twain and Jules Verne were involved) is better than the first, but I still prefer artist Gudio Guidi’s awesome re-design sketch covers better than the actual story inside the book.

Ultimate Fantastic Four #32 (Marvel) Oh, thank God it’s finally over. It’s too bad Mark Millar’s off the book already, considering how troubled this book has been in terms of keeping creators and a consistent look, feel and story, but it also means I won’t have to sit through Greg Land’s weird, out-of-place, poorly “acted” artwork each month anymore. Confidential to Land: Ultimate Wasp is Asian, not Caucasian, and she has short, spiky black hair rather than a brunette bob.
Posted by Caleb at 6:07 PM

Thanks for noticing the Land screw-up re: the Ultimate Wasp in UFF #32. I actually searched the internet to see if anyone else did; it was just really, really dumb. He got all the dudes right, but couldn't bother with the chick?