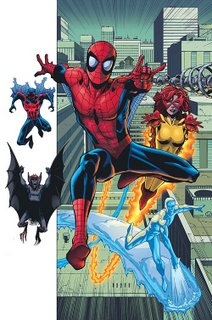 The greatest Marvel Comics writer in the entire city of Columbus, Ohio will have a new comic book out this Wednesday, Spider-Man Family: Featuring Spider-Man's Amazing Friends #1. Sean McKeever is writing the lead feature of the book (one of those reprint-heavy, great value comics you'd have to be nuts to pass up, something like two million pages for $4.99) which will reunite the stars of the 1981 cartoon series Spider-Man and His Amazing Friends (one of wee Caleb's favorite cartoons), Spider-Man, Firestar and Iceman, in the Marvel Universe—for the first time! I spoke with McKeever on Bam!Kapow!'s behalf over the weekend. Check it out here.
Posted by Caleb at 7:21 AM