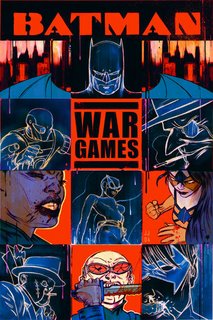 Why’d I Wait?: I didn’t exactly wait, at least not on every single page of this trade paper back collection. I read some of the issues contained herein—Batman: The 12 Cent Adventure, Robin #129, Batgirl #55—but was unimpressed with the kick-off and overall concept of this Bat-book crossover, and decided I’d just read the chapters that are contained in books I was already reading anyway.

Why Now?: After seeing how radically different the Batman family’s status quo is “One Year Later”—Batman and Robin Gotham’s only heroes, Cassandra Cain an insane villain, Oracle and her team totally estranged, Nightwing in New York being messed with by an absurdly resurrected Jason Todd—it seemed like a good time to revisit the previous status quo, when Batman was a sort of general commanding a vigilante army.

Well?: My reservations about this story were only confirmed with reading the entire first act at once. In a very real way, it was a perfect illustration of everything that was wrong with such crossovers, making for a particularly uninviting read.

First and most glaring was the vast differences in the styles of the artists involved. And there are a lot of artists involved—nine pencillers, ten inkers. All of them are competent artists, with Paul Gulacy, Sean Phillips , Pete Woods and the Brad Walker and Troy Nixey team topping the list, but few of the styles mesh well, and each penciller seemed to be free to do whatever they wanted with character design, as if no one were even editing the book.

Also, there is a lot of past continuity going into this. The beauty of the Batman family of characters in general is that everyone knows the story in broad strokes; you can pick pretty much any trade off the shelf and know who Batman, Robin, Catwoman and maybe even Nightwing are and what they’re all about. This story, however, involves a lot of complicated and pretty specific continuity, and demands that you were paying attention to Robin’s monthly title, Nightwing’s monthly title and that you had read the miniseries Batman: Orpheus Rising. Spoiler, the Trantula II, Orpheus, Onyx and Hush all pop up and bring bits of their backstory with them. I've been reading Batman books for about 15 years now, and I was still confused by some of the characters.

As for the story itself, it involves a gang war breaking out in Gotham City. Basically, every crime boss in the city is called to a meeting anonymously, and each one stupidly shows up, each with one body guard a piece, coincidentally. Unlikely as this sounds, they all mill around until tensions get high enough that they all kill each other, leaving a power vaccum in the city that sends the various gangs, syndicates and supervillains into open warfare with one another.

This initial spark to the war involves some pretty hardcore suspension of disbelief—you’d think guys smart enough to run criminal empires would be smart enough not to accept anonymous invitations to shady areas in the middle of the night, and that simply putting enough bad guys in one place at one time wouldn’t be enough to simply make them fall down dead like dominoes. But the late in the volume revelation as to what they were all doing there and why, which comes during the Catwoman issue included within, doesn’t make a lick of sense—the narration in the first chapter seems to directly contradict the revelation of who the “mastermind” behind the criminal extermination really was.

It’s too bad this crossover was so bad, because there are a lot of talented folks involved with it, and it has the ring of historical importance, given the significant changes to the Gotham setting it ushers in—Batman, Batgirl and Nightwing are seen on the TV news, for example, ending the Batman-as-urban legend status quo that’s existed since at least Batman: Year One. Plus, a supporting character is about to die and another is about to become a villain, though not until future "Acts," which I'll get to as soon as I can get them from the library.

Would I Travel Back In Time And Buy The Books Off the Racks?: God no. In fact, if I hade access to time travel tech, I’d probably use it to go back in time and stop myself from buying any of the issues I had previously read; but I don’t think my past self would believe my self from the future, and would have gone ahead and bought them anyway. Which just goes to show that you can’t change the past. Unless you're Superboy-Prime.
Posted by Caleb at 10:52 PM