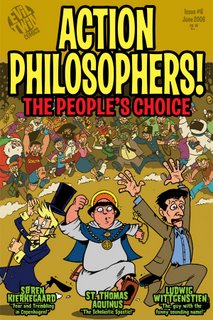 Get thee to bamkapow.com to read my interview with Fred Van Lente, the writer behind the hilarious Action Philosophers! comic. I was pretty bummed when I learned it's winding down, ending with #9. At least until I learned what Van Lente and his AP! co-creator Ryan Dunlavey have up their collective sleeve. Be sure to check it out. Here's a sample exchange to whet your interview-reading appetite:

This week's issue is the "People's Choice," in which the most requested philosophers to get the Action Philosophers' treatment. When you were collecting suggestions and votes for it, did you get any that really threw you?

Oh yeah, like every week—still! (laughs) Somebody writes in recommending someone who I guess turned them on in college but Ryan and I have never heard of before, usually obscure lefties. People have also suggested we do an All-Vegetarian Issue and an All-Feminism Issue, but it doesn't look like that's going to happen.

The one name that keeps coming up is the Marquis de Sade … Jesus, I'm like, people, people: Wanting to fuck everything that moves is NOT a philosophy!

It's an important life goal.
Posted by Caleb at 7:48 PM

Good games to a nail, lost a(wow gold) war.(wow gold) In a particular press to see(wow power leveling) such a foreign minyan: In order to (wow gold)receive a nail, we have lost a mati Tie In order to(wow power leveling) get a piece of mati Tie, we have lost a Pi Junma In order to get(wow gold) a Pijun ma, we (wow power leveling)have lost a(wow gold) jockey; To be a jockey, we lost a war victory. This is the first (Rolex)under general minyan at(World of Warcraft gold) first glance, but careful consideration, you(wow power leveling) will find that it contains a layer of the important essence of life: learn to give up, have a maturity. To a mati Tie and eventually lead to (wow gold)lose a war, this is not know how early to give up the consequences. Wise said: two disadvantages of the value comes light, the right to( World of Warcraft gold)choose the two-phase benefit. a folder to be the tail of the gecko already know how to give up the tail, the preservation of(wow power leveling) life, let alone we are full of (power leveling)the wisdom of mankind? ! in everyone's life, always (powerleveling)have in the face of choice, a choice, there is bound to give up, we have to learn is to( power leveling)pay a painful price, to give up local interests and preserve the overall interests. In chess, there are not "abandoning single-car" this trick? as the saying goes: not old, not new. sometimes, even (power leveling)the most precious things to know in good time to give up. when you( powerleveling)graduated from junior high school, in the face of a sincere friendship, you(powerleveling )will Yiyibushe. But think back, and only bid farewell to middle school, high school usher in a(rs gold )new life, can meet new friends. The recent shift is not on this? Finally, a celebrity's life motto In( gold wow)conclusion: Life is like theater, everyone is their own lives in the only director. Only Institute of choice, people will know how to give up the Chewu life, Xiaokan life, the life Habitat has Seasky.