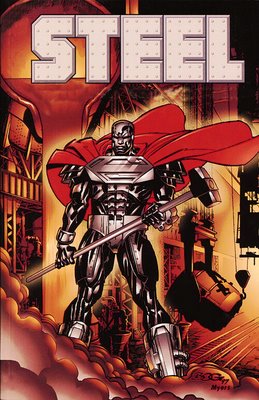 This week’s 52 back up feature told the origin of Steel, in eight panels drawn by the character’s co-creator Jon Bogdanove (Man, when was the last time you saw him draw anything?). Writer Mark Waid uses necessarily broad strokes, but seems to have left out some of the most key elements of Steel’s character and history, including his pivotal role in the “Reign of the Supermen” arc and his years with the Justice League.

Perhaps most disturbing was the last panel, which summarizes Steel’s current state—rather than a normal man wearing a suit of super-armor of his own design, he currently has the ability to transform his skin into stainless steel. This is a plot point in 52, but one I had hoped would be resolved before the maxiseries ends. Not only was his armored, caped look much more distinctive, but it seems quite key to his character.

It’s no coincidence that his creators Louise Simonson and John Bogdanove named him after the steel-driving American tall tale hero who died striving to defeat a machine. As a normal man fighting among supermen, John Henry Irons was, like his namesake, a symbol of the awe-inspiring potential within the human body and will. As a normal man wearing technologically advanced armor, he seems to have bettered his namesake—he isn’t competing against a machine, he’s conquered machinery, and it now serves him.

What troubles me about that last panel is that when DC eventually collects 52 into a trade (and oh, what an ugly graphic novel it will make, with the constant shifts in art style and quality), they’ll leave these back-ups out, probably publishing them in their own Secret Origins or Who’s Who trade (With “The History of the DCU” being a feature kicking the book off). It would certainly make for a nice reference guide to the current state of the DCU’s characters (or at least 42 of them). But if they’re thinking that far ahead (and they should be) then that means they’re thinking Steel will still be like this then, right?

Regardless, let’s get to the point of this piece, the ruminating over whether the “Essential Storylines” listed are actually essential.

The Return of Superman: No arguments there; this is reallytheSteel story, including his first appearances, his origin and his alliance with Superman. In the wake of Superman’s “death” at the hands of Doomsday, he was one of the four men who stepped up to take Superman’s place, and was easily the most heroic. If you read one story about Steel, this should be it.

Steel: The Forging of a Hero: I wouldn’t really recommend this trade paper back collection (the cover of which is above), but I can understand why it’s on the list. It’s the only trade collecting any solo Steel stories. I’ve read his monthly sporadically, and while I liked some single issues, it’s hard to recommend any particular storyline from it (The Christopher Priest run, which closed out the monthly series, however, was probably the best). The Steel monthly suffered the same fate as its sister books Supergirl and Superboy: constant reinvention. Steel repeatedly changed villains, supporting casts, settings, costumes, missions and his very reason for being; he would gain powers and lose them. This trade was released to coincide with the release of the film featuring the character, and, were it not for the film, I doubt this trade would have ever even been considered.

52: Well, obviously this is an essential storyline starring Steel. But it seems rather odd to list it as such, in the back of 52, doesn’t it? Obviously Steel fans who want to follow the advice listed in the title’s “Essential Storylines” feature are already reading this particular storyline, right?

Team Superman: This is the name that Superman’s three S-wearing allies occasionally went by for a time. In The Mark Millar-written Team Superman #1, Steel, Superboy and Supergirl help save Supes from an alien hero-killer. In the “Trial of Superman” storyline, they form a “Superman Rescue Squad” to help save him from aliens who have put hi on trial for the destruction of Krypton. In four-part “Critical Condition”, they shrink down to microscopic size (with help from the Atom) to go inside Superman and save him, Fantastic Voyage-style.


The JLA: I consider all of Grant Morrison’s JLA run—the trades, DC One Million, JLA: Earth 2 and JLA/WildCATS—essential reading, but as far as Steel goes, he joins the team in JLA #16, and stays with it through the end of the Morrison, Howard Porter and John Dell run in JLA #41 (Volumes 4, 5 and 6, in terms of trades). Of those, perhaps the most Steel-centric single story is the lead feature from JLA Secret Files & Origins #2, by Christopher Priest. It features Steel’s niece Nat and her friend “Boris” climbing into Steel’s League transporter and helping themselves to a tour of the Watchtower, eventually convincing John Henry he belongs on the League. I agree, and it’s a shame he ever left it. I hope once 52’s over, he gets his seat at the table back again—the League needs a tech guy, and Blue Beetle’s dead and the Atom’s missing. Outside the main monthly, Steel also appeared in Mark Waid and Brian Hitch’s wonderful over-sized graphic novel JLA: Heaven’s Ladder, and in Len Kaminski, Val Semieks and Prentis Rollins’ weird but fun JLA: Foreign Bodies, a Freaky Friday riff in which John Henry Irons and Kyle Rayner trade bodies (as does the rest of the League).

Crises: In Zero Hour, Steel teams up with Guy Gardner (revealed to be an old college buddy), time lost Barbara “Batgirl” Gordon and Supergirl. He teams with the Teen Titans, Aquaman and other heroes who had low-selling books at that point to help Superman Red and Superman Blue defeat the Millennium Giants near the conclusion of the much-maligned “Electro-Supes” storyline. He plays a somewhat more important role in DC One Million, which is essentially just a JLA story that sucked the rest of the DCU into it. When the Big Seven travel to the future, their counterparts attack the Watchtower, and Steel leads the rest of the League’s JV squad against them. In Our Worlds At War, John Henry Irons is slated to die and death actually comes for him (in the form of the Black Racer, the Grim Reaper as a skiing Black Knight), and ends up in Apokalyptian armor. Steel continuity goes goofy after this storyline, which is probably why DC didn’t list it as “essential;” they pretty much just ignored it at the outset of 52 anyway.

Other Universes: In Mark Waid and Alex Ross’ Kingdom Come, Steel has switched alliances between Superman and Batman. How or why isn’t ever explained, and Steel’s role is nothing more than a cameo, but he gets new Bat-shaped armor and a Bat-shaped battle axe in place of his hammer. The switch in loyalty makes sense from the perspective that Steel is more of a Batman-type hero than a Superman-type; that is, he’s just a normal, powerless joe who uses his mind and body to elevate himself to the level of a natural born superman. Darwyn Cooke also includes Steel in his New Frontier story set in the late ‘50s, and that particular time period in American history results in Steel being a very, very different sort of hero.

Other media: John Henry Irons met Superman in Superman: The Animated Series, and was a member of the JLA in Justice League Unlimited. There was also a 1997 Steel movie starring Shaquille O’Neal, but don’t you dare watch it. I’m serious, no matter what—don’t watch that movie!
Posted by Caleb at 7:37 PM