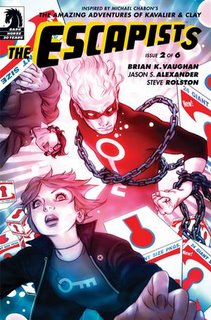 52 #14 (DC Comics) Steel and Nat get the beautiful J.G. Jones cover this week, as we check in with Dr. John Henry Irons to find out why he hasn’t been in the title much lately (Is anyone in the DCU having a good year?), but most of the issue is devoted to Montoya and the Question’s story, which is about to run headlong into Black Adam’s. It’s glaringly odd that Montoya narrates her own scenes, while we don’t see the thoughts of any other character in the entire series; I may be alone in this, but I do wish good comics followed the same rules of point of view and narration consistency that all other forms of good fiction do. Word of the week: Unelongated. This week’s back-up is the origin of Metamorpho, illustrated by the born-to-draw-Metamorpho Eric Powell. It’s an odd week for this particular origin to run, as Rex was in last week’s issue and isn’t in this weeks at all, and it seems odd that Powell didn’t draw either Simon or Sapphire Stagg in any of the eight panels he had to work with, but at least we got to see the one-eyed alien the Thunderer, from the highly recommended Showcase Presents: Metamorpho Volume 1.

A Man Called Kev #2 (WildStorm/DC) A very talky issue of the continuing adventures of ex-S.A.S. homophobe Kev Hawkins. Writer Garth Ennis can do no wrong, just right and less right. This series has been a bit of the latter thus far.

Civil War: Frontline #5 (Marvel Comics) In Paul Jenkins’ A story, “Embedded,” both Sally and Ben seem to get evidence that there’s a conspiracy involved in the Superhuman Registration Act, and both are about to pay a price for their discoveries. No idea where this is going yet, but it gets more exciting each issue. In the B story, Robbie “Speedball” Baldwin gets shipped off the S.R.A.’s version of Gitmo, a robot-run institution in the Negative Zone. The C story, “Sleeper,” has SHIELD calling in Wonder Man, and the D story, one of those insulting and pointless comparisons between real wars and Marvel’s superhero crossover, I just simply ignored.

Conan and the Songs of the Dead #2 (Dark Horse Comics) Joe R. Lansdale was born to write Conan, and Timothy Truman was born to draw him (um, among the other things the two men were no doubt meant to accomplish during their time here on earth), so thank God Dark Horse gave them the chance to do so and, better yet, to do it at the same time. I didn’t hear any songs in this issue, but there were plenty of dead, most of whom Conan and his current sidekick proceeded to kill somewhat further.

Devi #2 (Virgin Comics) After a somewhat slow start in back story heavy #1, things get more interesting in #2. If nothing else, it’s educational (I learn more and more Indian mythology and slang with each Virgin issue), and has great art from Mukesh Singh. Oh, and a nice Greg Horn cover this time around.

The Escapists #2 (Dark Horse) Maybe it’s just the Cleveland setting and the many familiar Cleveland references—The Cinematheque! The Flats! Parma! The Indians!—reacting predictably with my Northeast Ohio roots, but I love this book. Brian K. Vaughan, who seems to be writing half of the best comics on the shelves right now, has done the seemingly impossible in updating and adapting the basic story of Michael Chabon’s The Amazing Adventures of Kavalier & Clay to a modern setting. Confidential to Vaughan: I’d buy a Bridge War of 1836 comic.

JSA: Classified #15 (DC) Okay, it’s only two issues into this story arc, but I’m already bored to tears by it, perhaps because I’ve already read a half-dozen issues about “stellaration” and Amos Fortune this summer, or perhaps because I’ve seen the members of the JLA and/or JSA fighting one another in arenas three times too many already.

Martian Manhunter #1 (DC) I went into this book expecting to hate it: Writer A.J. Lieberman has written some of the very worst Batman stories of the past few years, the new re-design for the title character hurts my eyes and seems ridiculously out of character, and the teaser in Brave New World was terrible. So I suppose the fact that I didn’t hate this issue is something of a recommendation in and of itself. I don’t quite understand why J’onn decided to change his look into a sort of Skrull/Conehead/BDSM hybrid all of a sudden, particularly when he notes it makes his job a lot harder, and I’m still unenthused about the “Everything you know is wrong!!!” approach, but Lieberman builds a decent atmosphere of paranoia and acknowledges past history rather than simply ignoring or rewriting it (See The Creeper #1). Sweet logo, too.

Secret Six #3 (DC) It took Gail Simone a little too long to bring the conflict into focus (it was never really explained why the Six remain together, and what they’ve been up to all missing year), but the main antagonist makes himself known here. The best part of the series, even at it’s worst (last issue) has been it’s wonderful characters and Simone’s wonderful way with them. Here we get plenty of that loveable lunatic Ragdoll, and some of the coolest Mad Hatter scenes I ever read. Seriously, committing hat-themed crimes is one kind of crazy, but making tiny hats to put on all of the fruit in the kitchen? That’s stone cold, crazier than the Joker on laughing gas psycho. I love it. Not only do I want a Secret Six ongoing when this mini wraps, I think I want Ms. Simone to do a Mad Hatter ongoing as well.

She-Hulk #10 (Marvel) Awesome cover. I wish this title would go back to ignoring Civil War now, but even if it seems much less focused now, it’s still a pleasurable enough read.

Spider-Man Family: Featuring Spider-Man’s Amazing Friends #1 (Marvel) Okay, I’ll just get my gripes out of the way first: I wish Marvel would have just called this Spider-Man Family #2, and that they could have kept the number of artists on writer Sean McKeever’s original feature story down to one (and Nick Dragotta at that), but otherwise this was a fun blast of Spider-Friends nostalgia, a must-read for anyone who grew up with Spider-Man and his Amazing Friends like, um, me. Adding bang to your almost-five-bucks are a “Mini-Marvels” tale by McKeever and Chris Giarrusso, a reprint of an old Kurt Busiek-scripted Untold Tales of Spider-Man (basically, what Ultimate Spider-Man would have been were it in continuity), another reprint issue of Peter David’s Spider-Man 2099, and another of Fred Hembeck’s weird Petey Parker gag strips. Buy ten copies, and maybe we’ll get a Spider-Friends ongoing.

Superman #655 (DC) Arion of Atlantis?! In Superman?! I don’t understand it, but I like it. He travels to the future from his past to lend Superman a helping hand, and it looks like he’ll need it. An old colleague seems to have guessed his secret identity, and some sort of unstoppable alien is making life hard on him. Its name is Subjekt 17. Not as catchy or properly spelled as “Doomsday,” but Subby sure seems to hit about as hard as the gray goliath did.

Ultimate Spider-Man Annual #2 (Marvel) God, I love annuals, as long as they’re well done, and this is one hell of a well-done annual. (In general, sharing a writer with the monthly seems to go a long way towards doing them right). It lacks the emotional highs and dramatic pay-off that last year’s annual boasted, but it recaptures the wild, anything-goes spirit of Brian Michael Bendis’ recent “Warriors” story arc. When Ultimate Kangaroo makes a move on Ultimate Kingpin’s territory, Ultimate Punisher, Ultimate Daredevil, Ultimate Moon Knight and Ultimate Spider-Man are literally falling over one another to smack him down. Plus, another appearance of fan favorite Ultimate Shocker, plus, is this the introduction of Ultimate Speedball? Still not as goofy as Mark Millar’s Ultimate Power Man, Bendis.
Posted by Caleb at 8:46 PM