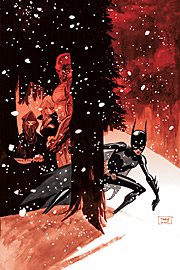 I was pretty surprised when I saw Batgirl: Destruction’s Daughter on the Diamond shipping list for release this week, as I have no idea why DC would actually want the stories within that trade collection to be read by any more readers.

Not because they’re not any good (Re-reading Andersen Gabrych’s three story arcs that comprise the collection this week in one sitting, I was reminded what a strong send-off it actually was for the character, bringing her personal story to a close while clearing her from the board to simplify the sprawling Bat-mythos).

No, I was surprised because it’s downright impossible to enjoy Adam Beechen’s debut story arc as the regular Robin writer after reading “Destruction’s Daughter.” As I’ve pointed out before here, Beechen’s arc presents Cassandra “Batgirl” Cain in a completely opposite manner than the way in which she was presented throughout the entire run of Batgirl, particularly in these last story arcs, "Destruction's Daughter" and "Blood Matters."

For example, in Robin, Tim follows a subtle clue left for him to find Cassie. Inside a fake Batgirl costume that Lynx was dressed in, Tim finds a tiny roll of paper, with Navajo writing on it. In narration, Tim tells us that Batman taught he and Cassie Navajo just in case they ever went up against the Signal Man. Which is odd, because in "Destruction’s Daughter," Oracle and Batgirl again discuss her inability to read (any language, let alone Navajoh), and Oracle even runs experiments on Cassie’s brain, determining that it’s possible for her to learn to read, although it will be difficult.

In Batgirl #67, part two of “Destruction’s Daughter,” Cassandra visits the Bronze Tiger in Detroit, and he lays out to her David Cain’s attempts to train an ultimate assassin in the past. First he tried training a whole crop of kids, but it failed, and he put them all down, the last of which was likened to a “mad dog.” He then tried raising a “few” from infancy, as he did with Cassandra, but ultimately decided that genetics must be the key, and he therefore decided to try with his own child, Cassandra. Near the climax of the Destruction’s Daughter trade, Cassie even faces off against one of these other children of Cain’s, Mad Dog.

In “Destruction’s Daughter,” Nyssa al Ghul and Shiva try to thrust leadership of the League of Assassins on Cassie, but she repeatedly refuses. She’s uncomfortable with killing, obviously, but also with leadership of any kind. When she smashes up Nyssa’s operation and the League-in-training divides into two factions, one looks to Cassie for leadership. It’s a role she’s very uncomfortable with, owing to her poor language skills, and she stumbles through giving them the most basic instructions.

But one year later, in the pages of Robin, not only has she apparently mastered her language skills, never pausing for an elipses as she did throughout the run of her own book, but speaking in complete sentences. She’s also taken over the League of Assassins, and now acts as it’s leader.

More troubling though is her sudden decision to start killing again. Though she was trained from birth to kill, after she committed her first murder, she freaked out and ran away from Cain, spending almost a decade as a mute runaway. After she became Batgirl, succeeding Batman became her number one ambition, although she still felt she was unworthy of life, having taken one herself (a duel to the death with Lady Shiva during which she had a near death experience cured her of this).

Throughout "Destruction’s Daughter” and “Blood Matters,” she continually re-asserts this belief:

“My heart only knows one thing…killing is wrong. No matter what. Or who. Isn’t it?”

“Killing is killing. And killing is wrong.”

Throughout this last storyline, the villains and supporting characters like Alpha tell her that she must kill, it’s her destiny to kill, and some of them even make the argument that killing is actually the moral thing to do in some cases, if you’re taking a life from someone who would go on to take many more lives themselves.

Cassie seems to become convinced of this at the end, when she agrees to another fight to the death with Shiva, pausing to ask how many Shiva has killed since the last time they fought. And certainly the “Isn’t it?” in the quote above shows that she was at least mildly confused about the absolute “Killing is wrong” line that Batman follows wholeheartedly.

But though she technically kills Shiva, breaking her neck and then impaling her on a hook that immediately begins to rip through her flesh, that hook is over a Lazarus Pit, which magically restores those immersed in it to life (indeed, Shiva appears in Robin even before Cassandra does).

The last page of Destruction’s Daughter says that Cassandra Cain was “born to be something unlike the world had ever seen. A dancing hunter,” an metaphor for her assassin’s training used throughout the last three issues of the series, “But she didn’t want that.”

And yet one year later, she’s doing just that. She also takes lives left and right. She claims to have killed Nyssa, Lynx and Annalea, and either she or David Cain broke the necks of the various ninja henchmen that had assaulted Robin.

It’s perhaps worth noting that between the end of Batgirl and the “Boy Wanted” arc of Robin, DC (unwisely, in my opinion) rebooted their continuity. As part of Infinite Crisis, DC continuity was temporarily unraveled, and then violently put back together, with changes big and small having occurred. So, in effect, Batgirl continuity, like all other DC continuity, was destroyed and rebuilt during the crisis, and the changes to it haven’t been revealed.

It’s quite possible then that contrary to what Oracle said in pre-Infinite Crisis continuity, Cassie could learn language and had learned Navajo in the new post-IC continuity. It’s possible that she was a better speaker and more charismatic leader than we thought. And it’s possible that she really did want to be leader of the League of Assassins after all, and that she didn’t really regard killing as such a big deal after all.

But if that’s the case, why on earth would DC publish Batgirl: Destruction’s Daughter at all? If something was so wrong with Batgirl continuity that it needed to be erased and changed during the Crisis, then why continue to introduce these broken stories to new readers? Clearly one of these storylines is no longer true and should not be read; by publishing this in trade format, DC seems to be implying that it's the Robin arc that gets Batgirl wrong.